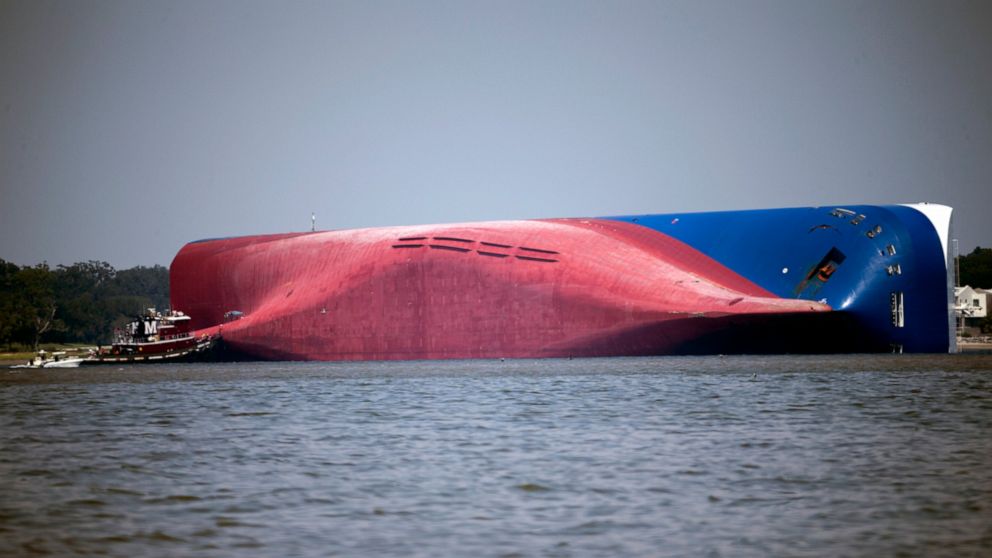 SAVANNAH, Ga. – When salvage crews began disassembling the overturned Golden Ray, a wreck the size of a 70-story office building with 4,200 cars inside its cargo decks, in early November they predicted that the demolition could be completed before the New Year. . Day.

Four months later, the job is far from done.

Both ends of the freighter have been cut off and carried by barges in a pair of giant chunks. But roughly three-quarters of the ship remains stranded on its side off St. Simons Island off the Georgia coast, where the South Korean freighter capsized shortly after leaving port on September 8, 2019.

“There has been nothing but trouble here,” said Andy Jones, a St. Simons Island resident who heads to the wreck site in his small fishing boat most days to monitor the demolition and post updates on a news channel. Youtube. “It’s a disappointingly slow pace.”

Salvage experts decided more than a year ago that the Golden Ray, which is 656 feet (199 meters) long, was too large to remove intact. They settled on a plan to divide the ship into eight huge chunks, each weighing up to 4,100 tons (3,720 metric tons).

They straddled the wreck with a towering crane with a winch and pulley system attached to 400 feet (122 meters) of anchor chain that acts like a dull saw blade, piercing the ship’s hull with brute force.

From start to finish, each individual cut was supposed to take only one day. Considering the time required to load each cut ship section onto a barge and prepare for the next cut, the multi-agency command overseeing the effort predicted the job would take eight weeks.

It turned out to be much more difficult.

The first cut began on November 6 and lasted three weeks. When lifting the bow section of the ship, battered cars and SUVs were found in orderly rows and layered on the inner decks. The second cut started a month later, on Christmas Day, and was finished in a week.

Crews spent the entire month of February attempting a third cut through the ship’s engine room, a section fortified with thicker steel. After stress on the cutting apparatus forced extensive maintenance, the rescue team stopped with the cut only half finished.

They spent days moving the crane to the other end of the ship, where they began cutting a new section on May 7 as they reconsidered plans to complete the unfinished one.

The ship’s steel has proven to be stronger than anticipated, slowing down the process, and crews have paused for additional inspections and maintenance, said Coast Guard Petty Officer 2nd Class Michael Himes, command spokesman for multiple agencies that oversee the demolition.

“If people wonder when it will be done, we will do it as quickly and safely as possible,” Himes said. “But fast takes a backseat in security.”

He said the last part of the ship may be heading for the junkyard in June, the first month of the Atlantic hurricane season. Workers have taken steps to make the cut more efficient, using torches to remove the lining strips from the ship’s hull and form a guide for the cutting chain. They are also using a large mechanical grapple to start cars from inside the boat and lose weight before cutting and lifting the sections.

Conservationists worry that the longer the wreck remains in St. Simons Sound, the greater threat of contamination it poses to the area’s waterways, beaches and salt marshes.

The wreck site is surrounded by a mesh barrier intended to contain debris for cleaning once large sections are removed. Boats equipped with skimmers and absorbent barriers stand by to clean up any oil leaks or other contaminants.

Still, bumpers, tires and other auto parts falling from the ship have been found on the beaches. Oil-covered birds have been found. And while most of the fuel has been drained from the ship’s tanks, there are concerns that the remaining approximately 44,000 gallons (166,500 liters) could gush out once the cutting chain cuts the ship’s fuel line.

“The longer something stays in the water, the boat or these cars, the more it breaks down,” said Susan Inman, a coastal manager for the Altamaha Riverkeeper conservation group. “You have lead paint on your boat. You have all these plastic parts, a lot of these things will be around for years.”

When the demolition of the Golden Ray began in November, the project had already been delayed for several months due to a busy hurricane season and a handful of coronavirus infections among members of the rescue team.

Ironically, the commanders at the wreck site insisted on removing the ship in large chunks because it was supposed to be faster. A year ago, the command fired its original salvage contractor for wanting to dismantle the ship into smaller pieces, saying it would take too long. The abandoned company filed a lawsuit in federal court, but a judge refused to stop the salvage after agreeing there was no time to lose.

Paul Hankins oversaw the planning of a smaller-scale demolition of the Golden Ray until his employer, Donjon-SMIT, lost his job to a competitor. Since then he has left the company. If his team hadn’t been fired, Hankins said, the capsized ship would now be a memory off the Georgia coast.

“We would be done,” Hankins said. “Here we are a year later, and we are nowhere near.”