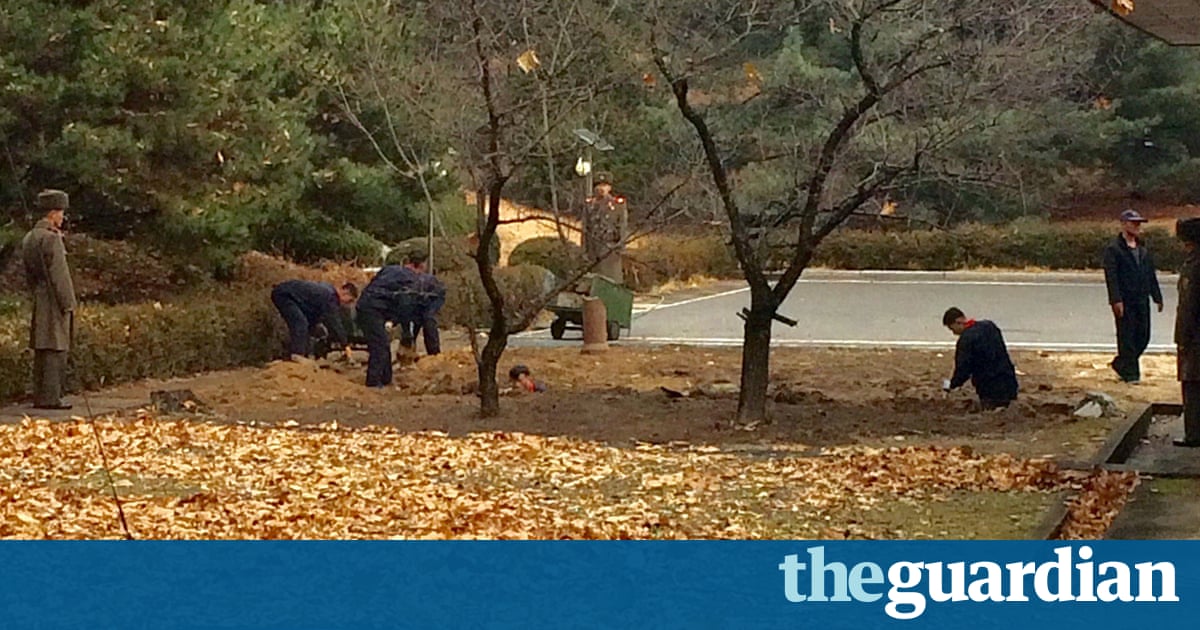 North Korea fortified its border with the south in what appears to be the place where one of its soldiers made a dramatic bid for freedom earlier this month.

A photograph posted on Twitter by the acting US ambbadador to South Korea, Marc Knapper, showed a small group of civilian workers, guarded by North Korean soldiers, digging a deep ditch when the defector left his vehicle and crossed the line of demarcation that separated the two countries on November 13.

Images from the security camera released by the UN command last week show that the soldier, known only by his surname Oh, leaves the vehicle after trapping him in a shallow ditch.

Then he crosses the border into the joint security area [JSA] while his compatriots shoot him from behind. The soldier, who received five shots, collapses in a pile of leaves near a wall, before being dragged to safety by South Korean forces.

Oh is in stable condition after undergoing operations to treat his wounds and eliminate parasitic worms, according to Lee Cook-jong, a surgeon at Ajou University Hospital in southern Seoul.

Desertion is a big propaganda coup for South Korea. Any attempt to flee the North through the large 2.5-mile demilitarized zone [DMZ] that separates the two countries is rare; that involved a supposedly loyal soldier of North Korea is particularly shameful for the Pyongyang regime.

North Korea has not made public comments about the desertion, but seems to have taken action against the border guards that allowed the soldier to cross the demarcation line. in the border village of Panmunjom.

Observers noted that different guards were on duty after the incident, although it was not clear what had happened to those present during the desertion. There are usually between 35 and 40 North Korean guards on duty at the JSA, which is jointly administered by the United Nations command on the south side and North Korea.

Japanese media said there were unconfirmed reports that the senior military officer in the office of the North Korean representative in Panmunjom had been called to Pyongyang for questioning about desertion.

The North has also erected a gate on the bridge that the soldier used during his high-speed trip to the JSA, according to the Korea Times, citing an unnamed intelligence source. The regime has also placed more machine guns in the area.

The bridge was temporarily closed while the new checkpoint was being placed, in an apparent attempt to monitor the soldiers entering and leaving the JSA and avoiding further military defections.

South Korea and its allies have tried to exploit the desertion. General Vincent K Brooks, commander of the UN command, awarded Army commendation medals to six South Korean and American soldiers for their role in the operation to rescue Oh.

They include the three soldiers who came to their aid while lying wounded, according to the Facebook page of the United States Armed Forces.

The armed forces of South Korea broadcast news of the desertion through loudspeakers located throughout the strongly armed demilitarized zone. The transmissions, which can be heard up to 20 km from the border, give details of the condition of the deserter

and also refer to the poor health of the soldiers in the North.

South Korean military officers will ask Oh as soon as he has recovered from his injuries. A decision has not yet been made about who will pay their medical bills, which are expected to exceed 100 million won (US $ 92,000).