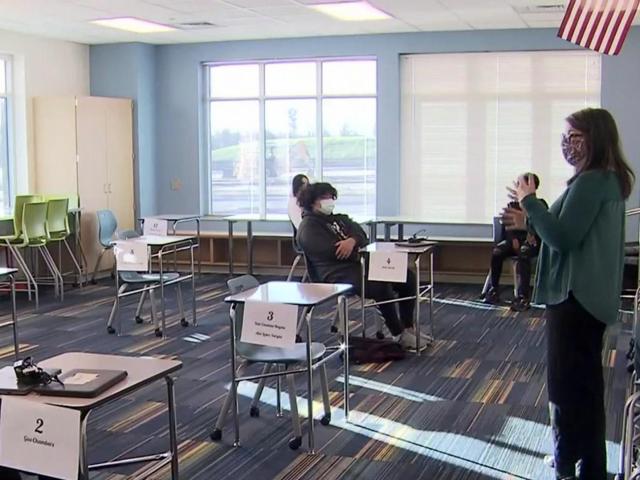 Raleigh, North Carolina – With the push to reopen schools in North Carolina, teachers are being given a higher priority to get vaccinated against the coronavirus.

Governor Roy Cooper said Wednesday that all K-12 school personnel and anyone who works in child care will be eligible for vaccines beginning February 24. All other “essential” front-line workers, such as police, firefighters and supermarket workers, will have to wait until March 10 to start getting vaccinated.

The state has administered nearly 1.5 million injections in the past two months, meaning that about 10.6 percent of state residents have received at least one dose of the two-dose regimen. About 3.5 percent of the state is fully vaccinated.

Group 3 needs to be subdivided on the state’s vaccination priority list, the governor said, to balance the limited supply of vaccines with the large number of frontline workers in the state.

North Carolina receives just 150,000 doses of vaccine each week from the federal government, and the state has about 240,000 public school employees.

Previously, state officials said they had no plans to divide Group 3 into smaller units and prioritize some professions over others. But Cooper said putting teachers in front of Group 3 was just pragmatic.

“There has been concern from all these essential front-line workers in a large group, in Group 3, suddenly crashing into the system, that that would be problematic,” he said. “Starting with fewer essential Group 3 workers helps providers optimize vaccine delivery.”

Group 3 could be further subdivided in the coming weeks, depending on the flow of vaccines to the state, the governor said.

“This essential worker category is much more complicated because there are so many people who are doing very important front-line jobs,” he said. “The [state’s] The healthcare team is going to discuss … if they can open all the [Group 3] categories or if they have to go to another subpart “.

Dr. Mandy Cohen, secretary of the state Department of Health and Human Services, said the prospect of a third vaccine being approved in the coming weeks could allow most of Group 3 to be eligible at the same time without dividing other professions separately.

“We really have to look at supply to meet the demand that exists,” Cohen said.

Micki McCarthy, manager of Weaver Street Market in Raleigh, said her staff is excited to learn that they will soon be eligible for vaccination.

“It’s all buzz,” McCarthy said with a smile. “It will give us peace of mind knowing that we serve our community every day without the fear of contaminating ourselves with the virus.”

Cooper and Cohen repeatedly emphasized that research has shown that schools can safely reopen if masks and other safety protocols are followed. Therefore, vaccinating teachers and other school personnel is not a prerequisite for reopening, they said.

“Schools can get students safely back to the classroom right now, and that’s what I want them to do,” Cooper said.

But teachers have backtracked in recent days, saying they didn’t want to put themselves and their families at risk for COVID-19.

“Yes, the data shows that transmission is low in schools, but it can still be transmitted in schools,” said Michelle Burton, elementary school librarian and president of the Durham Educators Association.

Burton’s group was one of many educational organizations fighting for a higher priority of vaccinations for school personnel.

Burton lives with his elderly father, who has diabetes, and she said she is concerned it could infect him. Getting vaccinated will add protection to both him and her, she said.

She said that those who think that teachers just don’t want to go back to schools are wrong.

By announcing the schedule for vaccinating educators, followed by other front-line workers, counties and healthcare providers can vaccinate as many Group 1 (healthcare workers) and Group 2 (individuals) as possible. 65 and older) before the next group begins, the governor said.

Vaccinating people 65 and older is “critical,” he said, noting that that age group accounts for more than 80 percent of North Carolina virus-related deaths.

The two-week notice also gives school districts and employers time to develop vaccination plans. Cohen said providers could go to a school or workplace to administer the vaccines, or they could designate a specific day of the week that only educators or other front-line workers could receive the vaccines. The state’s immunization tracking system will soon allow employers to upload employee information for pre-registration, he said.

Cohen cautioned, however, that the eligibility dates of February 24 and March 10 do not necessarily mean that people will begin receiving vaccines at that time. Some counties have long waiting lists of Group 1 or Group 2 people still waiting for their shots (Wake County’s list has more than 80,000 people, for example), so teachers and other front-line workers will have to wait your turn, he said.

“Just being thought about and made a priority is just the first step, the right step,” Burton said.