Nick Saban: ‘We are not supporting any candidate’ 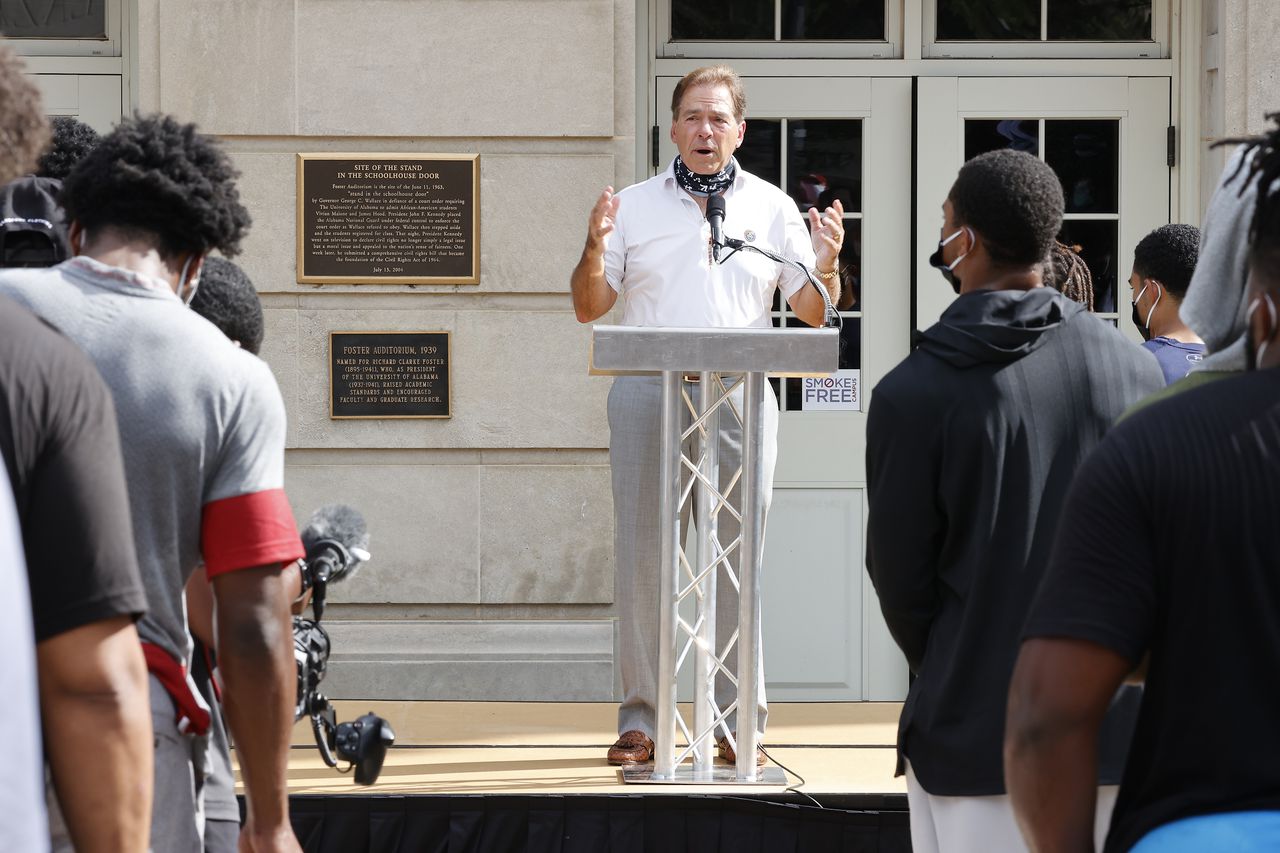 Alabama coach Nick Saban said on Tuesday that he would not support the candidate in the upcoming presidential election, but is encouraging his players to register to vote.

“We have had many voter registration education programs here,” Saban said recently as part of his video news conference opening statement. “Alabama Athletics’ civic engagement initiative is something that we are trying to continue to create awareness of how important it is to vote or to everyone. I am very proud of my players and for voting His response to, should be.[ing] They are prepared and educated on how absentee voting can be. So I am very happy with it.

“And I know it’s out there – I can tell you that we are not supporting any candidate. I have never endorsed any candidate, nor will I ever support a candidate or Either way I will join politics. I don’t think this is my place. “

Saban made national headlines last week when he passed in front of a group of Alabama athletes marching on the University’s Tascalosa campus to support the “Black Lives Matter” movement and racial equality. Tyde’s coach was praised by some players, but faced a social-media backlash from some fans who claimed Saban was involving himself in politics.

The video states, “As a team, we felt like it was going to be really important to get everyone to vote.” “So we think it’s important that everyone has a voice, because more than ever this year, it’s more important to get your voice out there, no matter who you’re voting for. . “

Saban echoed the message on Tuesday.

He said, “I think it’s very important that every American has a voice and uses their opportunity to vote so their voice is heard.” And I will encourage everyone to do this and I will certainly do so. I absent it and I don’t even know that Election Day is sometimes – we have a game that week, I get that. But I think it is important that everyone creates awareness for the importance of being able to do this, and our players have done a good job.

Saban referenced the comments made in 2016, when he said he did not know Election Day had taken place, but later clarified that he had voted absentee and was too busy to vote the person on Election Day.

Although Saban said on Tuesday that he has never supported the candidate, he appeared in a 2018 video ad for Senator Joe Manchin of West Virginia during his election campaign.

“I don’t have a better friend or who knows a better man than Manchin,” Saban said of Manchin, a former governor of Saban’s home state of West Virginia, whom one of the most politically liberal Democrats in the Senate is believed. Saban made a rare political donation of $ 2,400 for Manchin’s initial special election campaign in 2010.

Saban seems to tread carefully about the political implications of his involvement in last week’s march. In his first news conference after the event, Saban said “we’re not going to let it die” and critics say, “I don’t have an opinion about everyone’s opinion.”

But Saban also emphasized that he believed his players supported the “concept” of racial equality and were not necessarily organizations with political motivations.

“I don’t think they have ever come out and say they support any organization – good, bad or indifferent,” he said. “They support concepts of things that can be done in the future.”

“Black Lives Matter” is a widespread social movement that acquitted Trayvon Martin’s death in 2013 and his accused killer, George Zimmerman. A special organization advocating this movement is the Black Lives Matter Global Network.

“I told the players, I said, ‘You know, if we’re going to do that, I want it to be positive about the things we all can do to make changes in the future. Negative. Not about being, criticize people. What happened in the past, and that’s what they wanted to do and I think they did a really good job. “

Saban is not the only coach on Alabama’s campus to push for voter registration before the November election. Men’s basketball coach Nate Oates told AL.com in June that he challenged his team to 100 percent participation in the election.

Mike Rodak is an Alabama Beat reporter for the Alabama Media Group. Follow her on twitter @mikerodak.