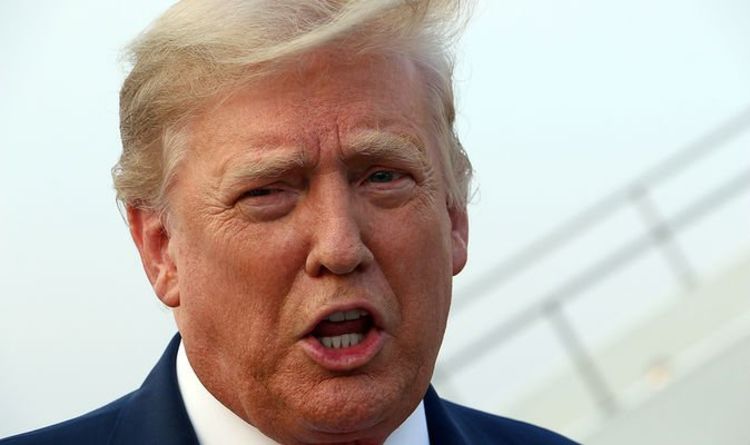 Shocking claims come from Bob Woodward, who interviewed Mr. Trump 18 times for his upcoming book Rage. In 2017, before the visit due to inclement weather, the US president was set to visit Korean demilitarized territory to meet with Mr. Kim. Mr. Trump eventually met with the North Korean leader at the DMZ in 2019 to discuss increasing the dangers of nuclear war.

The US president believed that he had not returned from a visit to the Korean DMZ.

According to everyone’s book, Mr. Trump “kissed Melania goodbye” before the flight ended.

He said to Mr. Woodward: “I woke up this morning, and said Melania, kissed her goodbye, and said, ‘I don’t see you again.'”

Mr. Trump also added those helicopters to the DMZ: “It’s not that I’m worried about myself.

“If something were to happen to the President of the United States, it would be the worst thing that could happen to our country.”

But his November visit as president was canceled and his entry was affected by bad weather.

The book details how the helicopter slowed down as it approached the DMZ, with Mr. Trump asking if they knew I was coming.

Mr Woodward said the helicopter pilot had to slow down due to dense fog, which he describes as flying through “pea soup”.

South Korean President Moon Jae-in was expected to join the US president, but had to cancel the trip for the same reasons.

Mr Trump and Mr Kim could first come face to face at the Singapore Summit in 2018.

The US president was finally able to land in the Korean DMZ in June 2019, and became the first US leader to set foot in the region.

In a letter written on 2 July 2019, Mr Trump told Mr Kim: “It was an honor to cross into your country and resume our important discussion.”

But after two years of diplomacy, Mr. Kim rescued the US in August 2019 to conduct joint military exercises with South Korea.

Mr. Woodward’s book also contains 27 letters between the US and the North Korean leader, 25 of which have not been disclosed.

The journalist also claimed in his cooks that Mr. Trump described the North Korean leader as “beyond smart”.

The US president told Mr Woodward that Mr Kim “tells me everything”.

In a shocking admission of Jung Song Thak’s murder, Mr. Trump said of Mr. Kim: “He killed his uncle and he put the body in steps.”