News from the cover and back cover of the Jersey Journal: Saturday, January 19, 2019 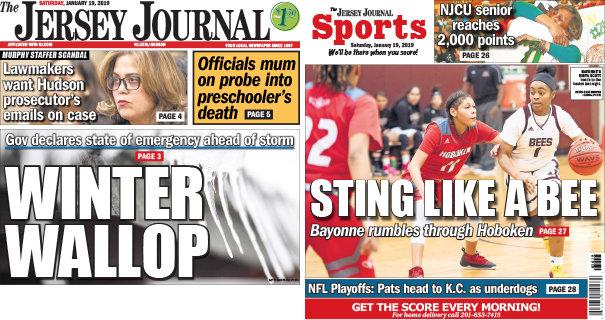 Patrick Villanova | The newspaper of jersey

Governor Phil Murphy said yesterday that he is declaring a state of emergency, today at noon, with a winter storm about to defeat New Jersey.

Governor Phil Murphy's chief of staff, Matt Platkin, became the last state official to declare yesterday that he did not know who hired Albert J. Alvarez, the former employee of the Murphy administration charged with rape, leaving the legislative committee investigating the complaints in search of answers.

State lawmakers investigating how Governor Phil Murphy's office handled the rape allegations against a senior administration staff member are in a fight with the office of Hudson County prosecutor, Esther Suarez, by emails that may raise questions about Suárez's claims that he had no knowledge of the case, NJ Advance Media learned.

The day after a preschooler died after being found unresponsive in a school in Jersey City, officials are silent about their investigation into the boy's death.

A 31-year-old criminal from Jersey City with 13 convictions and tears tattooed under his left eye tried to get out of his sentence yesterday afternoon and said, "I do not want to be here."

Lynda Blackmon Lowery was only 13 when Dr. Martin Luther King Jr. addressed her by name. "Lynda, you can make anyone do anything with constant and loving confrontations," he told her in the early sixties. Since then, those words have shaped his life.

In sports, a NJCU basketball reached the 2,000-point mark.