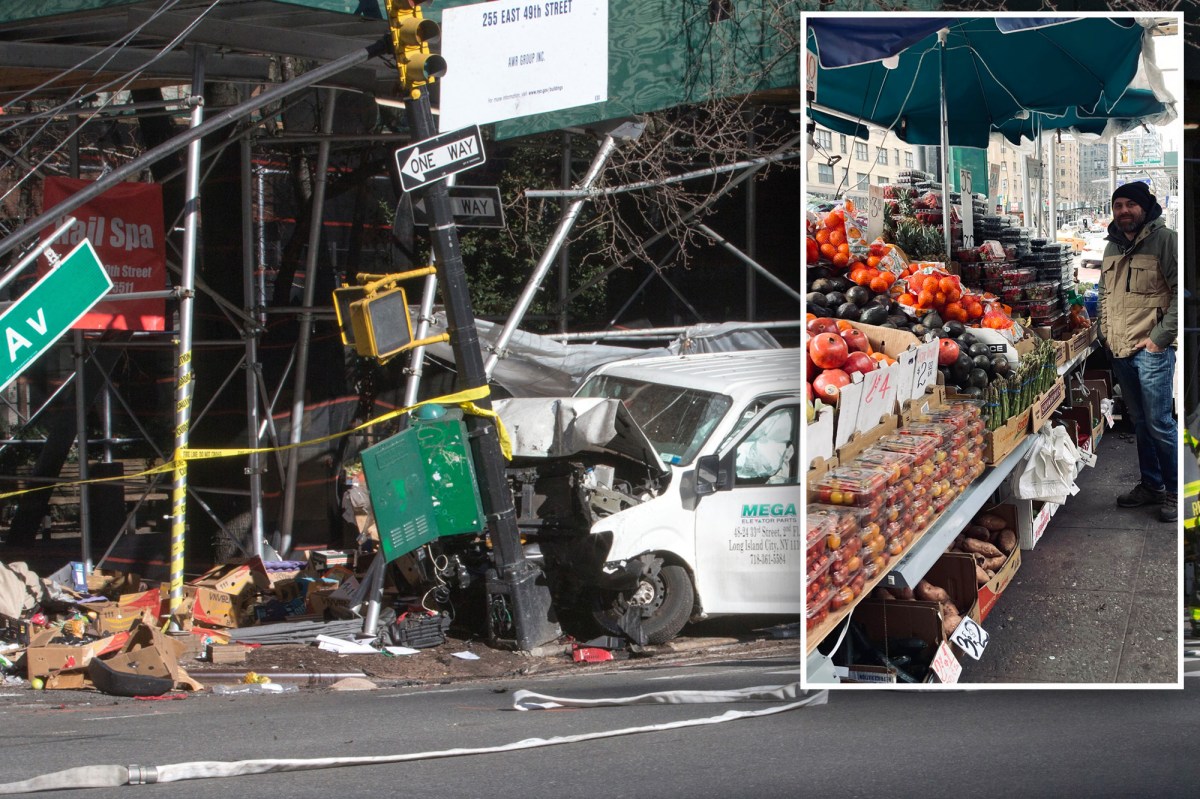 A fruit stand owner who barely escaped injury when a runaway driver crashed into his Midtown business was back up and running within 24 hours.

Ugur Dikici, 44, worked until 4 a.m. Saturday to prepare his business for clients.

Dikici got help from friends who gave her some metal stands and luckily they had extra items in her truck.

“I cannot lose a day. I have family. I have two children, 13 and 16 years old. My daughter is preparing for college. It’s hard, “ he said. “And the business is not like it used to be. In the last year, you know, the pandemic is slow. I’m here seven days a week. “

One of the survivors of the domino-like accident, George Soliman, 54, told The Post that he tried to get out of the way but was not fast enough.

The fruit stand with its contents and the scaffold fell on it. He has pain in his knees, arms, back, it hurts to turn his head from side to side.

“I see the car approaching,” Soliman recalled. “It was coming fast – crazy, crazy. It was hitting everything: boom, boom. I fell on the street. I fall flat on my face. Everything was coming at us. The fruits everywhere. The scaffold fell on my back and my knee and my arms and my fingers. Thanks God! Thanks God! I am alive. I’m very lucky “.

Soliman’s friend Sohaib Annabi, who works for Dikici, was also injured. The 27-year-old is scheduled to get married in a few months, but was forced to take a break on Saturday.

“I am not sure when I will go back to work. Today, when I woke up, my back hurt. When I walk, I don’t walk properly, ”Annabi said.

“When I saw the video and spoke to my brother and good friend, I cried,” he said, adding, “I could have died. I wouldn’t be here talking to you. But thank God I’m alive. “

The incident unfolded around 8:30 a.m., when a 66-year-old man, later found to have suffered a medical episode, rammed his Nissan truck into a black Toyota Camry from behind on Second Avenue, causing the car hurtled across the street. dining room off East 50th Street.

Two young children, ages 5 and 7, were struck by flying debris from the empty outdoor facility at Crave Fishbar, police said.

The destruction continued for another block. The van crashed into Dikici’s fruit stand and some scaffolding before coming to a stop on East 49th Street, according to police and witnesses. In total, seven people were injured.