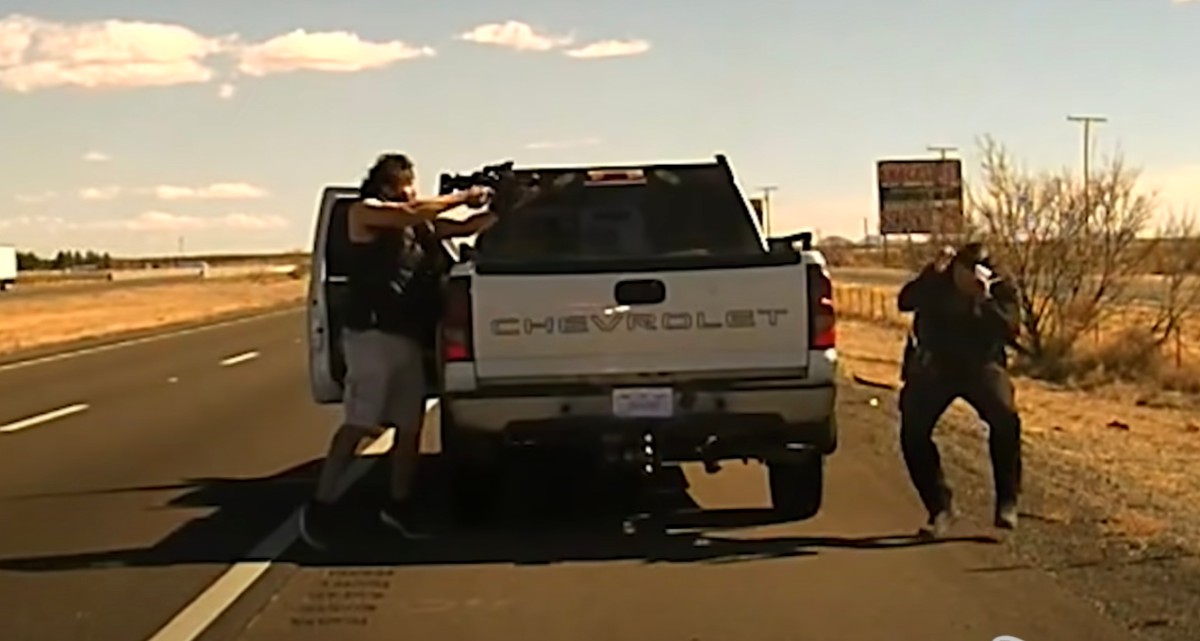 Recently released footage shows the chilling moment when a New Mexico police officer is shot and killed during a traffic stop in New Mexico.

Police officer Darrian Jarrott’s patrol dash cam video shows the state trooper approaching a Chevy pickup on Interstate-10 on February 4 and questioning the driver, who was pulled over for having the windows tinted too dark.

WARNING: THIS VIDEO CONTAINS GRAPHIC CONTENT AND LANGUAGES WHICH MAY BE ANNOYING

During a peaceful exchange that lasts several minutes, the driver identifies himself as Omar Félix Cueva and admits to having a firearm in the vehicle, according to press reports.

“Do you mind if I take it from you for my safety?” Jarrott is heard asking Cueva, according to images released by Fox News.

Jarrott, who was standing on the passenger side of the van, then asks Cueva to follow him back to his patrol car so he can read his name, when things get deadly.

Cueva gets out of the truck holding an AR-15 style rifle and opens fire.

“Oh shit!” the policeman is heard screaming before falling to the ground.

Cueva, 39, sped off, leaving Jarrott on the side of the road and led New Mexico police on a 40-mile high-speed chase, before dying in a shootout with police.

State police said Cuvea had a “violent criminal record” and was heading into a drug business when he was stopped by Jarrott, a five-year veteran of the force, KVIA-TV said.

“Even when there was a situation that was difficult, the guy was always smiling,” New Mexico State Police Chief Robert Thornton said of Jarrott after his death.

Another state trooper was injured and received treatment for non-life threatening injuries.