New image of a black hole published by astronomers 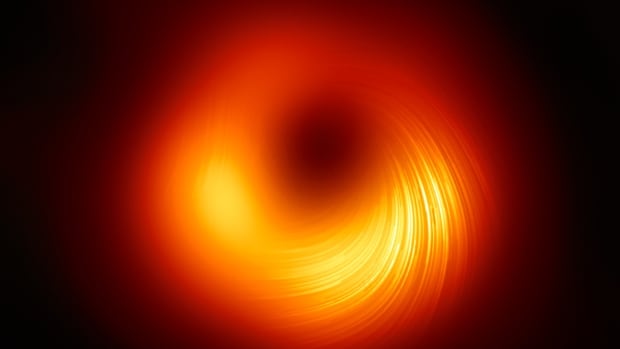 A team of international scientists including a Canadian researcher has published a more detailed image of a black hole.

The Perimeter Institute for Theoretical Physics in Waterloo, Ontario, says the new image shows the “sharp swirl” of light around the black hole as it appears in polarized light.

The institute’s Avery Broderick says that polarized light allows researchers to learn more about the magnetic fields surrounding the black hole in the M87 galaxy.

They believe the new image will further help understand how magnetic fields allow the black hole to “eat up” matter and eject powerful jets of energy.

The international collaboration is made up of more than 300 researchers who compiled the image of eight ground-based telescopes located around the world.

The new image is part of two articles published Wednesday in The Astrophysical Journal.

“When the EHT looks at polarization in astronomical sources, we really look for information on the structure of magnetic fields,” said Broderick, who is also a professor at the University of Waterloo.

The researchers said it took two years to compile the image.

“The recently released polarized images are key to understanding how the magnetic field allows the black hole to ‘eat’ matter and launch powerful jets,” said Andrew Chael, part of the team and a member of NASA’s Hubble Fellow at the Center for Theoretical Science. from Princeton.

However, the image the researchers captured is not of the closest black hole to Earth, but of one in the center of the neighboring galaxy Messier 87 that was easier to observe with a telescope. It is about six billion times the mass of our sun and is about 53 million light years from Earth. One light year equals 9.5 trillion kilometers.