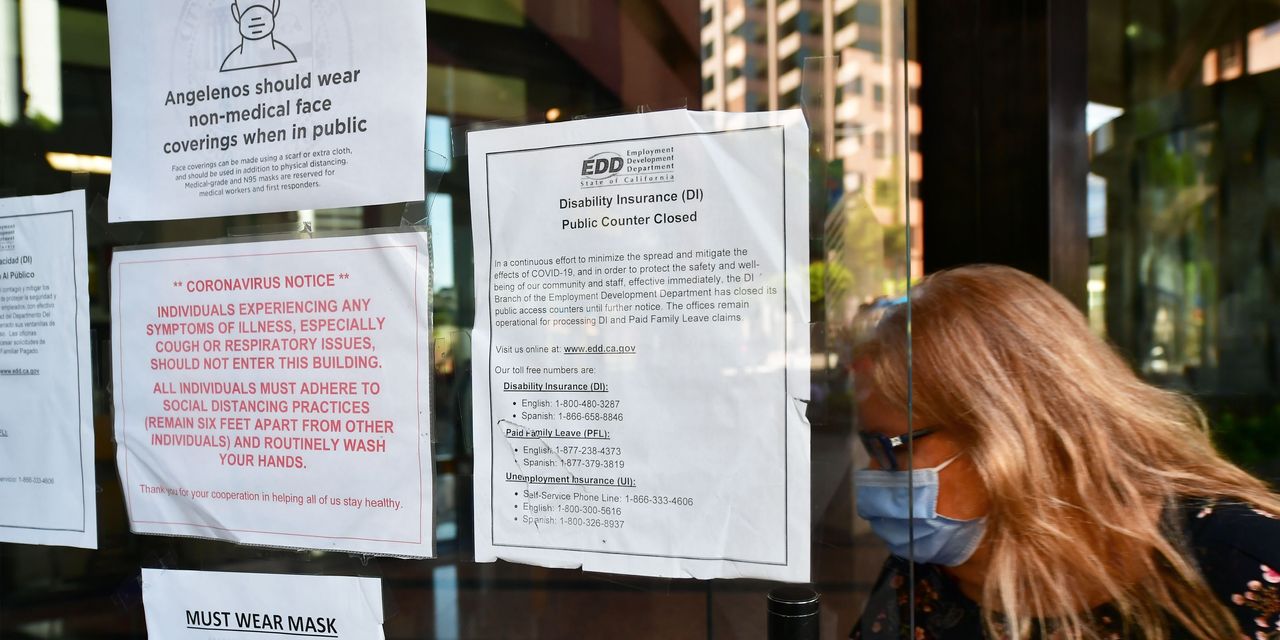 The improved unemployment benefits included in the $ 1.9 trillion pandemic relief package signed Thursday by President Biden could keep billions of dollars a week in stimulus flowing into the economy over the summer.

The plan expands two pandemic-related programs and extends supplemental payments of $ 300 to all laid off workers receiving unemployment benefits until early September, long after the effect of the $ 1,400 checks on individuals is likely to wear off. About 20 million people turned to unemployment benefits in mid-February, up from 2 million the year before, adding up to more than $ 10 billion in additional stimulus a week.

Some economists say that extending additional unemployment benefits for nearly 18 months is a disincentive for some people to return to work, preventing industries such as logistics, construction and certain retailers from finding employees as the economy recovers.

Other economists say the payments have provided a boost to many low-income families, who have lost jobs disproportionately in the coronavirus pandemic, while in turn returning money to the broader economy. The United States had 9.5 million fewer jobs in February than the previous year, according to the Labor Department.

“Things are looking up, but we still have a huge job gap,” said Heidi Shierholz, Ph.D. Economist with the Economic Policy Institute who served in the Obama administration. “Unemployment benefits will help some people get through what could still be very difficult in the coming months,” he said.

The law allows unemployed workers, including the self-employed and others who are not normally eligible for any benefits, to take advantage of unemployment assistance until September 6. With the weekly improvement of $ 300, the average weekly unemployment benefit for those who qualify through regular state programs is about $ 620 a week, according to the Department of Labor, roughly the equivalent of working full-time to 15, $ 50 an hour.

A person receiving the average level of benefits since last March would have received about $ 30,000 over the course of last year. The extension could allow that person to receive about $ 15,000 more.

Economists expect the economic stimulus and the slowdown in the pandemic to propel economic growth to about 6%, which would be the fastest pace in nearly 40 years. However, additional government spending in the past year has caused federal deficits to skyrocket and risk fueling inflation.

At the end of January, there were 6.9 million job openings in the United States, the Labor Department said on Thursday, slightly less than a year earlier, just before the pandemic took hold. But there are more jobs available in some fields.

Job search site Indeed.com said there were nearly 40% more openings in manufacturing and warehouse-type jobs at the end of February compared to the previous year. Pharmacy and construction openings increased more than 30%.

The extended benefits create an impediment to hiring employers in those industries, said Marianne Wanamaker, Ph.D. University of Tennessee labor economist who served in the Trump administration.

“By giving people an easy way out, you are jeopardizing their ability to get back into the workforce,” he said. “And we know that the longer people don’t work, the more they struggle to get back.”

Those out of work for a year or more may see their skills atrophy and face stigma around a long unemployment gap on their resumes. They also make adjustments in life, such as moving in with family members, that can lead to them leaving the workforce, Dr. Wanamaker said. “A mismatch between labor supply and demand is a recipe for higher inflation and slower economic growth,” he said.

Recent guidance from the Department of Labor makes it possible for some workers to decline job offers and stay with benefits if they believe the workplace is unsafe. Generally, laid off workers must actively look for a job to receive unemployment benefits. Some people have not restarted their job search because their children’s schools have not fully reopened or because they are concerned about getting sick.

Dr. Shierholz said that most people would opt for a permanent job rather than keep temporary unemployment benefits that would end in September. “And if people take a little longer to find a job, that can be good for them and for the economy,” he said. “They can find a job that suits their skills and interests, where they can be more productive and probably pay more.”

Some employers say the $ 300 improvement provided this year is more manageable than the additional $ 600 in weekly payments included in the initial government aid package approved by Congress and signed by former President Donald Trump last year. Those payments ended in July 2020.

A handful of workers at the Hoffman Car Wash locations in Albany, NY, asked not to be laid off last spring because their unemployment benefits paid more than they made cleaning cars, owner Tom Hoffman Jr. said but said the improvement in $ 300 hasn’t caused the same problem, and you’ve recently been able to find the workers you need.

He said his business has been idle since 2019, because people drive less and some customers are reluctant to have the interiors of their vehicles cleaned, the most labor-intensive service.