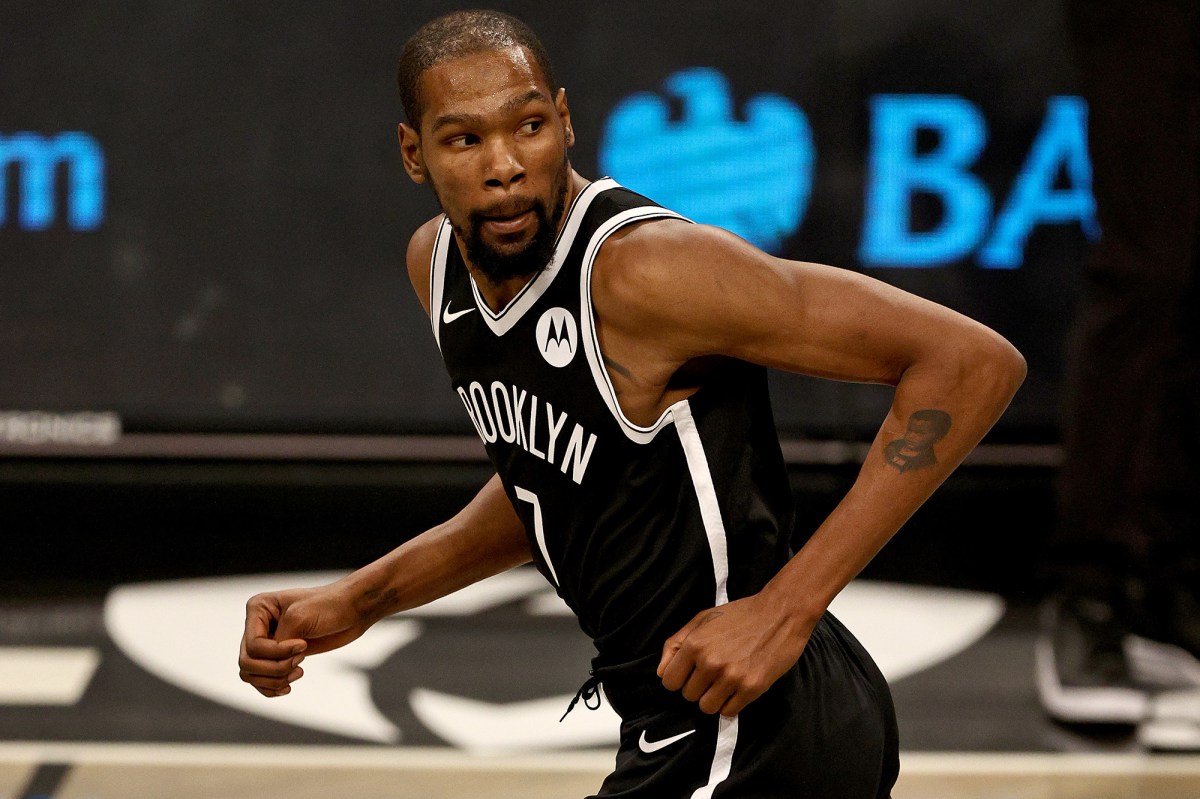 Nets star Kevin Durant will miss TNT’s big game Thursday night against the Lakers and LeBron James at Staples Center due to a hamstring injury. The Nets could get Kyrie Irving back, as the guard is listed as likely after missing his last game due to a stiff lower back.

This will mark a third straight lost game for Durant. After hurting his left hamstring, he missed the Nets’ back-to-back victories in Sacramento on Monday and in Phoenix on Tuesday.

Irving began to suffer from a stiff back during the game against the Kings and received treatment at halftime of that victory. He came back for a season-high 40 points before falling out of the comeback win the following night against the Suns.

“We’re confident it will be short-term,” coach Steve Nash said at the time of Irving’s injury.

After James Harden scored 38 points to help the Nets overcome a 21-point deficit at halftime, the largest in team history, now Irving might be ready to join him on the court against the Lakers who do not have Anthony Davis.

“Whether it’s the Lakers or any other team, that’s not exciting because we’re still working on ourselves, if that makes sense,” Harden said. “So obviously we understand the caliber of the team we’re playing. But then the whole situation is that we are working on ourselves. “

With fans allowed to be at the Barclays Center starting next Tuesday against the Kings, there is some clarity regarding the availability and price of Nets tickets.

For the three home games between next Tuesday and the All-Star Game on March 7, the Nets will welcome approximately 300 fans in what the organization calls “premium seats.” After the All-Star Game, single-game tickets will go on sale, starting at $ 150 per seat.

That sum will include the PCR tests, as the organization will cover the costs of the test and handle its logistics. A spokesman for the Nets said in a statement that Barclays “will be the first place in major North American sports” to do this. Part of the proceeds from the tickets will also be distributed to finance vaccines.

According to the statement, “Tickets for the second half of the season will go on sale to season ticket holders and the general public shortly after the NBA announces the schedule for the remainder of the season.”

With the Nets short-staffed, Tyler Johnson has improved, averaging 12 points and shooting 55.6 percent from 3-point range in his last three games.

After being out of the rotation, Johnson has played six in a row and logged at least 18 minutes in five of them. He will come into the game against the Lakers with a solid effort against the Suns, who cut him last season. Johnson had 17 points, a season high, and has shown improved defense, even against bigger foes.

“I have to have some heart. Heartless, it’s over for you. We only have a few guys that they want to protect. At the end of the day, that’s it, ”Johnson said. “You’re going to let someone intimidate you, so you have nothing to do on the court.”

Green said he took a hard blow to the chest just before halftime Tuesday and stayed out for the entire third quarter, but says he will be fine to face the Lakers.

Timothe Luwawu-Cabarrot (right knee pain) is questionable. … Joe Harris is averaging 16.6 points in his last 10 games, while shooting 58.3 percent overall and an absurd 53.6 from deep.