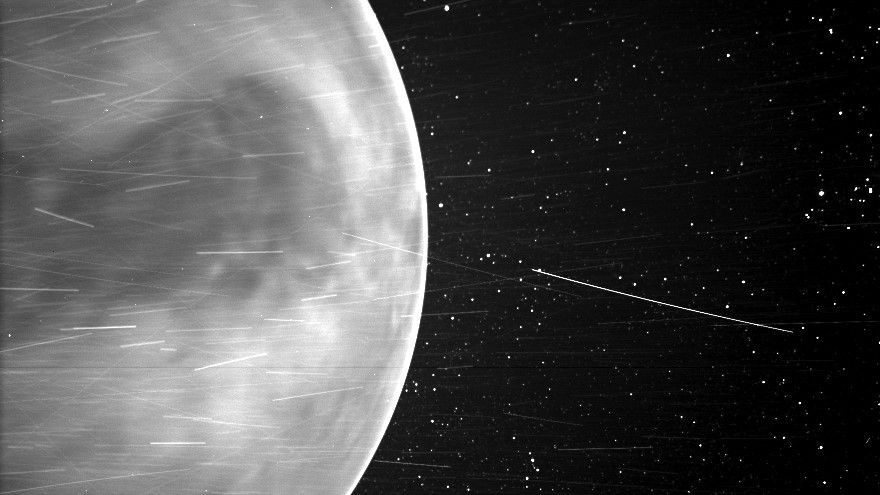 From NASA Parker solar probe it spiked its fourth spin past Venus on February 20, and mission scientists celebrated by releasing an impressive image captured during a similar maneuver in July.

Parker Solar Probe launched in August 2018 with a daring mission: to fly closer to the sun than any spacecraft before it. But on the way the probe needs to whiz past Venus a total of seven times, with each pass bringing the spacecraft closer to the sun. And while Parker Solar Probe is designed to study the sun, if a spacecraft has to pass our “evil twin” planet anyway, it might as well turn on the instrumentsthe team thought.

On July 11, 2020, the spacecraft was conducting its third flyby of Venus, zooming 7,693 miles (12,380 kilometers) from the planet, according to a statement from NASA. During the maneuver, the team turned on the spacecraft’s Wide-field Imager for Parker Solar Probe (WISPR) instrument to take a look at Venus, with astonishing results.

Related: A string of planets glows in photos from 3 different solar probes

WISPR is designed to capture distant visible-light images of phenomena surrounding the sun, such as the solar wind constantly shooting charged particles from the sun through the solar system or coronal mass ejections that spew droplets of matter into space. according to NASA.

So this isn’t your typical planetary glamor shot – no color, no intricate clouds, no cosmic sharpness.

But it’s a fascinating sight from Earth’s neighbor, and one that scientists are still analyzing, according to the NASA statement. The bright edge around the edge of Venus may be light from individual oxygen atoms in the upper atmosphere of the planet pairing up, creating what is known as a night glow, as it occurs on the shady side of the planet.

The stripes that can be seen across the image also provide a puzzle. Some may be traces of cosmic rays, while others may be dust reflecting sunlight onto the camera, and some may be tiny particles from the spacecraft itself, spewed out by shocking dust.

But the highlight is Venus itself, which is nothing like what scientists expected to see with WISPR. “WISPR is designed and tested for visible light observations,” Angelos Vourlidas, the WISPR project scientist at the Johns Hopkins Applied Physics Laboratory (APL) in Maryland, said in the statement. “We expected to see clouds, but the camera looked directly at the surface.”

Specifically, the instrument captured differences in the surface temperature of Venus. The dark spot in the center of the planet’s image is a huge mountainous region that scientists call Aphrodite Terra. Here, scientists know that the rock is cooler, about 85 degrees Fahrenheit (30 degrees Celsius) compared to nearby regions, according to NASA.

WISPR seeing this temperature difference could mean that something strange is happening in the thick atmosphere of Venus that allows the instrument to see through the clouds. Or it could mean that WISPR can actually pick up some near-infrared light that it wasn’t technically designed to see, which could create new opportunities to observe the spacecraft’s primary target, the sun. “Either way,” Vourlidas said, “some interesting scientific opportunities await us.”

To determine which scenario is at stake, WISPR took similar photographs during Parker Solar Probe’s fourth flyby of Venus, which took place on February 20. At the time of closest approach, at 3:05 p.m. EST (2005 GMT), the spacecraft approached 1,500 miles (2,400 km) from the surface of Venus, according to a NASA statement.

However, those images will not reach Earth until the end of April. The spacecraft’s next milestone will be a close approach to the sun on April 29; its next flyby of Venus is scheduled for October 16.