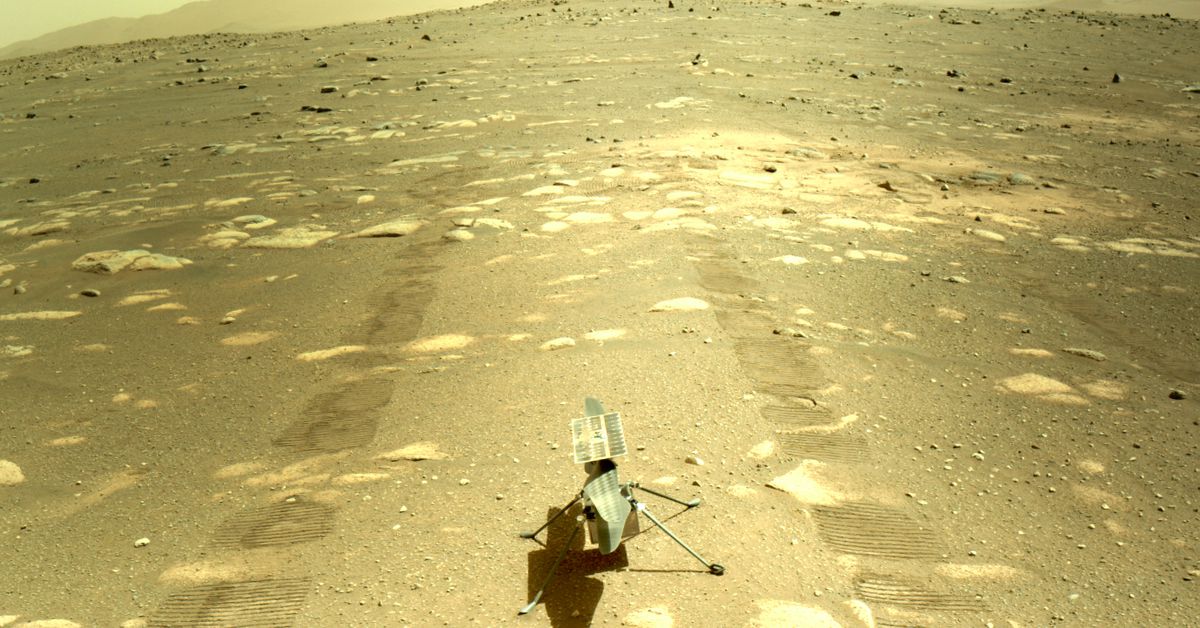 NASA’s Ingenuity mini helicopter survived its first night alone on the surface of Mars after Perseverance left it on Saturday. Enduring frigid Martian temperatures, the newly deployed helicopter passed a major independence test, giving engineers the confidence to proceed with a series of warm-up exercises in preparation for its maiden flight this weekend.

“That was one of the big, huge accomplishments that we were looking forward to, and now we can move on to the rest of the mission,” Teddy Tzanetos, Ingenuity’s deputy director of operations, said Monday on a NASA live broadcast. And now we are alone. We are a separate spacecraft on Mars with our own energy. “

The four-pound spacecraft, powered by solar energy, arrived at Mars attached to the belly of NASA’s Perseverance rover on February 18. The rover dropped Ingenuity’s protective cover last month to begin a meticulous week-long deployment process that concluded last weekend, with Ingenuity’s four landing legs firmly planted on the Martian surface for the first time. Soon after, Ingenuity’s 13-megapixel camera took its first image of the ground.

Perseverance receded, starting the helicopter’s 31-day clock to perform five flight tests and become the first craft to achieve powered flight in another world. Its maiden flight is currently scheduled for Sunday, April 11, and confirmation of whether the attempt was successful came through the Mars data pipeline to Earth the next day.

Engineers at NASA’s Jet Propulsion Laboratory confirmed that Ingenuity survived the frigid night temperatures on Mars of around -130 degrees Fahrenheit on Monday morning, after the helicopter sent signals to the Mars base station, a communications center aboard the Perseverance.

For its first flight test this weekend, Ingenuity will soar almost 10 feet from the surface and stay in place for about 30 seconds. It will rotate while suspended to demonstrate fluid motion, then begin a gradual descent to land. Engineers expect to receive images of Ingenuity’s hover on the morning of April 12, along with a wealth of data about the flight.

Perseverance broadcast images of Ingenuity shortly after dropping it off at its “helipad,” a small space on one side of its runway-shaped flight zone. Subsequent testing within Ingenuity’s 30-day trial window includes flying up to 16 feet and rapidly advancing within the flight zone. The helicopter will not carry out any scientific missions during its stay on Mars; Engineers have emphasized that this is just a flight demonstration.

Ingenuity’s twin-rotor system, spanning four feet, will spin in opposite rotations at a speed of 2,400 rpm to achieve lift in the ultra-thin atmosphere of Mars.

Despite the helicopter’s small and lightweight design, it should be totally independent of power now that it has been disconnected from Perseverance’s power source. To do this, the spacecraft has a solar panel on its propellers that powers six lithium-ion batteries in its body the size of a tissue box, which also houses a computer about 100 times more powerful than Perseverance’s, and small heaters. To keep warm through the cold Martian nights.