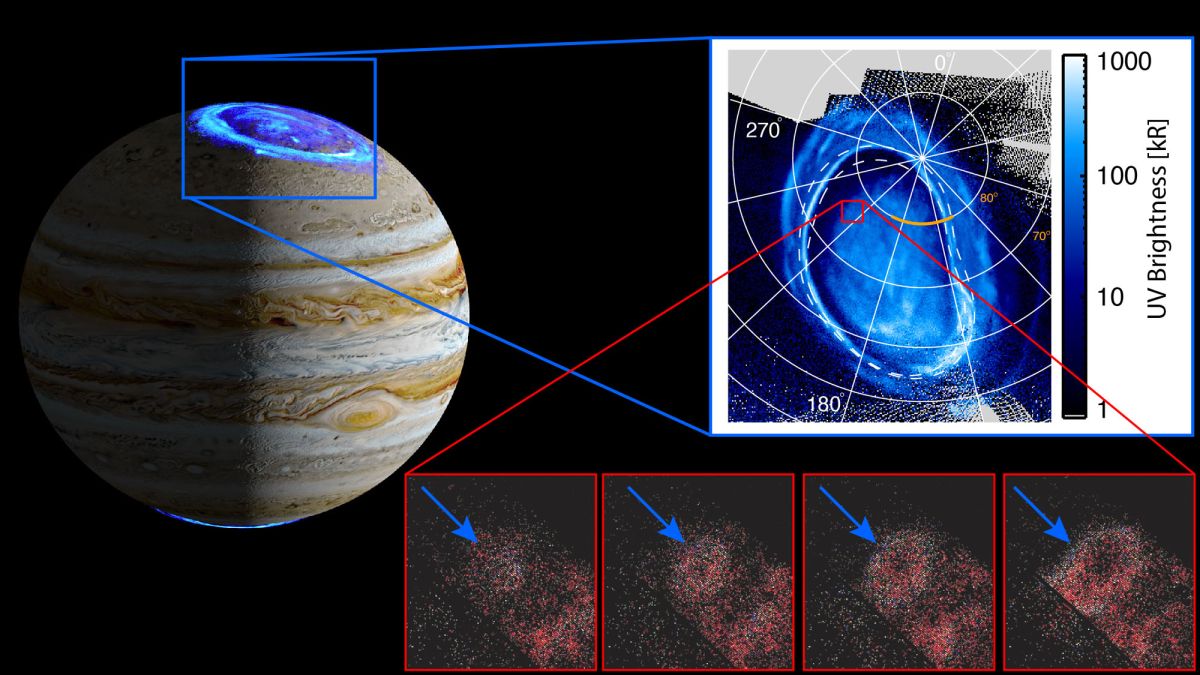 NASA’s Juno mission has detected new auroral emissions on Jupiter that appear to ripple over the planet’s poles.

The Juno spacecraft’s ultraviolet spectrograph (UVS) captured this bright phenomenon, which is characterized by faint, ring-shaped emissions that expand rapidly over time at speeds of between 2 and 4.8 miles per second (3.3 and 7.7 kilometers per second). Researchers at the Southwest Research Institute (SwRI), where Juno’s UVS instrument was built, suggest that these auroral emissions are caused by charged particles coming from the edge of Jupiter’s massive magnetosphere, according to a statement from the institute.

“We believe that these newly discovered faint ultraviolet features originate millions of miles from Jupiter, near the boundary of the Jovian magnetosphere with the solar wind,” said Vincent Hue, lead author of the study, in the statement. “The solar wind is a supersonic stream of charged particles emitted by the sun. When they reach Jupiter, they interact with its magnetosphere in a way that is not yet well understood.”

Related: The bright auroras of the ‘dawn storm’ blazing in Jupiter’s morning skies are born in darkness

As on Earth, Jupiter’s auroras are linked to charged particles within the planet’s magnetosphere. However, Jupiter’s magnetosphere is about 20,000 times stronger than Earth’s, which means that the gas giant can deflect incoming solar winds from a distance of up to 4 million miles (6 million kilometers).

“The high-latitude location of the rings indicates that the particles causing the emissions come from the distant Jovian magnetosphere, near its boundary with the solar wind,” said Bertrand Bonfond, co-author of the study from the University of Liege in Belgium, in the statement.

The charged particles recorded by Juno’s UVS instrument appear to emanate from the confines of the magnetosphere, where plasma from the solar wind interacts with Jovian plasma. In turn, this interaction can stimulate ring-shaped features, known as Kelvin-Helmholtz instabilities, that could travel along the lines of Jupiter’s magnetic field. Alternatively, the newly detected auroral feature may be the result of day-side magnetic reconnection events, during which interplanetary magnetic fields converge, rearrange and reconnect, according to the statement.

“Despite decades of observations from Earth combined with numerous measurements from spacecraft in situ, scientists still do not fully understand the role the solar wind plays in moderating Jupiter’s auroral emissions,” said Thomas Greathouse, co-author of the SwRI study, in the statement. . “Jupiter’s magnetospheric dynamics, the motion of charged particles within its magnetosphere, is largely controlled by Jupiter’s 10-hour rotation, the fastest in the solar system. The role of the solar wind is still debated.”

Therefore, the researchers argue that more research is required to fully understand the processes that produce these newly detected ring-shaped emissions. With NASA’s Juno mission recently extended to 2025, researchers hope to study the characteristics of Jupiter’s auroras in greater detail.

Their findings appear in the March 9 issue of the Journal of Geophysical Research: Space Physics.