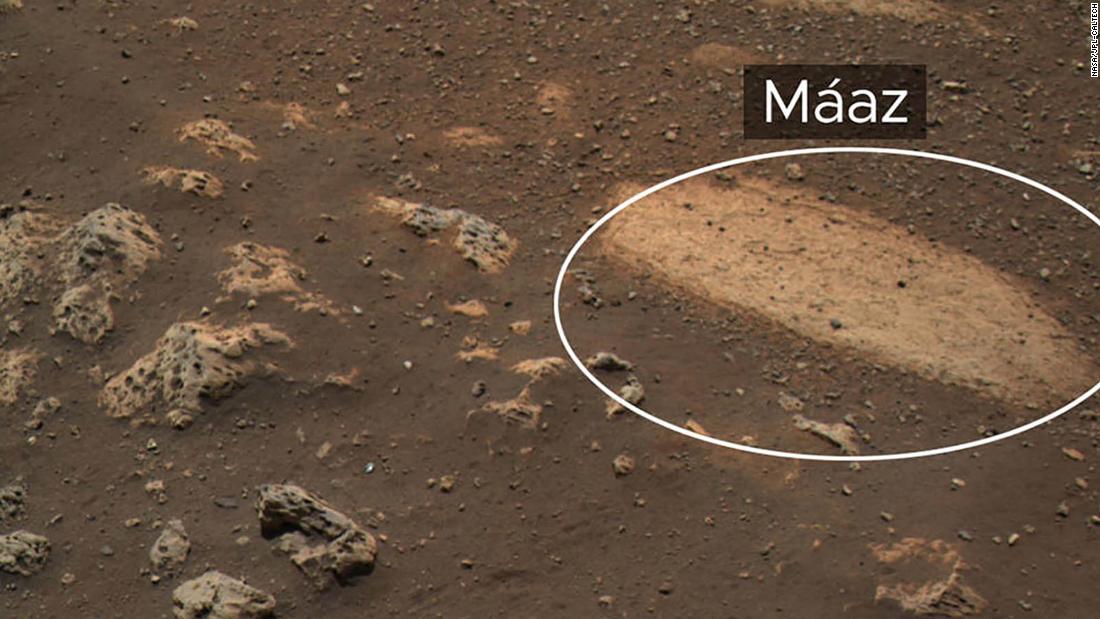 The Perseverance rover team, in collaboration with the Navajo Nation, has been naming features of scientific interest with words in the language, according to NASA. And it includes a rock called “Máaz,” the Navajo word for “Mars.”
It is common for NASA missions to give informal names to landmarks to provide mission members with a way to refer to various features of interest. And Navajo Nation President Jonathan Nez and Vice President Myron Lizer made available to the rover team a list of Navajo-language words to do so, according to a NASA press release.

“We hope that the use of our language in the Perseverance mission will inspire more of our young Navajos to understand the importance and meaning of learning our language. Our words were used to help win World War II, and now we are helping to navigate and learn more about the planet Mars, “Nez said in the statement.

The team already has a list of 50 Navajo names, including “strength” (“bidziil”) and “respect” (“hoł nilį́”). Perseverance itself has been translated to “Ha’ahóni”.

Perseverance had to be “taught” the language so it could recognize landmarks that have been labeled in Navajo, NASA said. The accent marks used in the English alphabet to convey the unique intonation of the Navajo language cannot be read by the computer languages ​​Perseverance uses. So the team is using English letters without special characters or punctuation to represent Navajo words, the statement said.

“This fateful landing on Mars has created a special opportunity to inspire Navajo youth not only through amazing feats of science and engineering, but also through the inclusion of our language in such a meaningful way,” said one Navajo engineer. of the team, Aaron Yazzie of NASA’s Jet Propulsion Laboratory in Southern California.