Myanmar: More than 160 dead in jade mine collapse | News 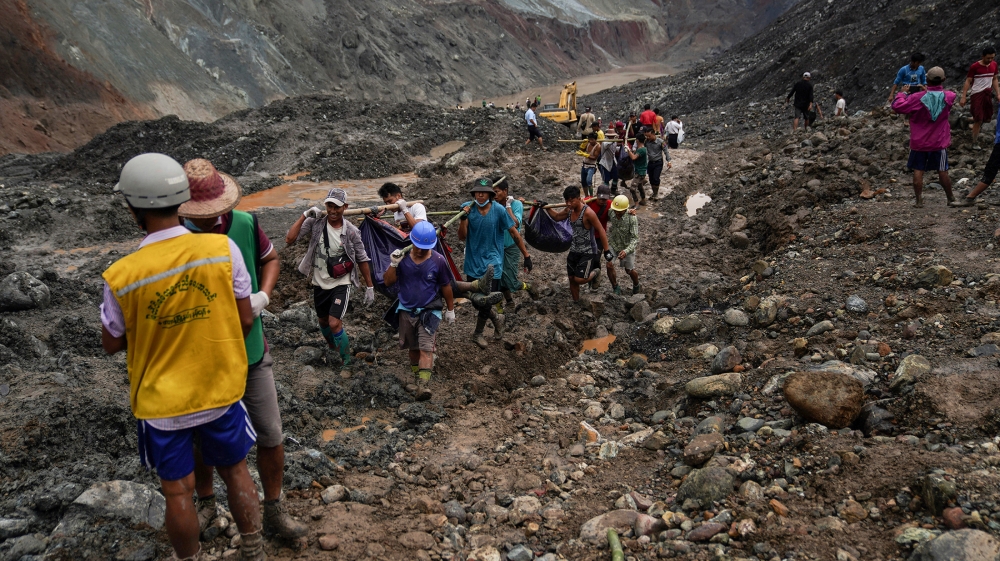 A landslide at a jade mine in northern Myanmar killed at least 162 people and injured 54 others, according to authorities, in one of the treacherous industry’s worst accidents.

The incident took place early Thursday in the japa-rich Hpakant area of ​​Kachin state after a heavy rain, the Myanmar Fire Services Department said on Facebook.

“At 7:15 pm, 162 bodies were found and 54 wounded were sent” to nearby hospitals, the Myanmar fire department said on its official Facebook page.

“The jade miners were suffocated by a wave of mud,” the statement said.

Photos posted to the Facebook page showed a search and rescue team wading through a valley apparently flooded by the landslide.

A landslide at a jade mine in northern Myanmar killed at least 113 people, after a pile of mine debris collapsed into a lake, causing a wave of mud and water that buried dozens of workers. https://t.co/StAmnORof7 pic.twitter .com / S3Fv2Tm0H3

‘No one could help them’

Maung Khaing, a 38-year-old miner from the area, said he saw a pile of trash that looked like it was on the verge of collapse and was about to take a photo when people started yelling “run, run!”

“In a minute, all the people at the bottom [of the hill] it just disappeared, “he told Reuters news agency by phone.

“I feel empty in my heart. I still have goose bumps … There were people trapped in the mud screaming for help, but no one could help them.”

Than Hlaing, a member of a local civil society group that helped after the disaster, said those killed were informal workers collecting waste from a larger mining company.

“There is no hope that the families will get compensation since they were independent miners,” he said. “I don’t see any route to escape this type of cycle. People take risks, they go to landfills because they have no other choice.”

Global Witness, the London-based environmental watchdog, said the accident “is a damning accusation of the government’s failure to curb reckless and irresponsible mining practices in the jade mines of Kachin state.”

“The government should immediately suspend large-scale, illegal and dangerous mining in Hpakant and ensure that companies that engage in these practices can no longer operate,” it said in a statement.

Fatal landslides are common in poorly regulated Hpakant mines, often the victims of impoverished communities risking their lives in search of the translucent green gemstone.

Myanmar government leader Aung San Suu Kyi has vowed to clean up the industry when he took power in 2016, but activists say little has changed.

Official jade sales in Myanmar were worth $ 750.4 million in 2016-2017, according to data released by the government as part of the Extractive Industries Transparency Initiative.

But experts believe that the true value of the industry, which mainly exports to China, is much higher.

The most detailed estimate from the Myanmar jade industry said it generated around $ 31 billion in 2014.

Northern Myanmar’s abundant natural resources, including jade, wood, gold and amber, have also helped fund both sides of a decades-long conflict between the Kachin ethnic group and the military.

The fight to control the mines and the revenue they bring in frequently traps local civilians in the middle.