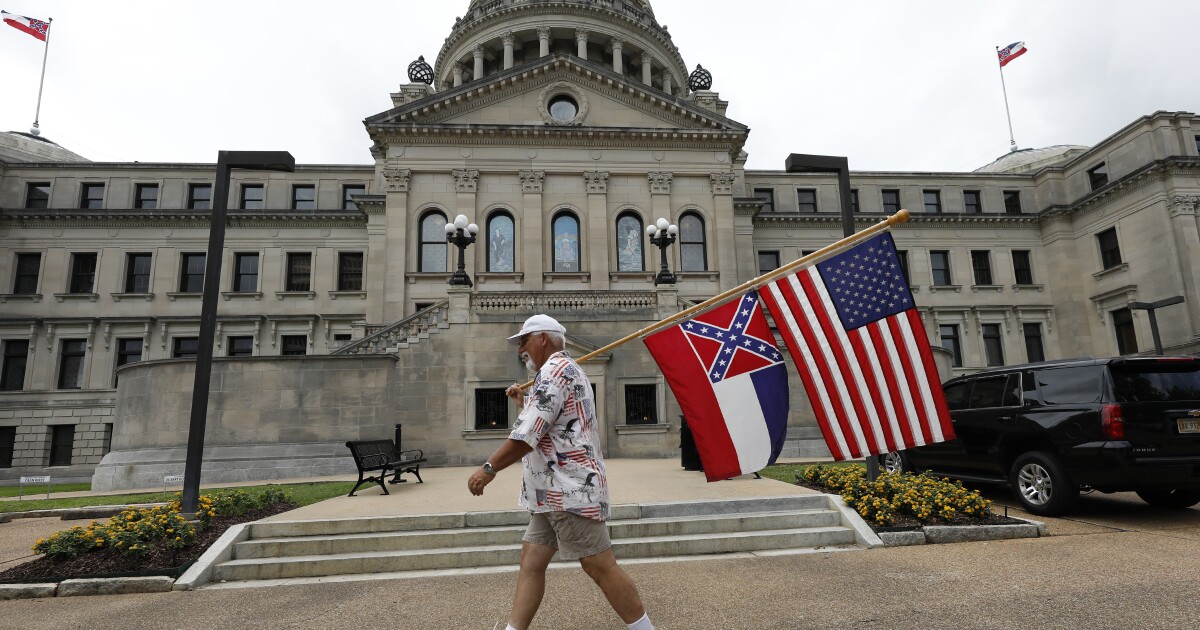 Spectators at the Mississippi Capitol erupted in applause Saturday as lawmakers took a big step to erase the emblem of the Confederate battle from the state flag, a symbol that has come under intense criticism in recent weeks amid national protests against racial injustice.

“The eyes of the state, the nation, and indeed the world are in this House,” second-ranking officer in the House of Mississippi Jason White told his colleagues.

The House and Senate voted by more than the two-thirds majority required to suspend legislative deadlines and present a bill to change the flag. That would allow debate on a bill as early as Sunday.

However, Saturday’s vote was the big test, due to the margin. It only takes a simple majority to pass a bill.

Republican Gov. Tate Reeves said for the first time Saturday that he would sign a bill to change the flag if the Republican-controlled Legislature sends him one. He had previously said that he would not veto one, a more passive stance.

“The Legislature has been stagnant for days as it considers a new state flag,” Reeves said on social media. “The discussion about the 1894 flag has become as divisive as the flag itself and it is time to end it. If they send me an invoice this weekend, I will sign it. ”

A bill will say that the current flag will be removed from state law. A commission would design a new flag that cannot include the Confederate battle emblem, but must include the phrase “In God We Trust”. The new design would be put on the ballot on November 3. If a majority voting that day accepted the new design, it would become the state flag. If a majority rejected it, the commission would design a new flag using the same guidelines.

“I know there are many good people who … believe that this flag is a symbol of our Southern pride and heritage,” said White, the House’s pro-tempore Republican speaker. “But for most people across our nation and the world, they see that flag and think it means hatred and oppression.”

Republican Representative Chris Brown of Nettleton appeared at a 2016 rally outside the State Capitol for people who want to keep the Confederate emblem on the flag. He said Saturday that the current flag and a proposed new design should go on the ballot.

“I don’t think we can move forward together if we say, ‘You can have any flag you want except … this one,'” Brown said. “If we put the current flag on the ballot with another good design, the people of Mississippi will change it. I believe that. Let’s not steal your joy. They want to show the world that they are moving forward. “

Mississippi has the latest state flag that includes the Confederate battle emblem: a red field topped by a blue X with 13 white stars.

The emblem of the battle has been in the upper left corner of the Mississippi flag since 1894. White supremacists in the Legislature placed it there during the backlash to political power that African Americans won after the Civil War.

The Mississippi Supreme Court ruled in 2000 that the flag lacked official status. State laws were updated in 1906, and parts related to the flag were not pursued. Lawmakers established a flag election in 2001, and voters upheld the rebel-themed design.

Democratic State Representative Ed Blackmon of Canton told the House Saturday that threats were made against him and others who were part of a flag design commission in 2000. Blackmon, who is black, said Mississippi needs a design without the design. Confederate so that your children and grandchildren can be vigilant when they see it.

“We will all be proud to say, ‘That’s also my flag,'” Blackmon said.

The current flag has remained divisive in a state with a black population of 38%. All state public universities and various cities and counties have stopped flying due to the Confederate symbol.

Influential business, religious, educational and sports groups are asking Mississippi to drop the Confederate symbol. Supporters of the flag say the banner should be left alone or put on the state ballot for voters to decide their fate.

People for and against the current flag filled the Capitol on Saturday.

Karen Holt of Edwards, Miss., Was with several people asking legislators to adopt a new banner with a magnolia, which is both the state tree and the state flower. She said it would represent “the joy of being a citizen of the United States,” as opposed to the current flag.

“We don’t want anything to fly over them, elevated, exalted, holding on to a deadly past,” Holt said.

Dan Hartness of Ellisville, Miss., Walked out of the Capitol with a pole with the American flag and the current flag of Mississippi. He said the state flag pays tribute to those who fought in the Civil War.

“Being a veteran is important to me: remembering these guys who fought in battle, either on the right side or the wrong side,” said Hartness.