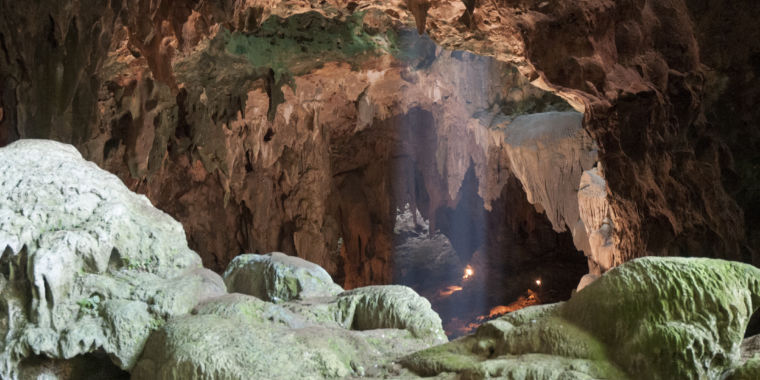 Our image of the evolution of hominids in Asia was further complicated, thanks to the discovery of a previously unknown hominid species on the island of Luzon in the Philippines. The new species, Homo luzonensis, lived at approximately the same time as the "Hobbits" of nearby Flores (Homo floresiensis).

The two species share a mixture of modern and ancient traits. Homo luzonensisThe teeth resemble those of the most recent members of our genre, Homo, but the bones of the hands and feet look more like they belong to an Australopithecine, a primitive human relative that evolved about 3 million years ago and spent as much time in the trees as on the ground, a group that includes the famous skeleton named Lucy

The combination was unlike any other species that anthropologists had seen before.

So far, all we know about Homo luzonensis comes from a handful of bones and teeth from the Callao cave in the far north of Luzon in the Philippines. The site has been a series of uranium with a minimum age of 67,000 to 50,000 years. In 2011, a team of archaeologists, led by anthropologist Florent Détroit of the National Museum of Natural History in Paris, found two bones of the toes, two bones of the fingers, seven teeth and the axis of a thigh bone ( femur) in the same sediment layer where they found a foot bone (metatarsal) in 2007. These pieces of bone are all that remains of at least two hominin adults and a child who died about 50,000 years ago. Archaeologists found two right upper third molars, which means that the teeth came from at least two adults. Meanwhile, the femur clearly belonged to a child.

Those three hominins were not our ancestors; instead, they probably descend from species like Homo erectus, which extended for the first time beyond Africa, around 1.5 million to 2.0 million years, long before the ancestors of Neanderthals and Denisovans ventured into Eurasia 500,000 years ago (only to be followed and finally eliminated by modern humans from 200,000 years ago). So you can think of Homo luzonensis as a distant cousin, one of several that may have coexisted throughout the world until 50,000 years ago.

Me, what little teeth you have!

2 million or 3 million years ago, hominids as Australopithecines and the first members of our genus, HomoIt had huge, heavy jaws and large, robust teeth, supported by powerful muscles that required thick anchor points in the skull. Over time, hominid diets changed to foods that required less work to chew, so humans and our more recent relatives tend to have smaller and less powerful jaws and teeth with more subtle anchoring points in the skull. This is the reason why some Australopithecines have fresh sagittal crests and we do not.

the Homo luzonensis Callao Cave's teeth are more like the newest members of our genre than Lucy. They are small, like ours, with simpler chewing surfaces. Its general shape is more like Homo species of the last 2 million years, although they are not as square as ours. But you can see traces of previous lineages in some other traits, such as the difference in size between premolars and molars.

In general, "Homo luzonensis It shows a pattern that is not seen in any other part of the genre. Homo", Wrote Détroit and his colleagues in an article published today in Nature. In other words, their teeth look different from any other species, so it's probably a species we've never seen before.

But on the other hand …

The few bones of hands and feet that we have since Homo luzonensis They look much more like the australopithecines. One of the bones of the fingers (the middle bone of one of the fingers of the left hand) and the bone of a toe (the base of one of the middle fingers of the right foot) are both curved, which is something that is expected to see. in the older members of our family tree, as Australopithecus afarensis. And the way the end of the toe bone would have aligned with the metatarsal (a bone in the middle of the foot) also looked more like an Australopithecine than a Homo erectus or a modern human.

"You could drop that bone between the fossils 3 million years ago in Ethiopia, in Hadar, and you could not get it out," anthropologist Matthew Tocheri, of Lakehead University, who wrote an article commenting on the discovery, told Ars. Technique "I do not think there's anyone in this field who says it looks like what you would expect from the bones of the toe of Homo erectus To look like Instead, it's exactly the opposite; you wait for the bone of the toe of Homo erectus "to look much more like our toe bones, where they are significantly shorter and the morphology has changed drastically compared to what we see in previous hominids."

The curved phalanges are usually the mark of a past life doing a lot of climbing. The bones are constantly reconstructed and remodeled throughout our lives, so that their final shape reflects the type of stress to which we subject them. If you were one of the first hominids, you would be climbing and circling the trees as often as you walked on the ground. After spending a lot of time grabbing branches with their weight hanging under their arms, the bones at the base of their fingers would bend slightly to help support the tension better. Bones of the toe curved suggest grip with the feet.

That reveals more about an individual's lifestyle than its genetics, but may suggest that Homo luzonensis He sailed the world with a mixture of walking and climbing, similar to Lucy and other Australopithecines that emerged for the first time 3 million years ago.

Of course, two fingers and two toes are not much to continue, and Détroit and his colleagues warn that we still do not have enough information about Homo luzonensis draw firm conclusions about how the species moved. But they do say that the bones are clearly more Australopithecine than Homo, and that may mean that human history is more complex than we thought.

Intrigue in the family tree

Homo luzonensis he lived and died just 2,800 km (1,730 mi) off the Indonesian island of Flores, where archaeologists discovered the fossil remains of a tiny hominin species called Homo floresiensis. Nicknamed the Hobbit, it dates from 100,000 to 60,000 years ago. That discovery hinted at a strong indication that the history of Homo erectus and their descendants among the islands of Southeast Asia could have been more complicated than we thought, and it was long before Denisovans and modern humans appeared.

"These new fossils, and the badignment of them to a new species (Homo luzonensis), fulfills one of the predictions that Mike Morwood and others (including myself) made when we first reported (15 years ago!) of the discovery. of Homo floresiensis", that other unknown species of hominids would be found in the islands of Southeast Asia," anthropologist Richard Roberts told Ars. (He is a co-discoverer of Homo floresiensis and based at the University of Wollongong.) "So, although in a way a new species in the region is not unexpected, it is exciting to see that this new material finally comes to light."

And it increases the intriguing possibility (but totally speculative, so far) that others may still be waiting to be found.

Both Luzon and Flores have separated from the nearest continent since long before the hominids ventured into the region, so the groups of hominins who arrived on the islands (possibly dragged to the coast by accident) would have been isolated for hundreds of years. thousands of years later. As a result, they were free to evolve in their own directions. The result may have been a sudden ramification of the hominid family tree into several new species. Today, they provide an opportunity for anthropologists to see how the same story unfolds, in parallel, in different tropical islands.

Homo luzonensis Y Homo floresiensis Have enough in common to suggest a common ancestor. "The skeletons of both species have anatomical features that are rare or absent in other parts of the genus. Homo but they have similarities with those of Australopithecus, "wrote Detroit and his colleagues, and it is likely that the two species share a common ancestor that they do not have in common with us, similar to the way we are more closely related to Neandertals and Denisovans than with Homo erectus. At this time, however, there is still not enough evidence to be sure, and so far there is no DNA from any of the species.

The most accepted version of this idea is that this common ancestor is Homo erectus. There is fossil evidence of the presence of the species in Asia during the correct time period that has resulted in Homo luzonensis, and there is no fossil evidence of any other hominid species in the area at the same time. When the authors made a statistical badysis of each characteristic that they could quantify, H. luzonensis It looked more like Asia Homo erectus Specimens that like any other known species. They suggest that Homo floresiensisDwarfism evolved in Flores (and we know that the same thing happened with modern humans on the island), and that Homo luzonensisThe feet and hands of the australopithecine type evolved in Luzon in a way that coincidentally resembles its previous relative.

But Tocheri, whose work focuses on the hands and feet, says that's possible, but argues that the idea that other very early members of Homo may have left Africa at approximately the same time as Homo erectus. In this view, Homo luzonensis Y Homo floresiensis they look a bit like those earlier hominids because that is, in fact, whose descendants they are. Several species like Homo habilis Y Homo rudolfensis, which evolved earlier and had more features of the Australopithecine type, still existed when Homo erectus It was beginning its expansion in Eurasia, and Tocheri says that the 2.1-million-year-old stone tools found in China last year may suggest even earlier hominid migration.

"If we have missed these species that lived less than 100,000 years ago, how much are we missing in the early stages of evolution?", Anthropologist John Hawks of the University of Wisconsin, co-discoverer of Homo Naledi, he told Ars in an email commenting on the study. "Could there have been previous dispersions that we have not noticed due to bad search strategies and bad badumptions? I would not bet against finding that hominins were out of Africa much sooner than we thought."

At this time, we do not have direct fossil evidence in one way or another, and what we have comes from the end times Homo luzonensis'Y Homo floresiensis& # 39; hour. The stone tools and the remains of animals slaughtered on both islands suggest that the hominids were there for 700,000 years. Find out if those first occupants looked more like Lucy or more Homo erectus It could help solve the family mystery.