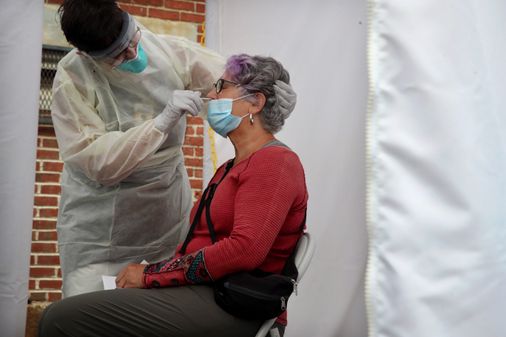 The number of deaths reported, which reflects the number reported to the state as of 10 am each day, can vary dramatically from day to day. On Friday, the number was 50, Saturday 28, Sunday 19, and Monday 35.

And while the metric may seem encouraging, officials have warned residents not to lower their guard against the virus, especially as the state heads for the July 4 weekend. At a press conference Tuesday morning, Governor Charlie Baker urged people to continue wearing face shields, wash their hands, and practice social distancing.

“We don’t want to take one step forward and two steps back as we emerge from this horrible pandemic,” said Baker.

Meanwhile, the state also reported 114 new coronavirus cases, 73 confirmed and 41 probable, in Massachusetts, with a total of 108,882.

The state also reported that new antibody tests had been completed for 918 people, bringing the total to 71,686.

Meanwhile, the four key metrics the state is monitoring to determine the rate of reopening fell, according to Tuesday’s report.

The seven-day weighted average of positive test rates decreased slightly from 1.9 percent on Sunday to 1.8 percent on Monday. It has fallen 94 percent since April 15.

The three-day average of the number of patients hospitalized for the coronavirus also decreased slightly on Monday to 748, compared to 760 the previous day. It has fallen 79 percent since April 15.

The number of hospitals using the surge capacity also fell to one on Monday. That number has dropped from a peak of more than 20 in early May and has seen a 95 percent decrease since April 15.

A fourth metric, the three-day average of COVID-19 confirmed deaths by fatality date, rather than the reported date, also decreased slightly, from 18 on Friday to 16 on Saturday. It has fallen 89 percent since April 15.

Earlier Tuesday, Baker touted the state’s performance in the numbers reported Monday, particularly the metrics being monitored for reopening, and announced that it was relaxing travel rules for people visiting the state from seven nearby states.

“Our public health information continues to show a downward trend on our key metrics,” said Baker. “Obviously, this represents solid progress as we move forward in July, and will continue to influence when and how we move forward in the next Commonwealth reopening phases.”

However, he cautioned that “COVID-19 will not be taking a summer vacation,” noting other states that have seen an alarming rise in numbers recently.

“As we have all seen, several other states are seeing a sharp increase in new cases and hospitalizations, which is a very real reminder to all of us of how contagious this virus can be,” he said.

In fact, states such as Florida, Arizona, Texas, and California have slowed or downgraded reopening measures, such as closing or suppressing bars, closing beaches, and reducing restaurant capacity, among other measures.

With new infections reported at around 40,000 a day in the United States, Dr. Anthony Fauci, the nation’s leading infectious disease expert, warned Tuesday that the number could rise to 100,000 if Americans don’t start following the public health recommendations.

“Clearly, we are not in full control at the moment,” Fauci said during testimony at a Senate hearing that focused on the reopening, citing recent news clips showing some people gathering in crowds, often without masks. “We will continue to have a lot of problems and there will be a lot of damage if that doesn’t stop.”

The UMass estimate comes from a laboratory led by UMass Amherst Associate Professor Nicholas Reich, who compiles various models of the coronavirus pandemic and develops a combined or joint forecast that is intended to reflect their collective wisdom.

Reich’s lab publishes the ensemble forecast weekly. It only creates the forecast for a four-week window ahead because it believes the forecasts are not reliable enough after that. Last week, the model estimated there would be 8,389 deaths counted by July 18.

The Reich lab publishes its data at the national and state levels in the Reich Lab COVID-19 Forecast Hub. The laboratory, which is already a Center of Excellence for influenza prognosis, collaborates with the US Centers for Disease Control and Prevention on coronavirus predictions.

The lab also feeds the data it has collected and its joint forecast to the agency, which publishes the data on its own website. The data is also used to power the fivethirtyeight.com website.

The closely watched, more forward-looking model of the University of Washington Institute for Health Metrics and Assessment offered a bleaker view, predicting that Massachusetts will see up to 10,154 deaths by Oct. 1, with a possible range of results from 9,480 to 11,402 deaths.

The latest UMass ensemble model also predicts that the United States as a whole will see a cumulative total of 147,865 deaths in the next four weeks. Last week he put the four-week number at 139,276. The current death toll in the US exceeds 126,000, according to Johns Hopkins University.

Globe staff at John Hilliard contributed to this report. Associated Press material was used in this story.