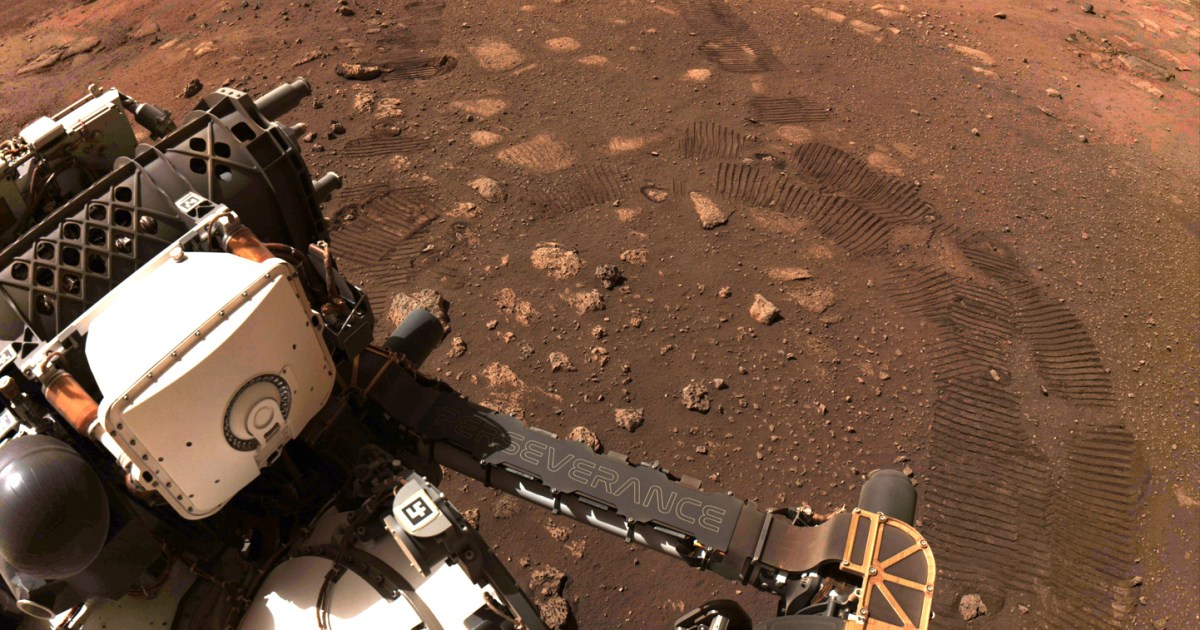 The Perseverance rover can travel 200 meters a day, but scientists must run tests and security checks before venturing further.

NASA’s Perseverance rover on Mars has made its first short trip to the surface of the red planet, two weeks after the robotic science lab’s perfect landing on the floor of a huge crater, mission managers said Friday.

The Perseverance rover first ventured from its landing position on Thursday, two weeks after landing on the Red Planet to look for signs of past life.

Following instructions from mission managers at NASA’s Jet Propulsion Laboratory (JPL) near Los Angeles, the rover rolled four meters (13.1 feet) forward, turned about 150 degrees to its left, and then retreated another 2.5 meters (8.2 feet) for a total of 6.5 meters (21.3 feet) during its half-hour test inside Jezero Crater, site of a long-lost ancient lake bed and delta of a river on Mars.

“It went incredibly well,” said Anais Zarifian, JPL’s mobility test engineer for Perseverance, during a conference call with reporters, calling it a “great milestone” for the mission.

The round-trip roundabout lasted just 33 minutes and went so smoothly that the six-wheeler was back in motion on Friday.

Perseverance is capable of driving an average of 200 meters a day.

NASA showed a photo taken by the rover showing the tread marks left on the reddish, sandy Martian soil after its first voyage.

Another vivid image of the surrounding landscape shows rugged, reddish terrain filled with large dark rocks in the foreground and a tall outcrop of layered rock deposits in the distance, marking the edge of the river delta.

I’m on the move! I just did my first test drive on Mars, covering about 16 feet (5 meters). You’re looking at the beginning of my wheel tracks. Many more to do. pic.twitter.com/7tFIwWFfJ4

So far, Perseverance and its hardware, including its main robotic arm, appear to be running smoothly, according to Robert Hogg, deputy mission director.

But JPL engineers have yet to perform additional equipment checks on the rover’s many instruments before they are ready to send the robot on a more ambitious journey as part of its main mission to search for traces of fossilized microbial life.

The team has yet to conduct post-landing tests of the rover’s sophisticated system for drilling and collecting rock samples to return to Earth via future missions to Mars.

As soon as the system checks on perseverance are completed, the rover will head to an ancient river delta to collect rocks and return to Earth within a decade.

Scientists are debating whether to take the gentler route to the nearby delta or a possibly more difficult way with intriguing remains from that era that was once watery three to four billion years ago.