Marines used the phone light to try to escape the sinking of the AAV: investigation 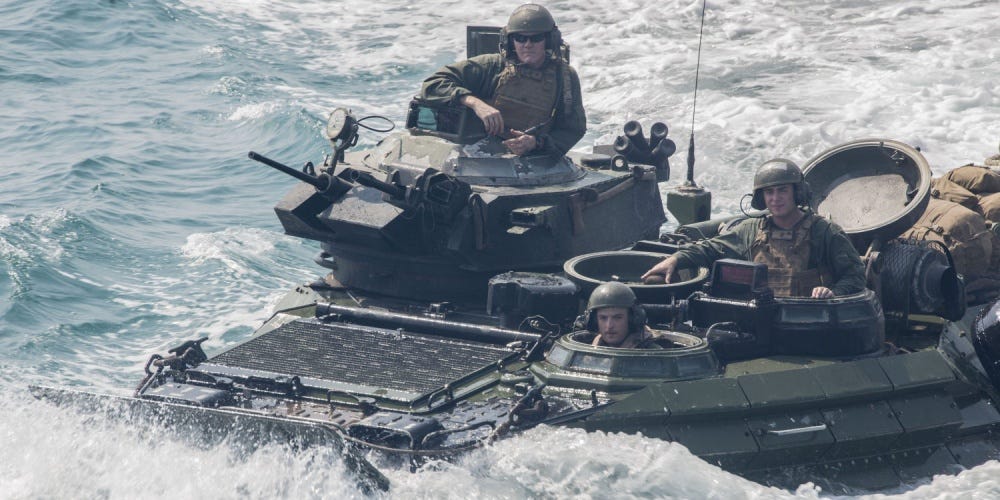 The U.S. Marine Corps Amphibious Assault Vehicle (AAV) accident last summer that killed nine service members was a disaster, one in which failure after failure led to a tragedy, an investigation revealed. recently published.

Many things went wrong. At one point, a few minutes before the vehicle sank, the troops on board were using their cell phones as flashlights to try to open one of the escape hatches because the emergency lighting system was not working. That was just one of many problems the investigation found.

An AAV is a fully tracked heavy amphibious landing vehicle commonly known as an “amtrac” or “track” that transports up to two dozen troops between ships at sea and on shore.

The crashed vehicle was carrying three AAV crew members, 12 Marines and one member of the Navy. Eight embarked Marines and the Navy sailor were killed, making this incident the deadliest AAV training accident in the vehicle’s history.

The Marine Corps subsequently grounded its entire AAV fleet while launching an investigation into exactly what happened. Water operations have not yet resumed.

The commander of the United States Marine Corps in the Pacific blamed the sinking and the resulting deaths on “a confluence of human and mechanical failures” in a statement accompanying the investigation. He added that “this tragic mishap was preventable.”

The command investigation found that the accident was caused by maintenance failures, delayed evacuation orders, and a failure to adequately train embarked personnel in AAV safety procedures, among other issues.

When the 26-ton amphibious vehicle returned to Somerset after a ground exercise on July 30, water was seeping into the AAV’s hull from multiple locations. All AAVs are leaking, but more water was leaking than normal due to various maintenance failures.

At around 5:30 pm local time, the rearguard crew member informed the vehicle commander that the water inside the AAV had reached the deck plate. The commander is said to have responded, “Thank you for letting me know.”

Standard operating procedure is for onboard personnel to prepare for operations on the water when the water hits the deck plate. Evacuation should begin when the water reaches the level of the ankles of the boots, but that did not happen and the results were fatal.

In addition to multiple leakage integrity failures, the vehicle also suffered several other serious mechanical failures, from the transmission to the generator, which impacted the four bilge pumps placed to expel water from the vehicle. The communications system was also affected.

When the water reached the level of the ankle of the boot, the commander of the vehicle began to wave the November flag, a blue and white banner indicating that a watercraft is in danger and needs immediate assistance, but no warrant was given to evacuation, according to research.

As for the embarked personnel traveling in the rear, the investigation said that “they were not properly trained and did not realize how serious the situation was … when the water was at the level of the ankles of the boots.”

Not only did they not receive a proper safety briefing before maritime operations, but the investigation also found that many of the embarked troops had not completed the necessary training to know how to exit the vehicle in an emergency.

The commander waved the blue and white distress flag for 20 minutes, but did not make use of the available pyrotechnic signaling options.

Due to a lack of communication, there were no safety boats or support AAVs in the water at the time of the accident, although two other AAVs eventually maneuvered to help.

At around 6:05 pm, the water in the AAV was calf level and the rear crewman was recommending evacuation to the commander of the vehicle. The order to open the starboard cargo hatch and begin evacuation did not come until the water hit the seats.

Troops in the rear moved to open the cargo hatch at the top, but things did not go well due to lack of training and decreased visibility. It was “extremely dark” inside the AAV.

The command investigation said that “the onboard personnel were using personal cell phones as a source of illumination due to the fact that the Emergency Exit Lighting System was not working and the fact that no chemical lights had been used to mark the hatch handles. “. The EELS had been inexplicably disabled.

By the time they opened the hatch and started pulling people out, the AAV was only six inches from the water, leaving it extremely vulnerable. To make matters worse, an assistance AAV collided with the wrecked vehicle and knocked it sideways.

As a wave washed over the struggling AAV, water poured through the open hatch, flooding the vehicle.

Some soldiers were standing on the benches that run through the interior of the vehicle when “the force of the incoming water knocked down all the personnel,” leaving the soldiers inside shocked and disoriented, according to the investigation.

Minutes later, around 6:15 p.m., the vehicle, which had been slowly sinking for about 45 minutes, tipped over and slid below the surface, dropping to a depth of 385 feet.

The command investigation said all the deceased service members were wearing bulletproof vests. Some troops appear to have attempted to remove their equipment, but the lifeguard adversely affected those efforts.

For those who never made it to the surface, lifeguards were less effective at depth, especially given the excess weight carried by the troops.

The Marine Corps said in a statement Thursday that their loss continues to be felt throughout the service.

The commander of the I Marine Expeditionary Force said in a statement that “all this mishap could have been avoided and lives saved if the commander of the vehicle had followed [standard operating procedures] and ordered the embarked personnel to remove their equipment and evacuate the AAV mishap in a timely manner. “

But there were also problems at other levels. He noted that at the platoon level “discipline and combat effectiveness were seriously compromised.”

The Marine Corps has already eliminated the senior commanders of the 1st BLT Battalion, 4th Marine Corps and the 15th MEU. The commander of Bravo Company has also been fired. Unspecified disciplinary measures have also been recommended for some others in the chain of command.

In the wake of last summer’s fatal accident, the Corps adjusted inspection standards for its AAVs. It also halted all AAV maritime operations until the entire fleet of approximately 800 vehicles could be inspected. The investigation said that “most AAVs did not meet the new inspection criteria.”

The AAV that sank and killed eight Marines and a sailor was not the only vehicle to encounter problems during last summer’s training exercise.

Just over a dozen AAVs participated in the training. One had to stay on the boat because it was not working, another had to be picked up from San Clemente Island by an air cushion from the landing craft after it malfunctioned, and one lost the ability to maneuver and had to be towed back to the island.

An inspection of the participating vehicles after the accident found that most were in “poor condition.”

A Marine Corps veteran he previously spoke with about AAV issues said the vehicles “are deadly traps and need to be upgraded if not completely eradicated from the Marine Corps.”

Marine Corps officers insist that vehicles are safe as long as procedures are followed correctly.

The Corps is in the process of phasing out its AAVs and replacing them with the new Amphibious Combat Vehicle (ACV). The service is also making dozens of changes to the way it maintains and operates amphibious vehicles to ensure that nothing like what happened last summer happens again.