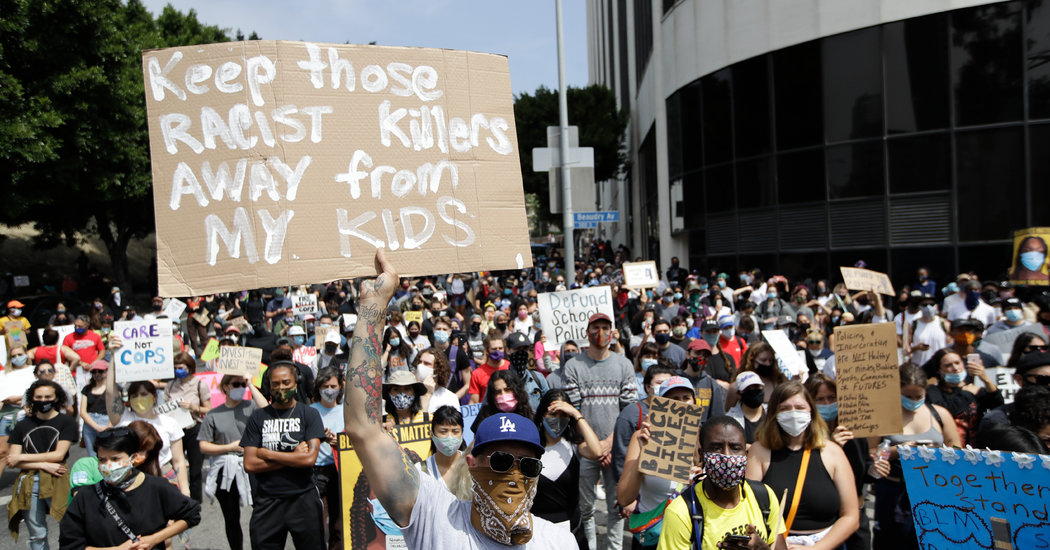 (This article is part of the California Today newsletter. sign up here for delivery to your inbox).

First, Thomas Fuller with an update on the virus.

Gov. Gavin Newsom said Monday that the state had stepped up crackdown on companies that ignored coronavirus-related restrictions, inspecting nearly 6,000 companies over the holiday weekend.

More than 50 companies were cited, the governor said. “The overwhelming majority of people were doing the right thing,” Newsom said.

With infections on the rise in the state, the governor last week reversed his reopening plan, shutting down indoor operations for many businesses in the hardest hit counties.

The number of counties on a growing state “watch list” of cases increased to 23 from 19 last week, the governor said Monday.

The tests increased to more than 100,000 per day, but the examinees’ overall positivity rate also increased by more than a third, reaching an average of 7.2% positive tests over the past week, according to state data.

Hospitalizations have increased 50 percent in California in the past two weeks, and hospitals are at capacity in some southern counties. But overall California is using only 8 percent of its hospital beds for coronavirus patients.

“We still have extensive hospital capacity in our system,” Newsom said.

The California Capitol building closed Monday as several people, including a lawmaker, were confirmed to have contracted the coronavirus. Autumn Burke, an assemblywoman representing Los Angeles, reported on Twitter that she tested positive for the virus on Saturday and had no symptoms. The decision to close the Capitol was made a day earlier, when Legislature leaders learned that two other people working in the building were confirmed to have the virus.

Katie Talbot, spokeswoman for Assembly Speaker Anthony Rendon, said the Capitol would be cleaned and disinfected during the shutdown. “Additionally, to help protect health and safety on Capitol Hill, the legislative recess has been extended until further notice,” he said.

Los Angeles Board of Education votes to cut police budget

Will Wright reports on a debate at the Los Angeles Board of Education.

Los Angeles Board of Education members who voted last week to cut 33 percent of the district’s police budget last week thought they had reached a compromise.

But not everyone agreed.

A day after the vote, the chief resigned after less than a year on the job, calling the $ 25 million cut “life-threatening” for students and staff members. George McKenna, the only black person on the seven-member board, said those who voted for her were more interested in appeasing activists’ calls than in protecting students.

“It is extreme and unnecessary,” said McKenna. “I have never seen anything so ill-conceived and carried out with such enthusiasm by elected officials.”

The budget amendment, which was approved in a 4-3 vote, will force the school district Police Department to fire about 65 of its approximately 330 sworn officers, according to a department spokesperson.

The new rules for police officers will also, at least temporarily, prevent them from patrolling campuses and wearing the traditional blue uniform.

Some Black Lives Matter activists said the cuts did not go far enough. But board members who voted for the policy changes say they are an important first step in reinventing the role of the police on school grounds.

“I am delighted to see us finally address institutional racism in how police departments were originally created,” said Jackie Goldberg, a board member who voted in favor of the changes. “It is time to have these discussions.”

According to the amendment, the $ 25 million will be redirected primarily to schools with the highest proportion of black students. The money will allow those schools to hire social workers, counselors, and security assistants who, in theory, can reduce the need for police officers by preventing violence before it occurs.

“This is a big problem and deserves a lot of thought, and one of the things it does to make people think big is to incentivize them,” Goldberg said. “Eliminating part of the budget is a great incentive.”

Sergeant Rudy Pérez, a spokesman for the school district Police Department, said the department would have to reduce its presence at sporting events, as well as the number of officers who specialize in mental health emergencies.

“That is a great success for us,” said Sergeant Perez.

Sergeant Perez said the department had already focused much of its resources on prevention while responding to serious threats to student safety. During the 2019-20 school year, officers responded to more than 115,000 calls, including 95 robberies, 466 assaults, and 155 mass shooting threats.

“It is not that we are fighting to get out and catch the bad guys,” said Sergeant Perez. “All we want to do is protect the children.”

Nick Melvoin, a board member who voted in favor of the amendment, said the district had “the best school police force in the nation,” but that the changes were necessary to address systemic racism within the district.

He also said that the Police Department, which accounts for about 0.8 percent of the school district’s roughly $ 8 billion budget, is a small piece of a very large puzzle.

“If the district wants to take seriously the dismantling of systemic racism and support for black lives, we must look at that other 99.2 percent,” said Melvoin. “The focus on the school police in particular is important, but it is insufficient.”

This is what we are following the most

We often link to sites that limit access for non-subscribers. We appreciate your reading of the Times coverage, but we also encourage you to support local news if you can.

California Today kicks off at 6:30 am Pacific time on weekdays. Tell us what you want to see: [email protected]. Did you get this email forwarded to you? Sign up for California Today here and read each edition online here.

California Today is edited by Julie Bloom, who grew up in Los Angeles and graduated from the University of California at Berkeley.