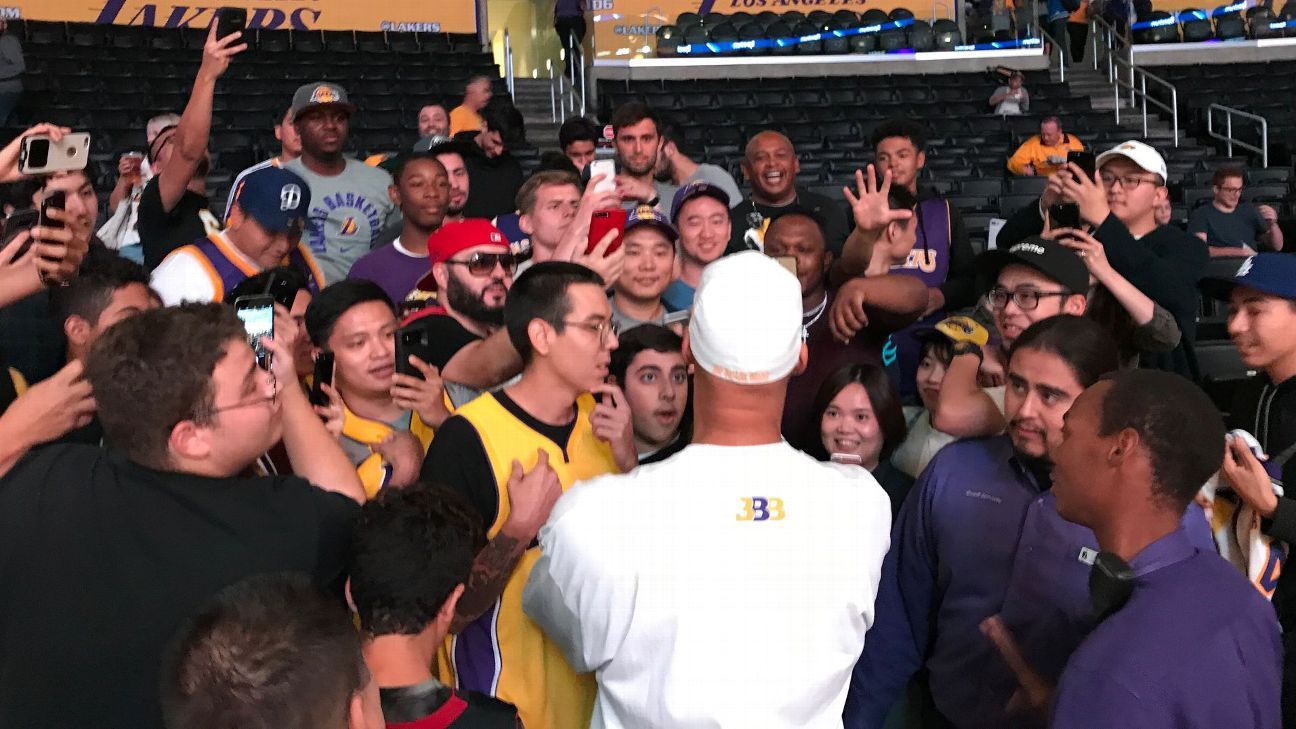 In what many employees at the Staples Center see as the "LaVar Ball Rule," this season the Los Angeles Lakers are applying "an existing policy" that no longer allows media members to congregate in a section of the arena between the family and players' badociates after the games.

Family, friends and agents wait for the players in the seats behind the basket closest to the visiting team's dressing room at the end of the games. Interviews conducted in that designated area and near the tunnel that leads to the sand corridors are now prohibited.

In previous years, the media socialized and, sometimes, interviewed individuals in that sector without interference. If a member of the media is recognized in that area now, Lakers staff members or sand security order that he or she leave the area.

"It's not a new policy, it's an existing policy," a team spokesperson told ESPN. "There has been more media presence in that area than before, that section is strictly for family and guests of players, it's a matter of privacy."

LaVar Ball, the father of Lakers rookie base Lonzo Ball, is also not allowed to do interviews on the court, something he did on opening night after the LA Clippers defeated to the Lakers 108-92. The rule of the league is that a person must have credentials to enter the court. LaVar Ball has not done an interview on the court since then.

A handful of rival office executives consider this issue a necessary reinforcement to prevent LaVar Ball from having a post-game routine platform where it occasionally becomes critical of the team.

In mid-November after a game, LaVar Ball told Bleacher Report that the Lakers' coaching staff should take a specific approach to training their son: be tougher on him.

Lakers head coach Luke Walton was forced to respond at the time: "I'll say this: I think he did it, a phenomenal job as a father with Lonzo because Lonzo is a special young man, he's selfless, selfless, his peers love him and cares for them and plays the game the right way, so he's done a great job with that, we do not care what parents think about how we're coaching the team, we're happy with the team and what is best for the team and how we can continue to improve. "

Wednesday after a loss by 127-123. In extra time to Golden State Warriors, in a post-match interview with ESPN, LaVar Ball said that Julius Randle should have pbaded the ball to his transitioning son for a possible winner of the game and questioned Walton's decision to call a timeout. .

"I'll tell you the crucial point, when Julius [Randle] got that ball in the end, he should have thrown it forward, Lonzo had an open tray, or 3 pointers, that's game, he would not have gone to overtime. a game … Julius tried to take too many dribbles, then committed a foul, or called it a waiting time, but if he had thrown the ball forward, the coach would not have asked for a timeout. Call him because the ball is in the air, Lonzo runs down the lane, the game ends … That's the best time to score.

"… But every time they score two triples, it's a racing game. Do not ask for waiting time, because that means you are afraid. You make two triples. in me, I have two more to come … Make the Big Baller move. Do not call without waiting times. "

Retired Forwards AC Green, a good friend of Magic Johnson, recently told TMZ he has no problem with what LaVar Ball said about Randle and Walton.

" I do not think he has any affiliation. with the Lakers … but he has an opinion, "Green said in the interview." And you still give him the opportunity to share his opinion, and they should … He will do what he does. "

Last week, apparently not related to LaVar Ball, the Lakers implemented a new protocol that prohibits media personnel, with the exception of those who make live TV shots, from sitting in the seats on the side of the court at the end of the track. the Lakers while the players are working before the game.