Look at team with Elliott as trade partner 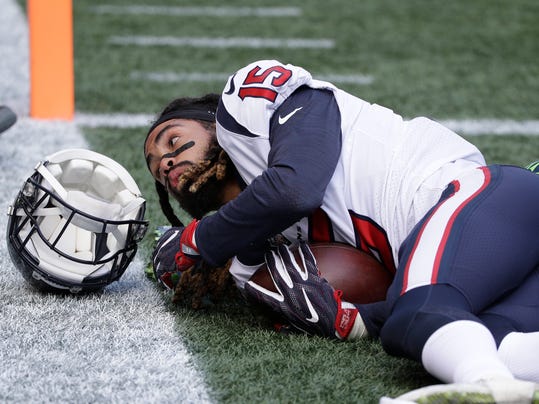 Houston Texans wide receiver Will Fuller loses his helmet after a reception for a touchdown against the Seattle Seahawks in the first half of an NFL football game, Sunday, Oct. 29, 2017, in Seattle. (AP Photo/Elaine Thompson)(Photo: The Associated Press)

Do you need Darren McFadden? Or Alfred Morris? Maybe you already have two or three stud running backs, and you’re lacking some wideouts.

Find out who is desperate, and start with the Ezekiel Elliott owner. If his six-game suspension does indeed stand, Elliott won’t return until Week 15. In most leagues, that’s the second week of fantasy football playoffs.

Unless you need the help to get into the playoffs, think twice about moving either McFadden or Morris. It’s likely to start out as a timeshare, despite Jerry Jones saying Morris will get the bulk of the work, and despite not playing yet this season, McFadden could be more productive over the six weeks. Rod Smith will likely be involved as well, and it’s probably a situation you should avoid. If you are likely headed for a playoff bye, think about trading for Elliott as a nice addition come playoff time.

JuJu Smith-Schuster was a hot topic last week, and he was one of the most added fantasy football players leading up to Week 8. He backed it up with by catching seven balls for 193 yards, including a 97-yard TD catch from Ben Roethlisberger. Martavis Bryant was a healthy scratch for his social media outburst, and Smith-Schuster took advantage. The Steelers are on bye this week before making a trip to Indy to face the leaky Colts. There’s no guarantee Bryant plays in that game, and even if he does, Smith-Schuster has earned more playing time. He had three touchdowns in three games with Bryant active. Have confidence in him for the rest of the season, but if you have a surplus of wideouts, you can sell on that 32 fantasy point performance. After all, 97 yards came on one play, and he is the third option on his team.

Now that Alshon Jeffery had a solid game, owners should see if they can deal him. He has Denver this week, followed by a bye, then some tougher matchups against the Rams, Giants, and Seahawks. Carson Wentz has more chemistry with Zach Ertz and Nelson Agholor, and that is unlikely to change. The Eagles added Jay Ajayi to the mix this week as well, so he could take away a couple more targets from Jeffery. As for Ajayi, this is a much better spot for him, and his owners should be pleased with that move.

Seven touchdowns on 13 catches for Will Fuller over four games is nuts. It’s unlikely to continue. That said, you have to love this offense and what Deshaun Watson is doing. You don’t have to sell high on Fuller, but you should certainly shop him around to see what you could get. Reach high, too. Try to get a borderline WR1.

The Atlanta Falcons have been a frustrating team to watch. That high powered offense from a year ago has taken a major step back. Julio Jones only has one touchdown, and Matt Ryan has not followed up his MVP season like many thought he would. How about Devonta Freeman? This guy has 12 or fewer carries in three straight games, one 100 yard rushing game, and has been held under 72 rushing yards for four straight games. Not to mention he’s expected to be limited all week in practice due to a stinger he suffered in his shoulder last week. Buy low as Freeman owners are probably panicking at the moment. View him as a solid RB1 for the rest of the season.

There are some concerns with Drew Brees, as the Saints are running the ball a bit more than in years past. For example, Brees led the league with 51 pbading attempts inside the 10 last season, and this year he’s tied for the 16th most with only 11 attempts, and on pace for only 25. Be confident he’ll turn it around, though, as he has a game this week against Tampa Bay, and he plays Atlanta twice, along with the Jets come playoff time. That’s three games inside a dome.

This column was provided to The Associated Press by the Fantasy Sports Network, https://FNTSY.com