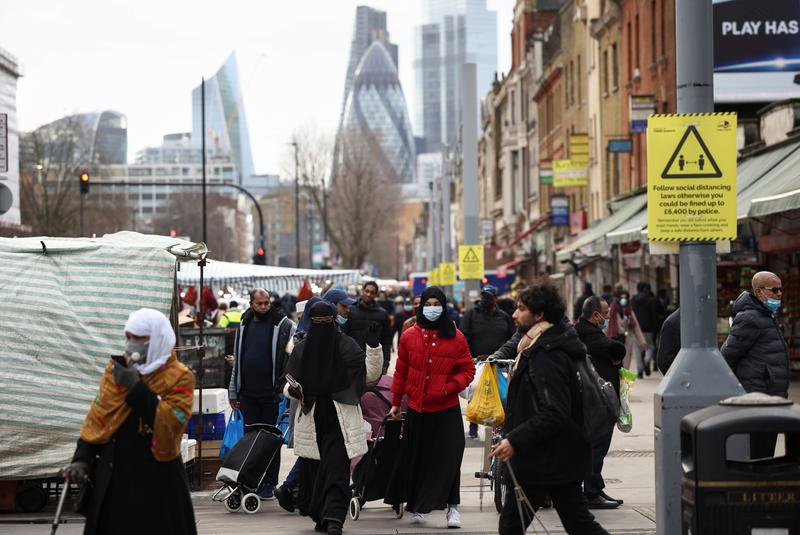 LONDON (Reuters) – Britain’s economy contracted less than feared in January when the country returned to a coronavirus lockdown, but trade with the European Union was affected by the entry into force of new post-Brexit rules.

Gross domestic product was 2.9% lower than in December, the Office for National Statistics said.

Economists polled by Reuters had expected a 4.9% contraction and government bond prices fell as investors took the data as a sign that the Bank of England was less likely to inject more stimulus into the economy.

Britain suffered its worst economic recession in three centuries last year when it fell by 10%. It has also been affected by the highest death toll from COVID-19 in Europe, with more than 125,000 people.

But the country is making progress with vaccines and, after Friday’s figures, economists said they expected the economy to contract 2% in the first quarter of 2021, half the impact predicted by the Bank of England for the month alone. last.

Many companies are learning how to deal with lockdowns, including retailers that have stepped up their online shopping operations and service companies that have tried to help workers do their work from home.

Samuel Tombs of Pantheon Macroeconomics predicted a 5% growth rebound in the second quarter “which would negate the chances that the Monetary Policy Committee will lower the bank rate this year.”

The BoE seems willing to put its stimulus programs on hold next Thursday.

Figures from the ONS also showed Britain’s exports and imports to the EU plummeting by the largest amount on record, although there was a delay in collecting some of the data and there were signs of a rebound towards the end of January.

Exports of goods to the EU, excluding non-monetary gold and other precious metals, plummeted 40.7%. Imports fell 28.8%.

Many companies advanced imports to avoid the disruption of the border as of January 1, and global trade flows have been affected by the coronavirus pandemic.

“The economy took a notable hit in January, albeit less than expected, with retail, restaurants, schools and hair salons affected by the latest shutdown,” said Jonathan Athow, a statistician at ONS.

Manufacturing fell for the first time since April with a sharp drop in car production.

But ING economist James Smith pointed to the boost to GDP from Britain’s COVID-19 health policy response: ‘What really stands out is health spending, where the rise of the government’s test-and-trace scheme and vaccine programs added 0.9% to GDP figures alone. “

The economy remained 9% smaller than in February last year, before the pandemic hit.

Prime Minister Boris Johnson plans to gradually ease the coronavirus restrictions in England before lifting most of them in late June.

Growth in the coming months is also likely to get a boost from Finance Minister Rishi Sunak’s announcement last week that he will inject another 65 billion pounds ($ 90.6 billion) into the economy, including an extension of his plan. of permits to protect employment.

The ONS said that the production of services contracted 3.5% in January compared to December. The Reuters poll had pointed to a 5.4% contraction.