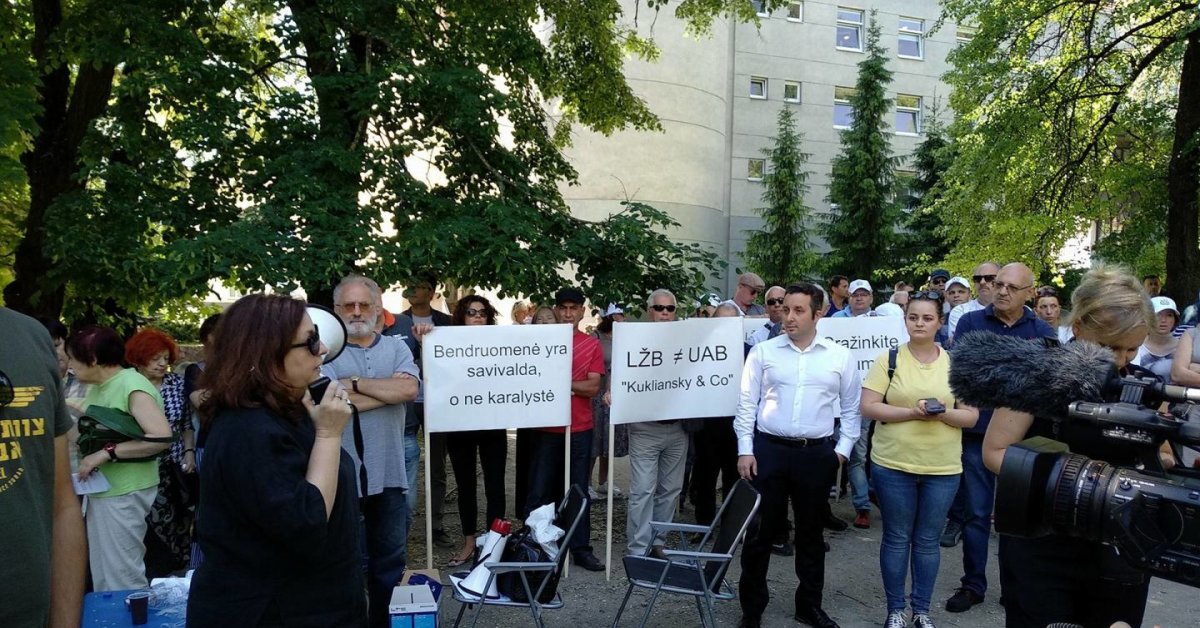 F.Kukliansky was elected President of the LSB in 2017. May The Vilnius City District Court ruled that it was re-elected illegally, because on the eve of the election, the number of votes in the Vilnius Jewish community was limited. The LJJ appealed to such a court judgment.

The decision of the Council of the Jewish Community of Lithuania adopted in April was passed, in order to hold all the regional Jewish communities in the presidential elections with one vote. Until then, the voting quota was divided according to the number of members of a particular community – for example, the organization uniting 500 members received five votes, 2 thousand. – 20 votes

The protest was also attended by about ten members of the LJP supporting F.Kukliansky, who said that F.Kukliansky supported most of the Lithuanian Jews, and the Vilnius Jewish community simply wanted to use the abundance of members to gain more power in solving important issues for Lithuanian Jews.

People from other cities of Lithuania came to the protest. The atmosphere was quite tense: both groups of protesters came forward with mutual accusations, but there was no change in physical activity. The protest was guarded by police and security officials.

During the protest, there were posters such as "Transparency – yes, waste – no," "Jews do not need a queen," "The community is a self-government, not a kingdom," the LJB is not UAB Kukliansky and co. "

Also he said he wanted the issues of leadership of the LJB to be dealt with outside the judicial path, and within the community itself.

"Unfortunately, our requests are not heard. Therefore, we will resolve public actions, because we do not see how otherwise it is possible to come to an agreement, "said S. Gurevičius.

According to him, the election procedure of the LJB chairman in 2017, The change was changed due to the small group of F.Kukliansky, who were willing to maintain the power of the community, and as a representative of the Vilnius Jewish representative, he was protected from the council of the LJB.

"Mrs. Kukliansky has concentrated on both the distribution of money and the political power in one hand. She is the key, but around her there are ten or fifteen people representing ten or fifteen people. Unfortunately, Lithuanian Jews are not in any way represented by the Jewish community of Lithuania. This is the essence of our protest ", – said S.Gurevičius.

F. Kukliansky supporters Representatives of the LjB held posters "Gurevich! Do not get it! Do not miss! Nevok! "," We are for the community "," Panevėžys už Fainą ir demokratija "and similar.

About 20 minutes after the protest began, Kukliansky himself appeared in protest. She said to journalists that criticism about the changed presidential election procedure was unfounded.

"Under the laws in force, all the members of the association have one vote. This is a clear and undisputed thing. Due to the fact that someone from the council proposed to comply with the law, I supported them. That's the whole change. And every lawyer who listens to me today is familiar with the Law on Associations, he really should not have any questions ", – said F.Kukliansky.

"We are well aware of the methods of Gaul, many times, the lie becomes true. (…) I assure you – the Lithuanian Jewish community will continue to work. And it does not matter that on TV they will show a cable with unverified facts that some creeps are crying that according to our data they did not receive any payments, although, according to our data, they received those payments. Maybe I'm all about this aggressive, someone else's stir up this little handful of people? Really not, "said F.Kukliansky.

Siauliai attacked a NATO officer: a young drunk, arrested for his mouth and struck a blade at his neck

In a crisis center in Siauliai, a small girl was hit

Pravieniškiai Mafia. The "Kaif" zone and the scandal that prisoners sought after the "Sea Festival"

I.Degutiene: I will not be more involved in the elections to the Seimas

Nevertheless, the "Sea Festival" in Pravieniškiai happened: prisoners were humiliated through it

In the new Akmenė there is an artificial roofing stadium

Powered by https://tech2.org/lithuania | Designed by TECH2
© Copyright 2021, All Rights Reserved