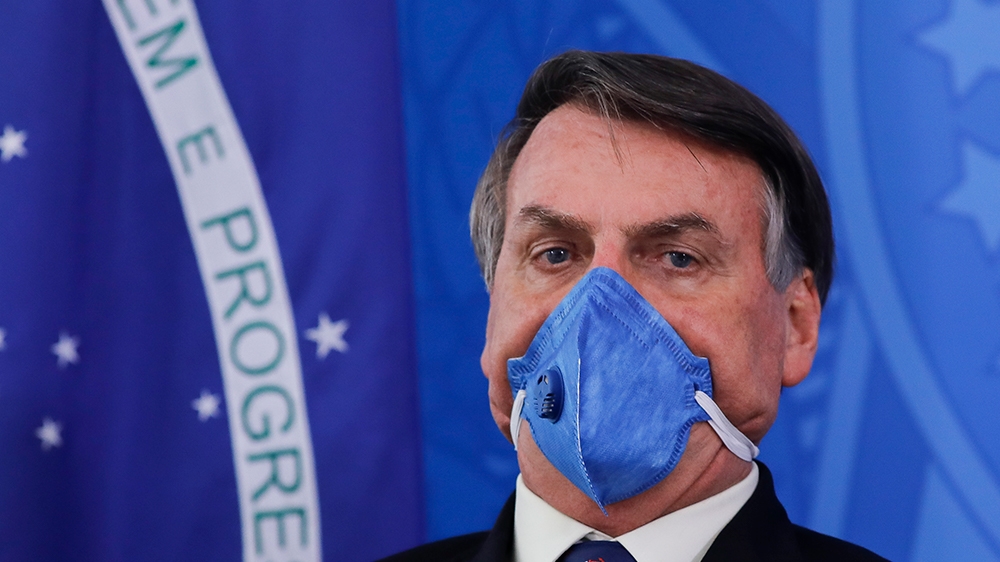 Brazilian President Jair Bolsonaro tested positive for COVID-19 on Tuesday after months of minimizing the severity of the virus.

Bolsonaro confirmed the test results while wearing a mask and speaking to journalists in the capital, Brasilia, and said he is already taking hydroxychloroquine, an antimalarial drug not proven to effectively treat COVID-19.

“I’m fine, normal. I even want to take a walk around here, but I can’t because of the medical recommendations,” Bolsonaro said. “I thought I had it before, given my very dynamic activity. I am president and I am on the front lines. I like being in the midst of people.”

The 65-year-old populist has often appeared in public to shake hands with supporters and mingle with crowds, sometimes without a mask. He has said that his history as an athlete would protect him from the virus, and that it would be no more than a “little flu” if he contracted it.

He also repeatedly said that there is no way to prevent 70 percent of the population from falling ill with COVID-19, and that measures by local authorities to ultimately shut down economic activity would cause more difficulties than allowing the virus to continue its course.

For almost two months, Brazil’s fight against the coronavirus has been in the hands of an interim health minister with no health experience before April.

He took office after his predecessor, a physician and health care consultant, resigned in protest of Bolsonaro’s support for hydroxychloroquine.

Bolsonaro is “the democratic leader who has most denied the severity of this pandemic,” said Mauricio Santoro, a professor of political science at Rio de Janeiro State University.

“Being infected is a blow to your credibility. It will be seen as another example of the failure of your response to the coronavirus.” Santoro said.

Political analyst Geraldo Zahran, speaking from Sao Paulo, told Al Jazeera that it was only a matter of time before the president contracted the disease due to his lack of social distance.

“It’s amazing that it took so long. In a way, he saw this coming. Since last night, he’s been asking people to stay away and keep their distance, so now he’s taking this a little more seriously.” Zahran said.

Bolsonaro compared the virus on Tuesday to a rain shower that will fall on most people, saying some, like the elderly, need to be more careful.

“You cannot talk about the consequences of the virus that you have to worry about. Life goes on. Brazil needs to produce. It is necessary to start the economy,” he said.

Cities and states last month began lifting restrictions that had been imposed to control the spread of the virus, as their statistical death curves began to decline along with the occupancy rate of their intensive care units.

Brazil, the sixth most populous nation in the world with more than 210 million people, is one of the global hot spots of the pandemic.

Bolsonaro said he canceled a trip to the northeast region scheduled for this week. He will continue to work by video conference and receive rare visits when he needs to sign a document, he said.

The president underwent an X-ray of his lungs on Monday after experiencing fever, muscle aches and discomfort, he told reporters.

As of Tuesday, his fever had decreased, he said, and attributed the improvement to hydroxychloroquine, which he has long promoted despite the growing medical consensus that it does not work against COVID-19. He turned away from the journalists and removed the mask at one point to show that he looks good.

Over the weekend, the Brazilian leader celebrated United States Independence Day with the nation’s ambassador to Brazil, then shared photos on social media that show him in close collaboration with the ambassador, several ministers, and aides. Neither wore a mask.

The US embassy said on Twitter on Monday that Ambassador Todd Chapman does not show any symptoms of COVID-19, but would be examined.

Bolsonaro tested negative three times in March after meeting with United States President Donald Trump in Florida. Multiple members of his delegation to the US later reported that they were infected with the virus.

So far, more than 65,000 Brazilians have died from COVID-19 and more than 1,500,000 have been infected. Both numbers are the second highest totals in the world, and are considered subcontracts due to a lack of widespread testing.

Bolsonaro has repeatedly visited the hospital since he took office, requiring multiple operations to repair his intestines after being stabbed in the 2018 election campaign.