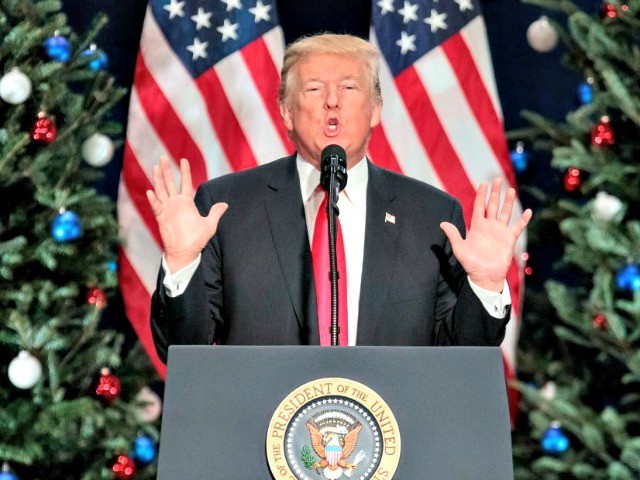 The Washington Post and other left-wing media are criticizing the words of President Donald Trump by lighting the national Christmas tree.

Trump fulfilled his campaign promise to keep the focus on the Christian message of Christmas.

The story of Christmas begins 2,000 years ago with a mother, a father, her little son and the most extraordinary gift of all: the gift of God's love for all mankind.

Whatever our beliefs, we know that the birth of Jesus Christ and the story of his life … pic.twitter.com/P94C3LjWlx

– Donald J. Trump (@realDonaldTrump) December 1, 2017 [19659006] "Melania and I are filled with joy at the beginning of this very blessed season," said Trump, "the celebration of the birth of our Lord and Savior, Jesus Christ."

Washington Post columnist Petula Dvorak, however, is protecting the legacy of former President Barack Obama, w hom writes that it was not a Grinch when it comes to wishing "Merry Christmas" and celebrating the day holy.

"He even signed an executive order to fire federal employees Christmas Eve" in 2012, defends Obama.

But they say it was President Trump who brought "Merry Christmas" to the White House. Or at least that's the story told by Fox News, a handful of conservative bloggers and the White House itself.

The opening of Christmas decorations by First Lady Melania Trump this week, including a strangely austere and sinister corridor of bare, shadowy branches that launched a thousand memes, was hailed as a kind of victory for tradition. As if the Obamas ended up with every bit of Christmas cheer for the past eight years and ate tofuki under a Festivus tree. In kente cloth.

The columnist notes a "delicious montage" of the Obama family saying "Merry Christmas" provided by MSNBC.

In 2016, the New York Post offered a review of the annual Christmas cards, and noted that he used the words, "Happy Holidays" or "Seasonal Greetings" without mentioning the Christian Christmas message .

" We wish you and your loved ones a joyful holiday and a wonderful new year, "said the card, which showed a picture of the Obama family in formal attire.

Dvorak states that conservatives have cheated" Whenever Trump "needed a quick applause", "Not to be confused with the narration of the" war against women ", the left comes out whenever Planned Parenthood is involved in another scandal.

" There is no war in Christmas, "says Dvorak, adding, however, that there is a war against Jews and Muslims," ​​driven by our commander-in-chief. "

It is interesting that as the Christian Christmas celebration approaches, Dvorak does not mention the genocide of Christians around the world under radical Islamic terrorists, and the rise of anti-Christian sentiment and secularization in the United States that reached its peak during the Obama era.

As Breitbart News reported or in January 2015, the year 2014 "saw more global persecution of Christians than any other year in recent history, and can only be compared to the first centuries when Christians were persecuted as criminals in the Roman Empire."

In March 2016 – when Christians in the Middle East were being terrorized and killed at the hands of Islamic State radicals: the Obama administration refused to call this Christian genocide.

"[T] the terrorist campaign waged by ISIS and its affiliates against C Hristians and other religious minorities meet the definition of genocide" in international law, said Carl Anderson, Supreme Knight of the Knights of Columbus.

] On the domestic front in 2012, Obama administration officials and the former president cut videos on behalf of Dan Savage and his "It Gets Better Project." Among other things, Savage was known to intimidate Christian teenagers at a national conference of journalism.

The HHS contraceptive mandate of the Obama administration forced Christian religious groups like the Little Sisters of the Poor – a group that ministers to the poor elderly – to spend years in court struggling to maintain the same religious freedom for to live their religious beliefs in the public square as they have always enjoyed under the Constitution – until Obama became president. [196] 59004] for Christians, Christmas is not about the "words" used in greetings, nor about the brightness and ties in packages and trees. Christians celebrate the birth of Jesus and what that event meant for the world.

"Americans have known Christmas as a time of prayer and adoration, of gratitude and goodwill, of peace and renewal," Trump said.

We are excited to think about people, across the nation and on all continents, whose spirits are lifted by the miracle of Christmas, "the president continued, adding that the birth of Jesus Christ" forever changed the course of human history. "

" There is hardly an aspect of our lives today that his life has not touched: art, music, culture, law and our respect for the sacred dignity of every person around the world, "he said. the president, 19659028] [ad_2]
Source link