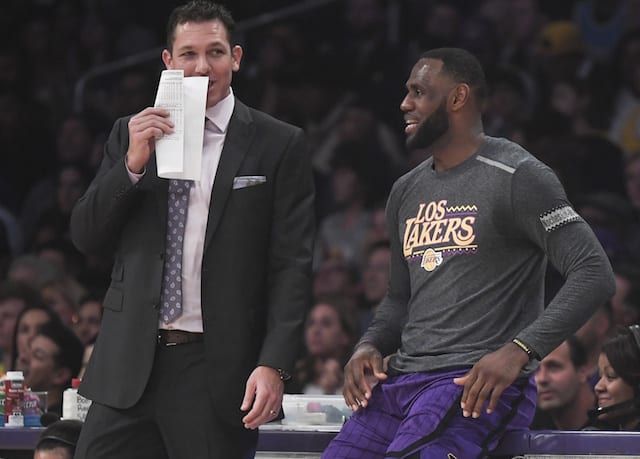 As the NBA's 2018-19 season comes to an end, all the attention has been on the future of head coach Luke Walton with the Los Angeles Lakers after his third season.

While Walton is not entirely responsible for the Lakers losing the playoffs, President Jeanie Buss praised him recently, but did not commit to his future.

With Buss surrendering basketball operations president Magic Johnson in all basketball decisions, there is already a list of potential candidates if they make a change.

One important factor is probably LeBron James, who was asked about how Walton has handled Year 1 in an exclusive interview with Allie Clifton of Spectrum SportsNet:

James also mentioned that the Lakers had a record of 15-8 when he and the young core played together and that simply was not enough for Walton to coach this team:

"It's not enough for Luke to know what he has consistently when you do not have a consistent list every night for a full season, so as you said, control what you can control, you have to play the hand you've dealt. He played the hand as best he could. "

Although Walton has his flaws, the construction of the list and the injuries completely derailed Year 1 with James and the young nucleus. Unfortunately for Walton, coaches are usually the scapegoats in this type of situation and it's no different for him.

If Walton finally does not remain the head coach, Jason Kidd, Mark Jackson, Tyronn Lue and Juwan Howard have all been mentioned. Out of this group, Lue won a championship in three consecutive appearances in the NBA Finals with James against the Golden State Warriors.