LeBron James focused on adapting to the team’s needs 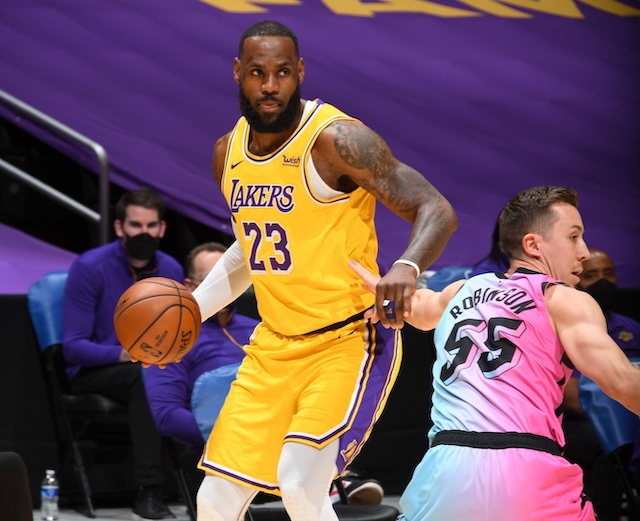 The Los Angeles Lakers have lost two games in a row without Anthony Davis and Dennis Schroder. While his defense remains strong, the offense has been looking for some life and LeBron James has felt the effects of that.

In his 18th season, James continues to show just how phenomenal as a basketball player he still is. Currently averaging 25.6 points, 8.2 rebounds and 7.9 assists while shooting 50.2% from the field and 36.2% from deep, he is once again in the league MVP conversation.

Yet as Davis and Schroder, two of the Lakers ‘best players, remain sidelined, James’ impact on the court couldn’t be more significant. Under the circumstances, what the 36-year-old star has produced in the last two games has been nothing short of spectacular.

Against Brooklyn, James had 32 points, eight rebounds and seven assists. Against Miami, his shot left him, but James found different avenues to hit, finishing with 19 points, nine rebounds and nine assists.

Despite the losses, James is focused on adapting to the Lakers’ needs, as injuries and health issues have pushed him to an even bigger role.

“Just keeping an open mind about what my teammates need, whatever the coaching staff needs, what the staff I’m playing with at that particular moment needs, and always with a growth mindset and not settling. “, He said.

“I think that’s what it comes down to and right now it’s another challenge for me to adapt.”

Without Davis’s gravity on offense requiring a lot of attention, opposing defenses are turning that attention to James to slow him down. But James is trying to find ways to beat the defense’s plan to extract victories.

“Not having AD for a long period of time is something we haven’t had for the last year and a half,” James said. “Now is the time to adjust again and see ways I can be even more effective in helping this team win games. That is the sport we are in. We are in the winners business and I have always been a winner. Time to click on that. ”

Lakers need more from the lineups without LeBron James

The onus has fallen on Los Angeles role players to increase their production to help James win games. However, as the last two games have indicated, they are not progressing as LA would like.

“‘Bron, he kicks the ball and obviously runs the show, so there’s a natural void,” Vogel said.

“It’s just one of those things that we have to keep in mind. Making sure we are organized and giving a plan to the guys that are there. Because like I said, we have a lot of firepower to win those minutes. Especially on the defensive side of the ball ”.

Have you subscribed to our YouTube channel? It’s the best way to watch player interviews, exclusive event coverage, participate in live shows, and more!