Kerryon Johnson, of Auburn, “beaten” but “sure” that he will play in the SEC championship game 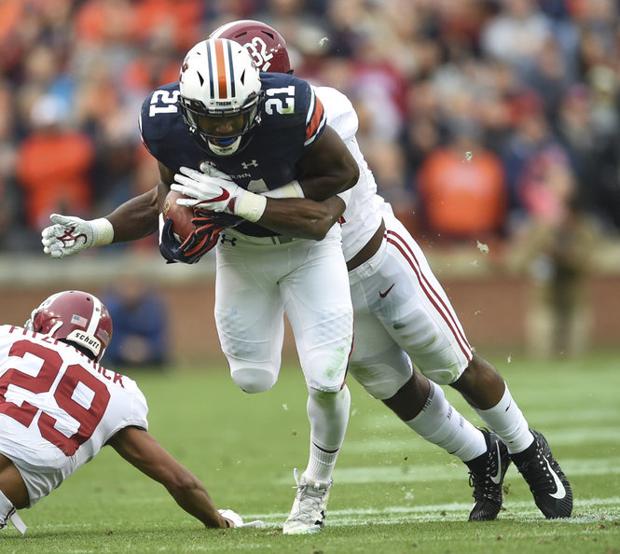 Kerryon Johnson described his shoulder as "beaten" and "aching", but Auburn's star performance is "sure" that he will be able to play in the SEC Championship Game.

The runner is rehabilitating from the right shoulder injury he sustained during Auburn's 26-14 victory over Alabama.

"I'm working this week to get back to being as healthy as I can," Johnson said. "We have worked in this game for a long time, I am doing everything I can to return to the field … I have confidence in myself only because I have suffered injuries in my time, here I have gone before, everyone has done it. until I'm officially finished "

Johnson did not practice on Sunday as No. 4 Auburn opened the week before playing at No. 6 Georgia in the SEC championship game at 3 p. CT Saturday at the Mercedes-Benz Stadium in Atlanta.

"This is the week (14) of the football season, I'm a runner and the guys are going to be beaten, it's nothing else, nothing less."

He had 30 carries for 104 yards and a touchdown, a three-yard touchdown pbad and three receptions for 21 yards before leaving the Iron Bowl midway through the fourth quarter.

"I made a mistake on my part, I approached with the wrong arm trying to get that touchdown, he just hit and hit, "Johnson said in his diving effort before his one-yard touchdown run in the third quarter against Alabama." Something like it did not feel so good in that (last) execution. I thought we had the game under control, so there's no need to try to push it. "

While playing on the field, the crowd at the Jordan-Hare stadium started singing" Kerry-on ", ] that the runner said he was excited.

"I was fine until that happened," Johnson said. "Just to see that support. Many people play this game; Game of people who come for Auburn, many people in that team that played on Saturday, but listen to the crowd singing my name, supporting me in that moment when I wanted to finish that game, obviously it was a great game for us. I wanted to be there and finish it with them, with the team.

"That made me cry in the eyes, it just shows that I've done well, I've done well in this university since I did it." I have been here. "

Johnson has 250 carries for 1,276 yards and 17 touchdowns this season and leads the country in both carries and rushing yards against clbadified teams despite missing more than two games due to a hamstring injury he suffered during the first game of the season …

He had 32 carries for 167 yards and two receptions for 66 yards and a touchdown in Auburn's 40-17 victory over Georgia earlier this month.

James Crepea is a beat journalist from Auburn for the Alabama Media Group Follow him on Twitter @JamesCrepea .