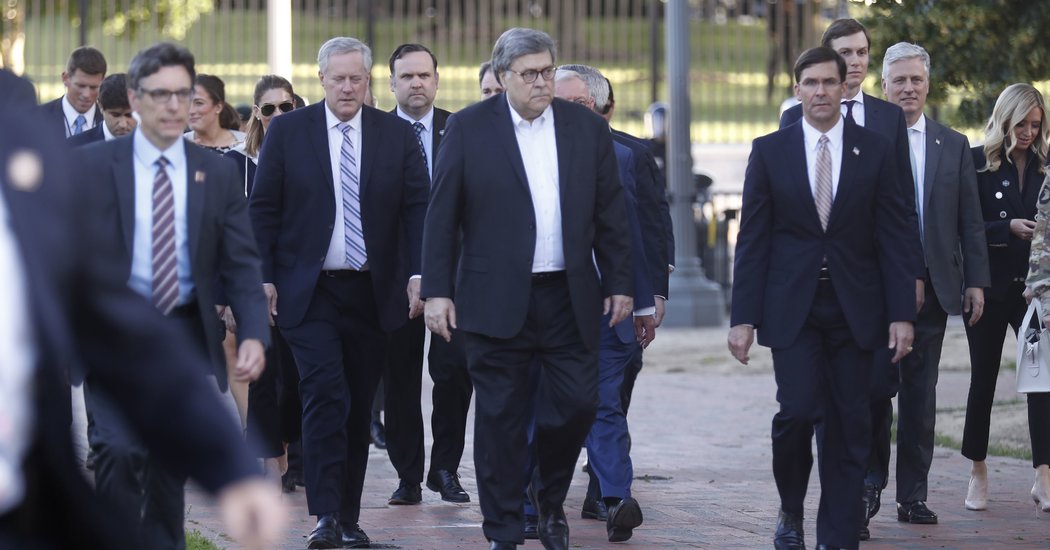 WASHINGTON – Attorney General William P. Barr said Friday that he had created a task force to investigate anti-government extremists on the far right and left who used nationwide police protests as cover to attack law enforcement officers and destroy property. , according to a judge Memorandum of the department.

Mr. Barr said that violent extremists have undermined public order and have tried to “become a law in themselves” through violence, and that some may be supported by “foreign entities seeking to wreak havoc and disorder”. He cited no evidence.

“In the midst of peaceful protests protected by the First Amendment, we have seen anti-government extremists involved in indefensible acts of violence,” Barr said, noting the attacks on police officers and other government officials, the destruction of public and private property and the threats. to passersby.

“The ultimate goal of the task force will be to not only allow the prosecution of extremists involved in the violence, but to understand these groups well enough that we can stop such violence before it occurs and ultimately eliminate it as a threat to public security”. Mr. Barr said.

Law enforcement officials have said that ideological adherents and anarchists have promoted riots during the nation’s peaceful protests. Barr mentioned two groups in his memorandum: boogaloo, an extreme right-wing movement seeking to provoke a second civil war to overthrow the United States government, and antifa, a loosely organized far-left ideology whose supporters generally seek to fight groups they consider fascists. and racist.

“Although these extremists profess a variety of ideologies, they are united in their opposition to the basic constitutional values ​​of a democratic society governed by law,” Barr said. “In fact, they are forces of anarchy, destruction and coercion.”

Shortly after the murder of George Floyd, a black man in Minneapolis who died while in police custody, protests against police violence were held in cities across the country, and in some places people took advantage of the riots to loot and riot.

Barr and the department were criticized for only naming Antifa when they initially blamed extremists for some of the violence surrounding the protests. In the weeks that followed, federal prosecutors cited affiliations with boogaloo in filing charges for protest-related crimes, but did not charge the defendants with being affiliated with antifa.

Barr said in an interview Thursday with NPR that arrests of people with antifa connections had been made but prosecutors had not cited those connections in individual cases.

He said the department was obtaining more information on those suspects.

Carpenito was Mr. Barr’s first election to be the United States Acting Prosecutor in Manhattan, after he initially asked the head of that office, Geoffrey S. Berman, to resign last week. Mr. Barr was forced to change course after Mr. Berman refused to resign, and in the end, he replaced Mr. Berman with his chief delegate, Audrey Strauss, on a performance basis.

The task force will treat anti-government groups in the same way it does with organized criminal or terrorist networks, Barr said, “disrupting their violent activities and ultimately dismantling their ability to threaten the rule of law.”

Investigators will collect information on extremists from federal prosecutors, the FBI, and other parts of the Justice Department and share it with other federal, state, and local law enforcement offices.