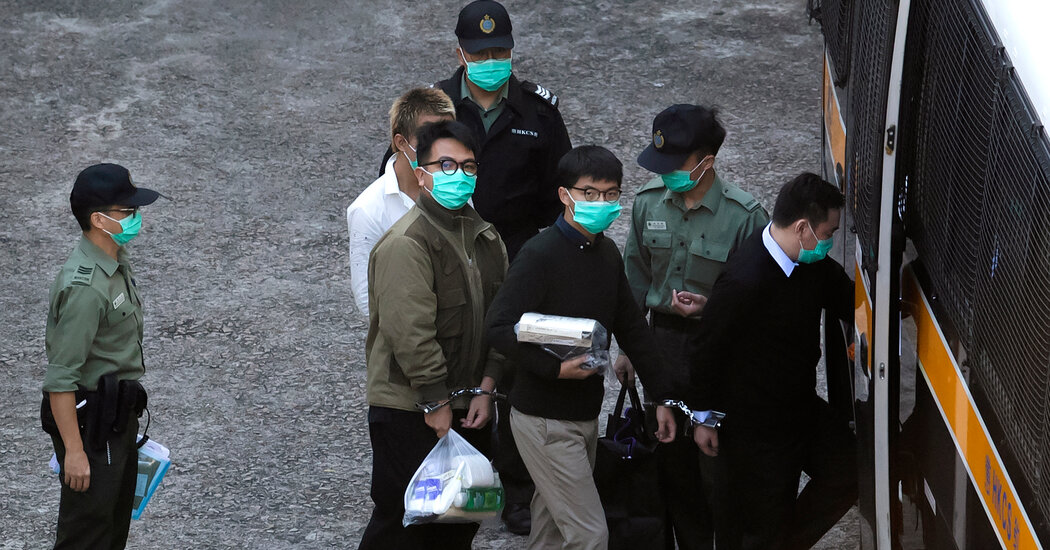 HONG KONG – Joshua Wong, a prominent pro-democracy figure, was sentenced to 13 and a half months in prison, while fellow activist Agnes Chow received 10 months on a protest in Hong Kong last year, the latest setback for political opposition Was. Chinese city.

Ivan Lam, the third member of his disbanded political group Democisto, was sentenced to seven months. While awaiting sentencing, the trio were imprisoned last week after being convicted for unauthorized assembly charges on a June 2019 demonstration when thousands gathered outside police headquarters in the early days of the mass protest movement and the city surrounded. He faced up to three years in prison.

Democisto dissolved shortly after China imposed a far-reaching national security law on Hong Kong this summer. Authorities have since taken increasingly aggressive action on dissent, arresting activists, journalists and politicians. Four MPs were removed from the post last month, indicating the mass resignation of the pro-democracy camp from the local legislature.

In 2014, Mr Wong, in 2014, became a galvanizing force to rally huge protests at the borders of direct elections, known as the Umbrella Movement. The 23-year-old Ms. Chow, known as the “Mulan” of the Hong Kong democracy movement, has a wide following in Japan for her Japanese language skills.

Mr. Lam, 26, founded Activist Group Scholarism in 2011 with Mr. Wong. The group, which Ms. Chow joined a year later, led protests against plans to introduce a national education curriculum in Hong Kong schools, which she deemed “brainwashing.” Mr. Lam was later imprisoned for breaking into the legislature during a 2014 protest against a development plan.

After being jailed last week, Mr. Wong spent three days in solitary confinement because a scan suggested that he might have consumed a foreign item before being detained. During that period, he had difficulty sleeping as his cell lights were left on 24 hours a day, and former MP Fernando Cheung, who met with Mr. Wong on Saturday, said he was sent for regular medical checkups. No foreign objects were found, Mr. Cheung said.

Mr Wong was sentenced to three months in prison in November 2014 for contempt at contempt camp against a court order. He was released on bail after a six-day appeal, then completed a two-month term. Punishment in May 2019.

He also served 69 days of a six-month sentence on illegal assembly charges and was sentenced by the Hong Kong Court of Final Appeals in 2018.

Ms Chow, who had not been incarcerated previously, said she was not adjusting well to custody conditions and was unable to sleep at night, according to a message to friends who had come to her in prison and Posted on his Facebook account on Sunday. .

“I understand that I will be sentenced to prison on Wednesday, so my morale is low, and I am very worried,” he had said.

Ms. Chow was arrested earlier this year on charges of separatism on suspicion of violating the new national security law. But he was not charged in that case.

Mr Cheung said that Mr Wong had received one positive thing about his return to custody: he no longer faced persistent questions about what lay ahead for Hong Kong’s besieged democracy movement.

“He doesn’t have to deal with that for now,” Mr. Cheung said. “People understand that he is unable to do much in prison. The burden is now on the outsiders.”