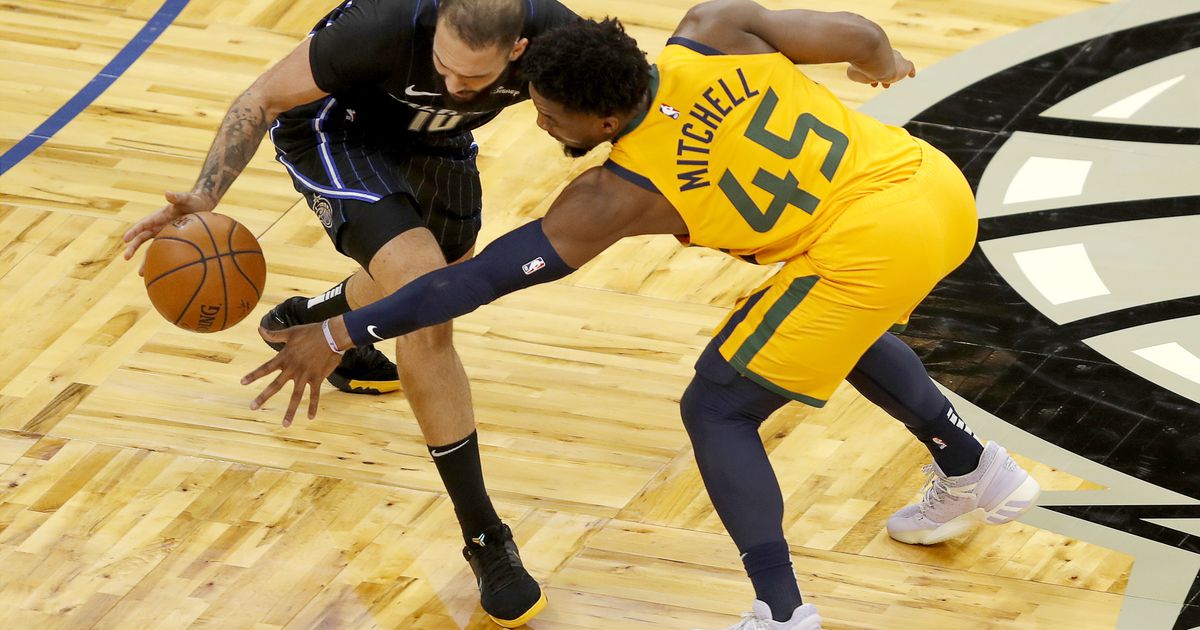 Utah continues to thrive by sharing playmaking duties and playing without a traditional point guard.

Editor’s Note: This story is available to Tribune subscribers only. Thank you for supporting local journalism.

1. Donovan Mitchell’s play in the second half

For the fourth year in a row, Donovan Mitchell is scoring more in the second half than in the first.

Interestingly, this year, he’s doing it despite having fewer minutes and fewer shots in the second half than in the first half, no doubt that’s because the Jazz have been part of so many blowouts this year.

Mitchell explained it quite simply: It takes him a little time to figure out what the defense is doing and to know how to beat it.

“I think the most important thing is to find out how they are protecting me. You know, I had a few lapses in the first half, two bad shots, and then it was like saying, ‘Okay, this is what I see,’ ”Mitchell said. “It wasn’t about make and lose, it was about what I was seeing in the coverage.”

Tonight, I think it took a little while for him to realize how much he could beat Evan Fournier one on one. Fournier is not known as a tenacious defender, which means Mitchell could part ways on screens like this.

Honestly, Fournier is pretty small too, which means Mitchell has a chance to use his size to get to the rim, especially if the Jazz are doing other distracting things that make defense support less focused.

As you know, generally the Jazz play with a spectacular defense style – the Jazz either make Rudy Gobert sink into the paint and try to induce the other team to take a lot of midrange stuff or, even more recklessly, attack Gobert in the edge.

But some players make you change your defense. While not a household name, Terrence Ross is certainly one of them: The Jazz lost a game to the Magic two seasons ago just because Ross had tremendous scoring success in the fourth quarter.

So the Jazz had Gobert play high on pick and rolls, while the Jazz sank too far from one of the Magic’s perimeter shooters so that Nikola Vucevic couldn’t free himself from underneath. Take a look at where Gobert and Mitchell are in this play:

Mitchell is 100% comfortable sinking into the paint in front of Chasson Randle, even though he is only one death away. And you see why once the pass is delivered: He’s not even considering throwing this ball. After all, he’s a 27% 3-point shooter this year.

This meant that Ross went just 4-16 from the court tonight; he’s the type of player who doesn’t let the fact that he’s not open stop him from shooting. And because of that, the Jazz won the game.

It’s a good dance that the Jazz can get away with because the Magic are a very poor shooting team. Tonight, the Jazz gave them some opens, and they probably still made more than expectations. However, the Magic only took 34 3s, not enough for the Jazz to really pay.

He’s a good defense and a good Jazz scout, and a poor roster build for Orlando.

Mike Conley didn’t play tonight due to hamstring management; essentially, they’re going to be very careful with him in back-to-back games, just like last year. That meant Donovan Mitchell was once again the Jazz’s starting point guard, with Joe Ingles typically playing as backup assistant.

You know, it reminds me of something Dennis Lindsey said in the early years of his tenure as general manager. I can’t find the quote from years ago, but he said he felt this market (Utah) demanded a traditional point guard due to the success of John Stockton and Deron Williams, even though the league was moving away from that archetype a bit. a bit.

The result was, honestly, a rotating cavalcade of owners who were very disappointing. Trey Burke and Dante Exum were the two biggest, but even on the depth chart, guys like Jamaal Tinsley and John Lucas III weren’t exactly the bright spots.

“I think there has been an evolution in the game. Some of this has to do with the floor space and the way people are playing, “said Quin Snyder. “There’s not that kind of mid-court basketball where, you know, you have a quarterback, so to speak.”

For a time there, certainly under Ty Corbin but also initially under Snyder, the Jazz played an anachronistic style of basketball. The Favors / Gobert lineups remained stagnant, and it wasn’t until last year that the Jazz got a bit modernized.

Of course, they’re now at the forefront of the league stylistically, and part of that is playing pretty positionless basketball – I don’t know or care who’s playing point guard, or shooting guard, or forward, or power forward, at any time. . There is a center, and then there are the perimeter players who can do it all. Versatility is powerful.