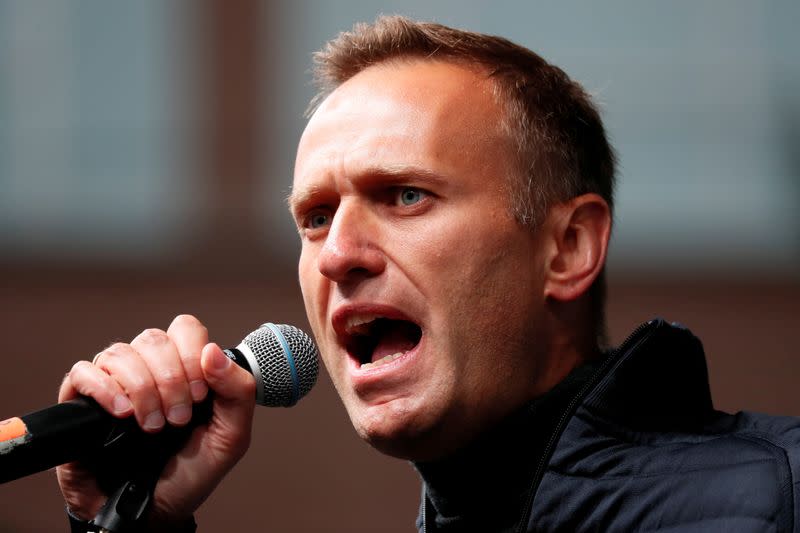 By Tom Balmforth and Anton Zverev

MOSCOW (Reuters) – Jailed Kremlin critic Alexei Navalny was taken to a sick room with symptoms of a respiratory illness and tested for the coronavirus, the Izvestia newspaper reported on Monday, after saying he had a high fever and cough. .

Navalny, a prominent critic of President Vladimir Putin who declared a hunger strike last week and accused prison staff of denying him adequate treatment for acute back and leg pain, previously alleged that there was an outbreak of tuberculosis in his ward. .

The 44-year-old politician whose release the West has demanded said three people in his neighborhood had been hospitalized with tuberculosis and joked darkly that contracting the disease could offer him relief from his other ailments.

“If I have tuberculosis, maybe it will help me get rid of back pain and leg numbness. It would be nice,” he wrote on Instagram.

He said prison authorities had measured his temperature at 38.1 degrees Celsius (100.6 degrees Fahrenheit). He also said he had a bad cough.

Hours later, Izvestia, a pro-Kremlin newspaper, cited a statement from the federal prison service saying he had been transferred to an infirmary and had various tests done, including for the coronavirus.

Izvestia’s report did not say where the sick room was, but one of his lawyers said it appeared to be within the IK-2 corrective penal colony 100 km (60 miles) east of Moscow, where he was being held, the outlet reported. TV Rain. .

Navalny has accused prison authorities of depriving him of sleep by waking him every hour at night and refusing to provide him with adequate medical care.

Prison authorities deny sleep deprivation and have previously said that Navalny’s condition was satisfactory and that all necessary treatment has been provided. The prison that held him did not immediately respond to a request for comment on Monday.

His allies said late last week that they would stage an ongoing protest outside his prison starting Tuesday unless he was examined by a doctor of their choice and given what they consider the proper medicine.

“There is a real prospect that #Rusia is subjecting him to a slow death. He must have immediate access to a doctor he trusts and must be released,” he wrote on Twitter.

State media and some members of a prison watchdog group have accused Navalny of faking his medical problems to keep himself in the public eye, which Navalny and his allies deny.