ISRO’s Chandrayaan-1 shows that the Moon’s war; Scientists point to possible cause in Earth’s atmosphere 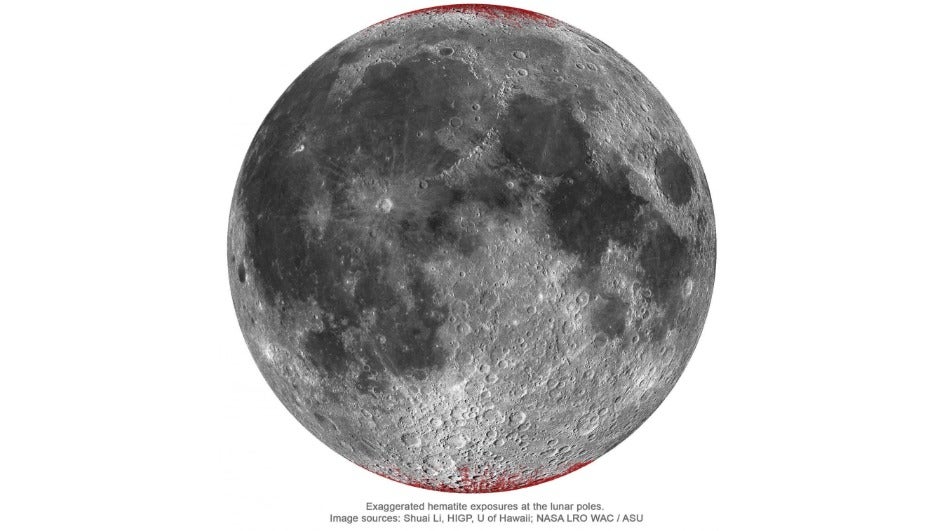 Data from the Indian Space Research Organization (ISRO) has revealed that the Earth’s natural satellite Moon may be rusting. New research suggests that the moon is turning slightly red, indicating the formation of a red-black mineral form of iron called hematite on the surface, especially at the poles.

The formation of rust or iron oxide can be attributed to the presence of two major elements – water and oxygen – when they are exposed to iron. The lunar surface is filled with iron-rich rocks, which together with the other two elements can facilitate this chemical reaction. However, the moon has no rich source of water and is devoid of oxygen in its atmosphere.

“It’s very surprising,” said Shuai Li of the University of Hawaii, the study’s lead author. “The moon is a terrible environment to form in hematite.” So, what started such a chemical reaction on the Moon? Scientists say that the main reason behind this change could be the Earth’s atmosphere.

Researchers observed the phenomenon on the moon while examining data from the Moon Mineralogy Mapper (M3) instrument on ISRO’s Chandrayaan-1 spacecraft. The data obtained from M3 showed that the moon had a different composition than the pole surface.

This requires oxidizer to convert iron into rust, which can steal electrons from iron and thus initiate rust formation. To understand the reason, the team investigated the bombing of hydrogen from the solar wind. However, it had the opposite effect because hydrogen is a reducer – which donates electrons instead of taking it. Therefore, solar winds cannot cause corrosion on the lunar surface.

The airless moon may lack an atmosphere to support the formation of oxygen, but it hosts traces of oxygen that travel from Earth to reach the lunar atmosphere. Therefore, the researchers say that Earth’s magnetotail – a long region of the planet’s magnetosphere – plays an important role in this change observed on the Moon.

In 2007, the Kugya Orbiter of Japan helped scientists discover that oxygen from Earth’s upper atmosphere could pass through the magnetotail to the Moon, which is 3,85,00 kilometers from Earth. Therefore, terrestrial oxygen can reach near the moon in front of the Earth and this discovery means that oxygen from the Earth can induce the formation of hematite on the lunar surface.

Furthermore, the magnetotail interferes with hydrogen molecules released from the solar air to reach the Moon’s atmosphere, which if reached could prevent the formation of this corrosion. According to a NASA statement, the magnetotel blocks about 99% of solar winds during certain phases of the lunar orbit – particularly in the full moon phase.

According to NASA, the Moon has been slowly moving away from Earth for billions of years and moving an inch nearly every year. “Therefore, it is also possible that more oxygen fell into this rift when the two were closer in ancient times,” the statement said.

Missing clues: the presence of water on the moon

Until now, scientists were able to decode the presence of oxygen, iron for the formation of rust. But the single most important element to carry out this reaction was still missing i.e. water.

This is where the data of Chandrayaan 1 came back into circulation. The researchers used data obtained by the Indian Space Agency’s maiden moon mission – which remained in operation until August 28, 2009. The mission is credited for the discovery of water ice on the lunar poles as well as the creation of a wide variety of minerals. lunar surface.

The researchers studied the data obtained from the Moon Mineralogy Mapper Instrument onboard spacecraft in detail. The presence of water has been detected only at the poles of the lunar surface in the form of frozen water, which remains almost entirely in shadow.

However, this research focused on water found in the lunar surface rather than just found at the poles because hematite was discovered far away from this frozen ice. Answering this esoteric question, scientists propose that high-speed dust particles can initiate the release of water molecules originating on the surface, thus allowing water to mix with iron.

“These effects can increase heat oxidation rates; Dust particles themselves can also carry water molecules, they can be implanted into the surface so that they combine with iron. During just the right moments — that is, when the moon is shielded from solar wind and oxygen is present — a corrosion-inducing reaction can occur. “Explains NASA’s statement.

The study was published in the journal Science advance This week can be accessed here. The team of researchers behind the study included scientists from the California Institute of Technology, the University of California at Berkeley, and other prestigious institutions in the United States.