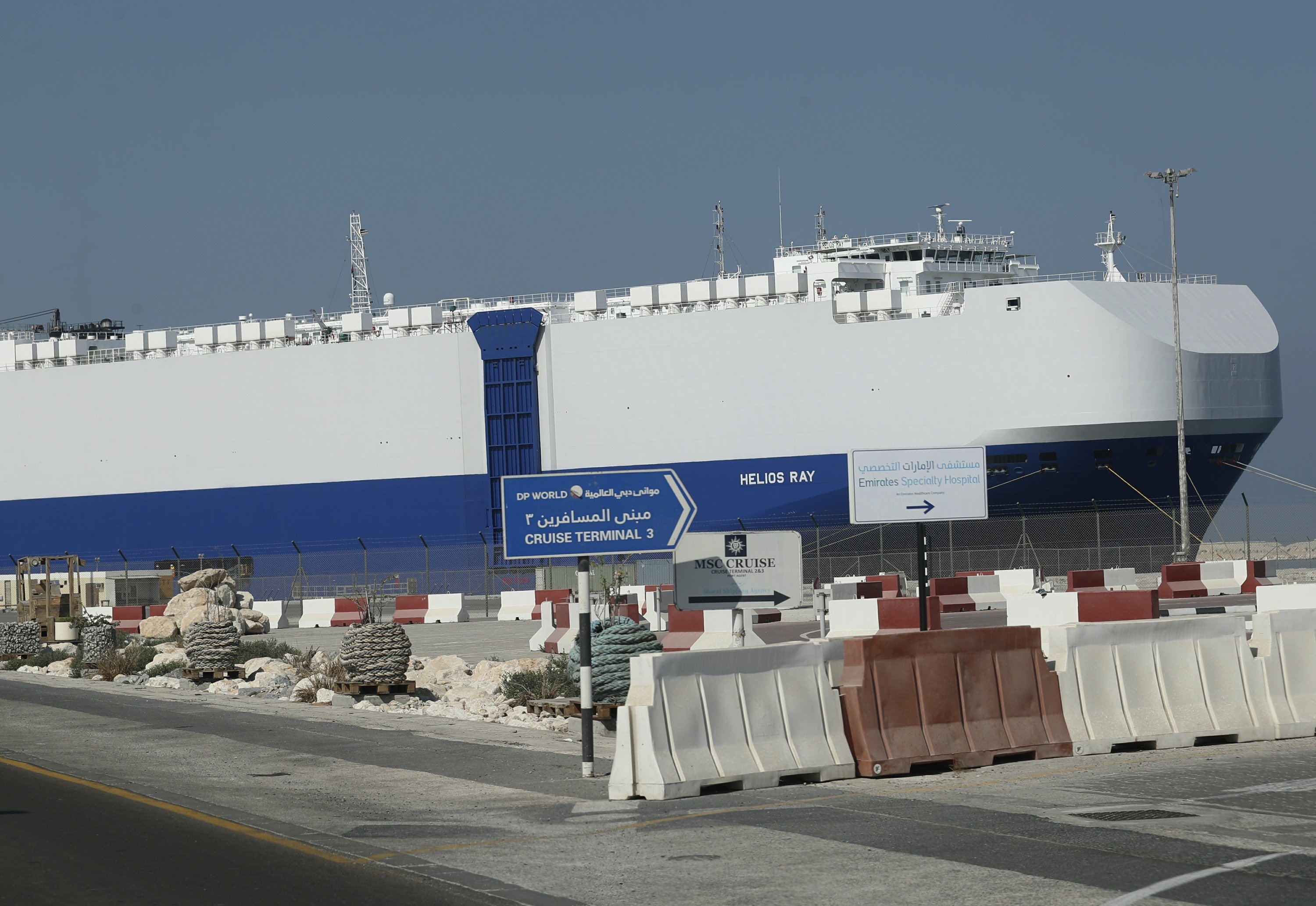 DUBAI, United Arab Emirates (AP) – An Israeli-owned cargo ship that suffered a mysterious explosion in the Gulf of Oman arrived at the port of Dubai for repairs on Sunday, days after the blast that rekindled security concerns in the Gulf of Oman. Middle Eastern waterways amid increased tension with Iran.

Associated Press journalists saw the massive Israeli-owned MV Helios Ray sitting in the dry dock facility at Dubai’s Rashid Port. Although the crew came out unscathed from the blast, the ship suffered two holes on the port side and two on the starboard side, just above the waterline, according to US defense officials.

It is unclear what caused the explosion, but the incident comes amid heightened tension between the United States and Iran over the collapse of the 2015 nuclear deal. Iran has tried to pressure the administration of President Joe Biden to grant relief. of the sanctions it received under the agreement with the world powers that former President Donald Trump abandoned.

From shore, AP journalists could not immediately see the damage to the ship. The dock blocked the view from the starboard side of the ship to the waterline and the port side could only be seen from a distance. The ship was anchored near Dubai’s historic floating hotel, the Queen Elizabeth 2. An Emirati coast guard ship was seen sailing behind the ship, with Dubai police and Emirati armed forces vehicles stationed nearby.

Emirati officials did not immediately respond to requests for comment about the ship’s docking in the country.

Friday’s explosion on the ship, a Bahamian-flagged cargo and unload vehicle cargo vessel, was reminiscent of a series of attacks on foreign tankers in 2019 that the U.S. Navy blamed on Iran. Tehran denied any involvement in the alleged attacks, which occurred near the Strait of Hormuz, a key oil choke point.

Israeli ambassador to the United States and the UN, Gilad Erdan, told Israel Army Radio on Sunday that “it is no secret that the Iranians are trying to damage Israeli targets,” claiming that the explosion on the ship had the seal from previous Iranian attacks.

Meanwhile, on Sunday, Yemen’s Iran-backed Houthi rebels claimed responsibility for firing a ballistic missile and nine bomb-laden drones. at “sensitive sites” in the Saudi Arabian capital, Riyadh, the night before. The group’s military spokesman, Yahia Sarei, added that six other explosive drones attacked “military positions” in the southwestern cities of Abha and Khamis Mushait. The Saudi interception of the missile unleashed an apparent explosion over Riyadh that scared residents and scattered debris from the howitzers, causing no casualties.

The Helios Ray had unloaded cars at various ports in the Persian Gulf before leaving the Middle East for Singapore. The explosion occurred as the ship was sailing from the Saudi port Dammam in the Gulf of Oman, forcing it to head to Dubai, in the United Arab Emirates, for inspection.

Iranian authorities have not publicly commented on the ship. The country’s hardline daily Kayhan, whose editor-in-chief was appointed by Supreme Leader Ayatollah Ali Khamenei, alleged that Helios Ray was “possibly” on a “spy” mission in the region, without offering any evidence that support the claim. Sunday’s report speculated that the ship may have been “caught in an ambush by a branch of the resistance axis,” referring to Iranian representatives in the region.

Iran has also blamed Israel for a recent series of attacks, including a mysterious explosion last summer. that destroyed an advanced centrifuge assembly plant at its Natanz nuclear facility and the assassination of Mohsen Fakhrizadeh, a prominent Iranian scientist who founded the Islamic Republic’s military nuclear program two decades ago.

Iran’s repeated vows to avenge Fakhrizadeh’s assassination have raised alarms in Israel, particularly as the Gulf sees an increase in Israeli trafficking following the country’s normalization agreements with the United Arab Emirates and Bahrain.