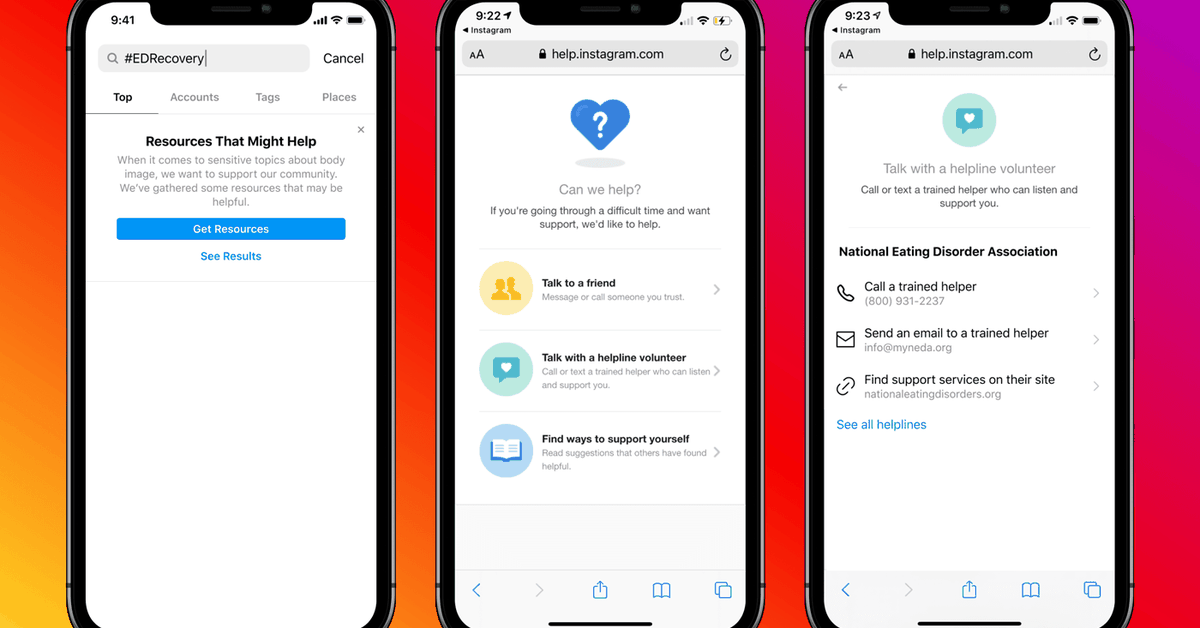 Instagram announces that it is adding resources for people affected by eating disorders to its social platform. If users search for hashtags or content that is potentially related to eating disorders, the company will direct them to resources or helplines provided by the National Eating Disorders Association (or NEDA) in the US, as well as others. in the UK, Australia, and Canada.

Instagram says that it currently tries to blur potentially triggering content in search results, directing people to widespread crisis support, but now it should direct users to resources designed specifically for eating disorders. On its blog, Instagram also says it plans to show the resources if someone is trying to share content related to the eating disorder or “if a friend is concerned about something they see posted and wants to offer support.”

This update is similar to what TikTok announced today. However, unlike TikTok, Instagram doesn’t appear to have flagged eating disorder-specific resources before, although they do show up in the general list of helplines. Currently, searching for content related to eating disorders will take you to that list of general helplines, which not only includes NEDA, but also the National Alliance on Mental Illness, the Veterans Crisis Line, and the Trevor Project.

However, the Instagram screenshots imply that the support button will specifically point NEDA contacts to people, rather than just showing them the full list of available help lines.

As part of its National Eating Disorder Awareness Week programming, the company also says it plans to work with community leaders to publish Reels that “promote positive body image, reject weight stigma and harmful stereotypes, and show that all bodies are worthy and worthy to be celebrated. ” According to the publication, this is the third time that Instagram has worked on content for the NEDA week.

Instagram has had trouble in the past trying to regulate eating disorder content, and the social network is often mentioned in conversations about body image and negative perception, especially among young people. While the higher resource prioritization probably won’t help much with self-esteem issues after using the site, it should help struggling and vulnerable people gain easier access to expert help.