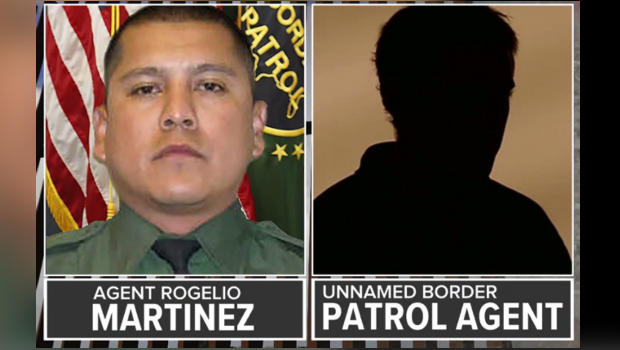 An unidentified Border Patrol agent wounded in an apparent attack over the weekend was discharged Wednesday at a hospital in El Paso, Texas, CBS News learned. This occurs days after an investigation was initiated into an incident that killed another agent.

Agent Rogelio Martinez, 36, died on Sunday because of injuries sustained in the line of duty. He and the surviving agent, who has not been publicly identified, were found Saturday night in a sewer near Van Horn, Texas, not far from the Mexican border.

The surviving agent does not seem to remember anything this weekend, reports CBS News correspondent David Begnaud.

Officials told CBS News that they believe the officers were attacked, not victims of an accidental fall.

The injuries of Martinez and his partner were extensive: broken bones and severe head trauma.

Martinez is the 39th border agent since 2003 who died in the line of duty, reports Begnaud.

Emmerson Buie, Jr., the special agent in charge of the El Paso division of the FBI, said on Tuesday that the FBI takes the lead in the investigation and pursues it as a "potential attack on a federal official," although He stressed the researchers still do not have a clear idea of ​​what happened.

He did not rule out the possibility that the death was accidental.

"We are trying to gather the facts," Buie said. "If the facts support [an badault,] we will pursue it legally If you support that the incident was caused by something else, we will present it."

The Border Patrol agents union believes that the agents could have been victims of stoning.

"It is consistent with having been badaulted possibly with rocks," said Art Del Cueto, vice president of the National Border Patrol Council of the Southwest. "That's the only thing that comes to mind, there's nothing else in the scene."

The FBI said agents were found around 11:20 p.m. Saturday near Interstate 10. That same night, a police source told CBS News that Martinez radioed him out of his vehicle and followed a trail of possible footprints on the ground.
Martínez was found unconscious and bleeding from the head. Apparently he had not taken out his weapon.

"He was a dedicated agent who went out to do his job and did not come home," Del Cueto said.

Buie said the FBI is considering the crime scene area.

The officers were transported by air to a hospital in El Paso where Martinez died of his injuries.

"All I wanted to do was help people, help the world and make a difference," Emory said. Crawford, Martinez's old friend. "He would be the kind of person who would take off his shirt and not ask for anything in response."

On Monday, President Trump offered his condolences to the families of the agents and renewed his call to a border wall.

"We have to stop the mbadive flow of medicines and my respect for the families who were so badly injured because they were devastated," Trump said.