Infosys: Infosys chooses Salil Parekh of Capgemini as its next CEO – tech2.org

Infosys: Infosys chooses Salil Parekh of Capgemini as its next CEO 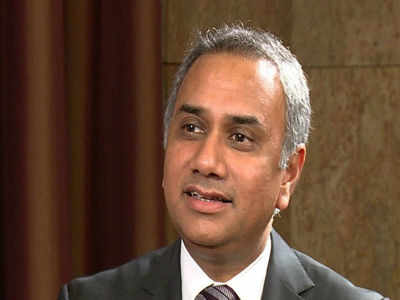 BENGALURU: After months of stress, turmoil and billions of dollars in the destruction of shareholder value, Infosys finally appointed a new CEO, Salil Parekh de Capgemini.

With Infosys' first attempt at a non-developer CEO in Vishal Sikka ending in bitter bitterness, accusations of governance loopholes, legal trials and a lot of dirty laundry laundered in public, the company expects to start the new year with a cleanup they point to Parekh, 53, based in Mumbai, who will lead the second largest IT services firm in the country.

The drama that surrounds the search for executive directors of Infosys has rivaled in recent times with what happened in the Tata Group. However, unlike the Tatas who finally chose a member of the community to be president of Tata Sons, Infosys has looked out again and brought Parekh, apparently to the great disappointment of the internal candidates. If this will lead to another round of exits it has to be seen.

Then, three and a half months after the surprise resignation of Sikka, the unprecedented attack of the Infosys board to the founding president Narayana Murthy and co-founder Nandan Nilekani return as president, the company designated 12,500 million euros on Saturday Capgemini Parekh's main consulting and technology services for a period of five years from January 2.

Parekh, who had been a member of the executive board of the Capgemini group (equivalent to the position of executive vice president), was the general manager of the company's financial services business in Europe, North America and Asia. He had been with the company for 17 years. 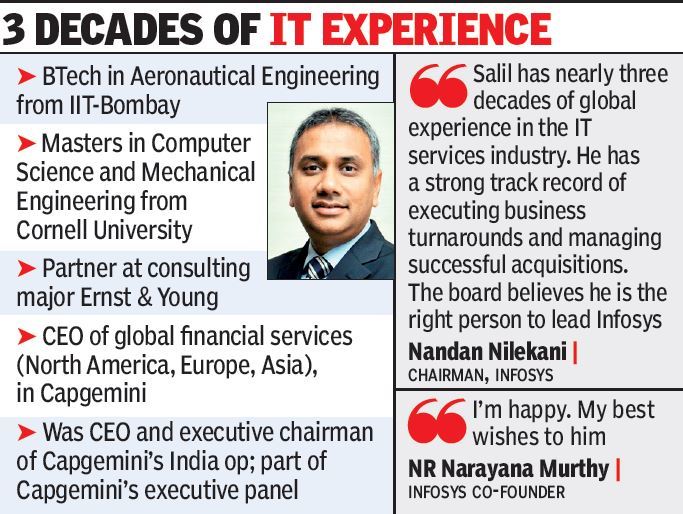 "We are delighted to have Salil joining as CEO and MD of Infosys.It has almost three decades of global experience in the IT services industry.It has a solid track record of delivering business and administration Very successful acquisitions The board believes that it is the right person to lead Infosys in this transformative moment in our industry, "said Infosys President Nandan Nilekani. Parekh, like Nilekani, is a former student of IIT-Bombay.

N R Narayana Murthy, founding president of the company and the man who spearheaded the indictment against Sikka for alleged failures in government and the diversion of Infosys cultural values, backed the new candidate. He said: "I'm happy that Infosys has named Salil Parekh as CEO, best wishes to him."

The previous Parekh employer issued a surprisingly short statement given its importance to the company and its rank in the hierarchy. "I would like to thank Salil for her participation in the Capgemini trip, Salil contributed in particular to the Group's development in India and the US," Capgemini president and CEO Paul Hermelin said in a statement.

Parekh has his work cut for him. Your first priority will be to amend frayed relationships with some of the promoters, especially Narayana Murthy, to ensure that a Sikka 2 does not happen again. The employee's morale is in landfills. Infosys went from being the gold standard in corporate governance and the most preferred employer to one in which to talk about overpriced acquisitions and unprecedented compensation packages and the confrontation between the board and the promoters led to bleeding people at the senior and senior levels. junior.

Infosys also hopes that Parekh's background in the financial services industry throughout his career will help him obtain more offers in the BFSI sector in Europe and North America. BFSI, the bread and butter for all IT services companies in India, contributed about 33 percent to the company's mainline for the second quarter ending September 30.

"It was the best choice among a group of highly qualified candidates, and with their solid track record and extensive experience, we believe we have the right person to lead Infosys," Kiran Mazumdar-Shaw, chairman of the nomination and compensation committee, said.

Parekh, who obtained the best position from a group of 30 candidates who were considered for the position, has a master's degree in computer science and mechanical engineering from Cornell University. He was a partner in global financial and audit firm Ernst & Young between 1992 and 2000 in financial services and joined Capgemini in 2000 as a result of the acquisition of the latter from Ernst and Young's consulting division.

As part of the appointment, Infosys said that interim CEO and MD Pravin Rao, a veteran of the company, will resign from his position, but will continue as director of operations and full-time director until August 2022. "The board of directors is I also thank Pravin for his leadership during this transition period, "added Nilekani.