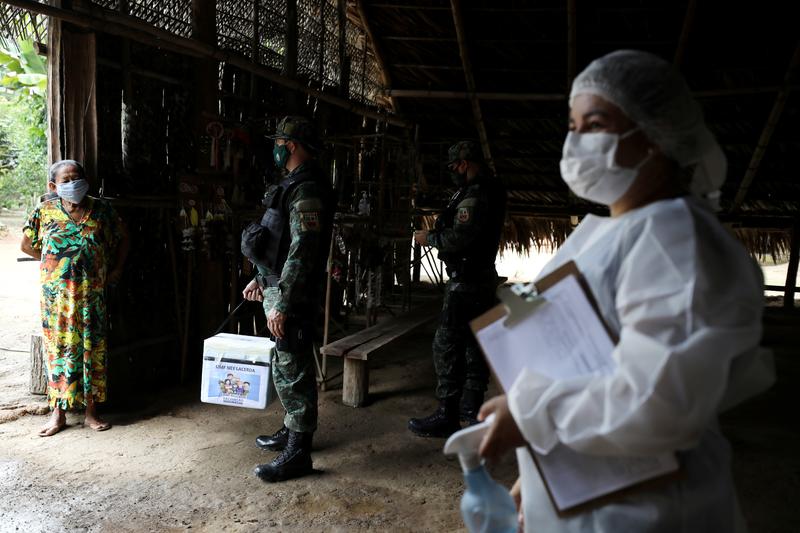 BRASILIA (Reuters) – Medical teams working to immunize Brazil’s remote indigenous villages against the coronavirus have met fierce resistance in some communities where evangelical missionaries are stoking fears of the vaccine, tribal leaders and advocates say.

In the São Francisco reserve in Amazonas state, Jamamadi villagers sent health workers with bows and arrows when they visited by helicopter this month, said Claudemir da Silva, a leader from Apurinã who represents indigenous communities in the Purús River, a tributary of the Xingú. .

“It is not happening in all the towns, only in those that have missionaries or evangelical chapels where the pastors are convincing people not to receive the vaccine, that they are going to become alligators and other crazy ideas,” he said by phone.

That has added to fears that COVID-19 could roar through Brazil’s more than 800,000 indigenous people, whose community life and often poor medical care make them a priority in the national immunization program.

Tribal leaders blame Brazil’s far-right president Jair Bolsonaro and some of his avid supporters in the evangelical community for stoking skepticism about coronavirus vaccines, despite a national death toll that is only behind U.S.

“Religious fundamentalists and evangelical missionaries are preaching against the vaccine,” said Dinamam Tuxá, leader of APIB, the largest indigenous organization in Brazil.

Many pastors in Brazil’s urban evangelical megachurches are urging their followers to get vaccinated, but say missionaries in remote territories have not gotten the message.

“Unfortunately, some pastors lacking in wisdom are spreading misinformation to our indigenous brothers,” said Pastor Mario Jorge Conceição of the Traditional Assembly of God Church in Manaus, the capital of the state of Amazonas.

The government’s indigenous health agency, Sesai, told Reuters in a statement that it was working to raise awareness about the importance of immunization against the coronavirus.

Bolsonaro has downplayed the severity of the virus and refused to vaccinate himself. He has targeted a special mockery of the country’s most widely available shot, made by China’s Sinovac Biotech, citing doubts about its “origins.”

At an event in December, the president ridiculed vaccine maker Pfizer because he said the company had refused to take responsibility for side effects in talks with his government.

“If you get vaccinated and become an alligator, it’s your problem. If you become Superman or women grow beards, I have nothing to do with it, ”said Bolsonaro sarcastically.

Pfizer has said that it proposed standard contractual guarantees to the Brazilian government that other countries accepted before using its vaccine.

Access to social media even in remote corners of Brazil has fueled false rumors about coronavirus vaccines.

For example, 56-year-old tribal chief Fernando Katukina, from the Nôke Kôi village near the border with Peru, died on February 1 of cardiac arrest related to diabetes and congestive heart failure. Word quickly spread on social media and radio that the COVID-19 vaccine he received in January had caused his death.

The Butantan biomedical center, which produces and distributes the Sinovac vaccine, was quick to convince the indigenous people that this was not the case.

“The social media messages saying that Fernando Katukina died after receiving the COVID-19 vaccine is fake news,” Butantan wrote in a tweet.

COVID-19 has killed at least 957 indigenous people, according to APIB, of some 48,071 confirmed infections among half of Brazil’s 300 native ethnic groups. The numbers could be much higher, because the Sesai health agency only monitors indigenous people who live on reservations.