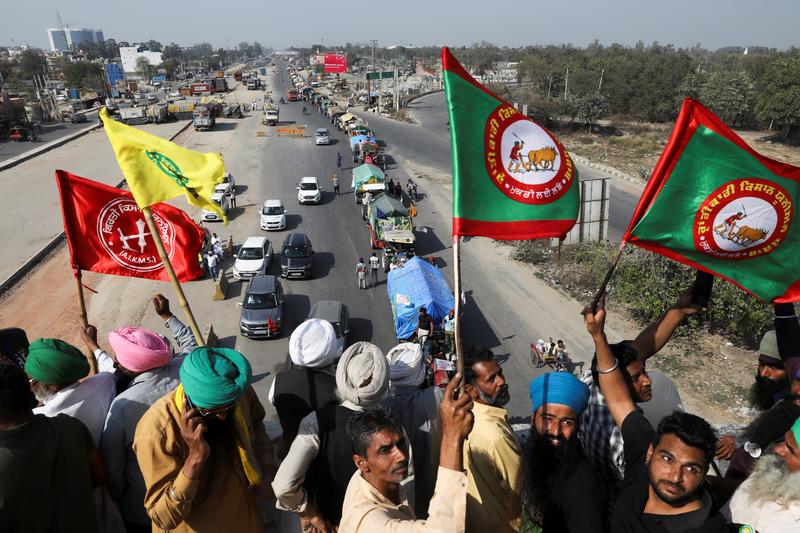 NEW DELHI (Reuters) – Indian farmers began rallying on Saturday to block a six-lane highway on the outskirts of New Delhi to mark the 100th day of protests against the deregulation of agricultural markets, to increase pressure on the government of Prime Minister Narendra Modi.

Farmers, young and old, headed out in cars, trucks and tractors to the road for a five-hour roadblock to oppose three farm laws enacted in September 2020 that they say hurt them by opening up the agricultural sector to actors. private.

Modi has called the reform laws much-needed for the country’s vast and antiquated agricultural sector, describing the protests as politically motivated.

“The Modi government has turned this protest movement into a matter of ego. They can’t see the pain of the farmers, ”said Amarjeet Singh, a 68-year-old farmer from the state of Punjab. “They have left us no choice but to protest.”

Tens of thousands of farmers from various northern Indian states have camped outside the capital in freezing cold since December to demand that the laws be repealed.

His movement has gained international attention and support, including from celebrities like climate activist Greta Thunberg and American singer Rihanna, but several rounds of negotiations between farmer leaders and the government have failed.

Modi’s government has lashed out at supporters of the protests, and human rights activists accuse it of using heavy-handed tactics to stop the protests.

While the protests have been mostly peaceful, a brief wave of violence on January 26 led to the death of one protester, and police have brought criminal charges against eight journalists for allegedly misreporting the day’s events.

“The response of the Indian authorities to the protests has focused on discrediting peaceful protesters, harassing government critics and prosecuting those who report the events,” Human Rights Watch said in a statement last month.

As the capital prepares for harsh summers and the harvest season begins, farmers who met on Saturday said they had no plans to return until their demands were met.

“The bitter cold did not affect our movement, and neither did the deadly heat,” said Raja Singh, a 58-year-old farmer from the state of Punjab.