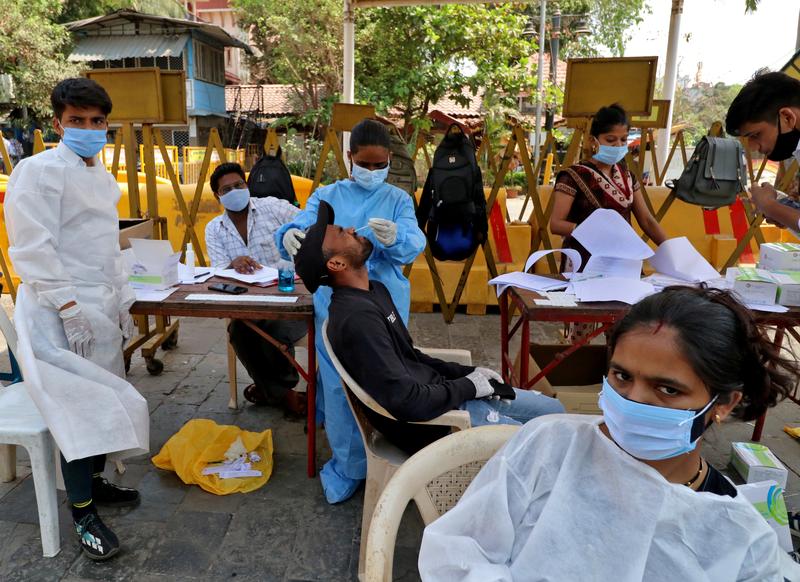 BENGALURU / NEW DELHI (Reuters) – The Indian capital of New Delhi imposed an overnight curfew until April 30 on Tuesday as much of the country struggles to contain a second surge in coronavirus infections that has overshadowed the first wave.

The next four weeks in India’s fight against COVID-19 will be “very, very critical,” said senior government health official Vinod Kumar Paul, warning that the respiratory disease was now spreading much faster than in 2020. .

“The pandemic has worsened in the country … There is a serious increase in cases,” Paul told reporters.

India, the second most populous country in the world with 1.35 billion people, has administered 80.9 million doses of vaccines, the most after the United States and China, but is far behind in per capita immunizations.

Frontline healthcare workers and the like, as well as people over the age of 60, have been the main recipients of vaccines so far. Vaccinations for people over 45 years of age began only on April 1.

Authorities in New Delhi implemented a 10 p.m. to 5 a.m. curfew a day after India first passed the grim milestone of 100,000 new infections a day. The curfew echoes harsh restrictions in Maharashtra, the country’s hardest hit state where the financial capital Mumbai is also located.

The increase in deaths from COVID-19 in the states of Punjab and Chhattisgarh is also cause for “extreme concern,” India’s highest-ranking health official Rajesh Bhushan told reporters on Tuesday.

Leaders of several states, including Delhi and Maharashtra, have called on the federal government for faster and wider rollout of vaccines, with some like Odisha repeatedly citing shortages even for priority groups like the elderly.

Coronavirus cases rose by nearly 97,000 on Tuesday, data from the Health Ministry showed. There were 446 new deaths, bringing the total to 165,547. With 12.7 million cases, India is the most affected country after the United States and Brazil.

Daily infections have risen many times since they hit a multi-month low in early February, when authorities relaxed most restrictions and people stopped wearing masks and observing social distancing.

India has recorded the highest number of infections in the last week in the world. More infectious variants of the virus may have played a role in the second surge, some epidemiologists say.

There is also widespread criticism of tens of thousands of people, mostly without masks, gathering for political demonstrations in four states that are now holding elections. Modi and some close cabinet colleagues have addressed the rallies.

There is also concern for tens of thousands of Hindu devotees gathered on the banks of the Ganges River in the northern state of Uttarakhand, ruled by the Modi party, for the week-long Kumbh Mela festival of pitchers.

Organizers initially expected more than 150 million people to arrive, although the numbers are likely to be much lower now due to the increase in COVID-19 cases.

(Interactive graphical tracking of the global spread of the coronavirus: here)

Reporting by Neha Arora in NEW DELHI and Sachin Ravikumar and Nallur Sethuraman in BENGALURU; Editing by Mark Heinrich