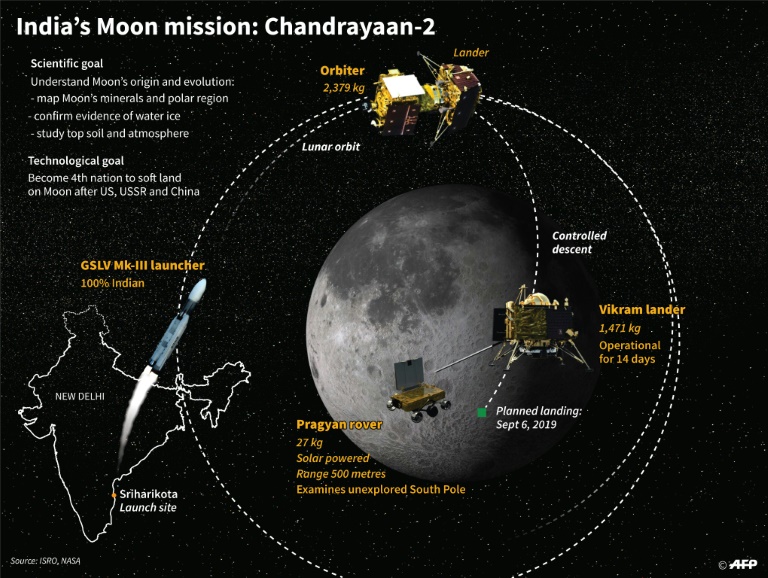 Mission of India Chandrayaan-2 to the Moon

SRIHARIKOTA, India: On Monday, India dramatically dropped the launch of a rocket that aimed to land a probe on the Moon less than an hour before takeoff due to a "technical" problem.

India wants the Chandrayaan-2 or Moon Chariot 2 mission to be the fourth country after Russia, the United States and China to land a ship on the lunar surface.

The countdown at the Satish Dhawan Space Center stopped 56 minutes and 24 seconds before the scheduled takeoff at 2.51am (4.51am Bangkok).

"A technical problem was observed in the vehicle launch system at minute T-56," said the Indian Space Research Organization (ISRO) on Twitter.

"As a precautionary measure, the release of # Chandrayaan2 has been canceled for today, the revised release date will be announced later."

Officials of the space center on an island off the coast of Andhra Pradesh state said the problem was with the vehicle's launch system.

ISRO had announced an hour before the launch that the filling of liquid hydrogen fuel had been completed.

The agency did not say when a new release could be made.

The attention in the Indian mission had increased since the launching would be carried out only five days before the 50 anniversary of the walk in the Moon of the American Neil Armstrong.

India had spent about $ 140 million on preparations for Chandrayaan-2 and had considered the mission one of the cheapest in history.

A landing on the Moon had been scheduled for September 6.

Almost the entire orbiter, lander and rover of Chandrayaan-2 were designed and manufactured in India.

India had prepared its most powerful rocket, the GSLV Mk III, to carry the 2.4-ton orbiter. The orbiter had to keep circling the Moon for about a year, taking pictures of the surface and sending information about the atmosphere.

The solar-powered rover can travel up to 500 meters and was expected to continue sending images and data for a lunar day, the equivalent of 14 Earth days.

Pragyan will look for water signs and badyze the lunar rocks and the ground.

India's first lunar mission in 2008, Chandrayaan-1, did not land on the Moon, but instead conducted a radar search using water.

A soft landing on the Moon would be a breakthrough in India's space program. National pride is at stake as Prime Minister Narendra Modi has promised that a manned mission will be launched into space by 2022.

India also has ambitions to land a probe on Mars. In 2014, India became the fourth nation to put a satellite into orbit around the Red Planet.