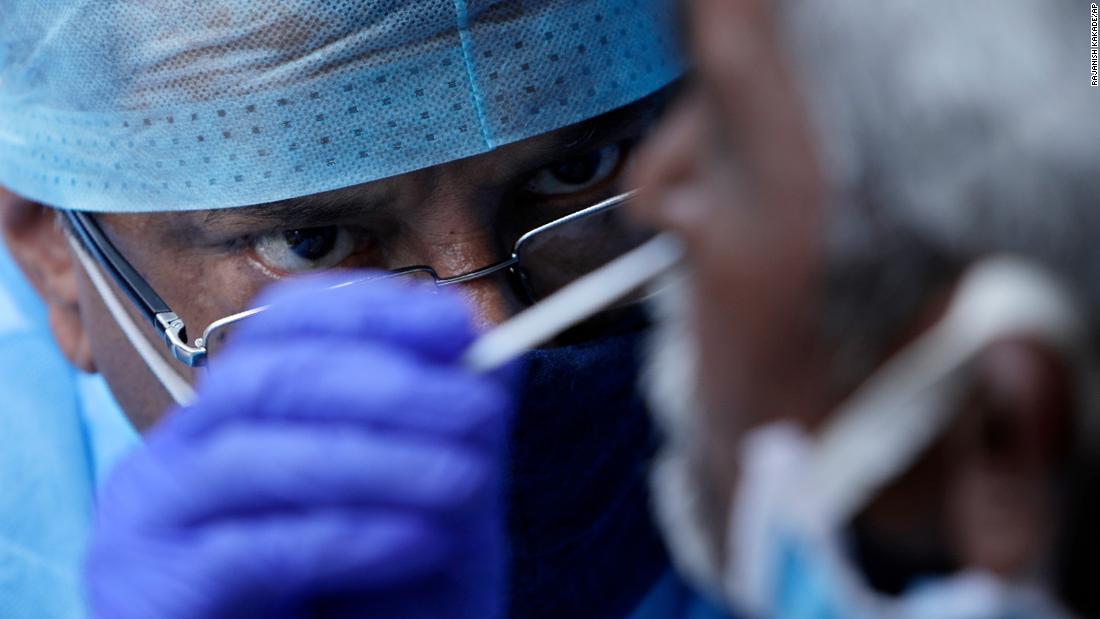 A “double mutant” variant is a virus strain that carries two mutations. It is not yet clear how many infections have been linked to this double mutant variant, or if the strain is more dangerous, but the ministry said “such mutations confer immune escape and increased infectivity.”

According to the ministry, the number of known cases related to the double mutation was not high enough to explain the current increase in infections across the country.

India recorded 53,476 new Covid-19 cases on Thursday, the highest increase in a single day in five months. The last time the daily count was this high was Oct. 23, according to a CNN tally of figures from the Health Ministry.

The country’s first wave of infections began to rise last summer and peaked in September, with numbers slowly declining since then. As of February this year, the number of daily cases had dropped by almost 90%, to about 10,000 per day.

But in early March, it became clear that cases were slowly increasing again, and have skyrocketed in recent weeks.

India has now reported a total of more than 11.7 million cases and 160,000 related deaths, according to data from Johns Hopkins University.

“I would say it is the beginning of a second wave,” Randeep Guleria, director of the Indian Institute of Medical Sciences, said Wednesday. “It is something that has already been seen in many European countries; it seems that we are following them.”

There are several factors: one is Covid fatigue and the possibility that people are less cautious due to the decrease in infections in the winter. “You see that in the community, when you go out, the use of a mask has become less and less,” said Guleria. “We see crowds developing, parties, a lot of marriage ceremonies are happening in India.”

Another factor could be the rise in “variants arriving in India from other parts of the world,” he said, pointing to the strain first detected in the UK, which has since spread to numerous states in India …

All viruses evolve over time and sometimes make changes when they replicate, causing mutations. Some mutations have little effect, but others could make the variant spread more easily or cause infections with more severe symptoms.

Out of around 10,787 samples analyzed by India’s SARS-CoV-2 Genomics Consortium from 18 states, 771 cases of worrisome variants were detected, most of which were the UK strain, according to the Health Ministry. Thirty-four were the variant first identified in South Africa and one was the P.1 variant from Brazil.

Although the ministry said that these are not correlated with the recent increase in cases, the variants have been detected mainly in states of “grave concern” that are registering the highest numbers, including Punjab and Maharashtra. And now double mutations have been reported.

So far this year in Maharashtra, “there has been an increase in the fraction of samples with the E484Q and L452R mutations,” the ministry said in its press release. They were found in 15-20% of samples and do not match any previously listed variant of concern, the ministry said, adding that “such mutations confer immune escape and increased infectivity.”

It is not unusual to see multiple mutations in a variant. “All of these viruses (variants) that we are dealing with are already mutants,” said virologist T Jacob John. The strain that became prevalent globally was already different from the first strain that originated in Wuhan, China, he added.

The strain first found in the UK, formally called variant B.1.1.7, has 23 mutations compared to the original strain found in Wuhan, according to the American Society for Microbiology.
The Brazilian variant known as P.1 has 17 mutations, and the South African variant known as B.1.351 also has multiple mutations, according to the US Centers for Disease Control and Prevention (CDC).

How dangerous a mutation is depends on where it occurs in the virus. For example, the South African variant has mutations that change the structure of the spike protein, which appears to affect the receptor-binding domain, the part of the spike protein most important for binding and infecting cells. Researchers are now investigating whether it could help the virus partly escape the effects of vaccines.

Guleria cautioned that a double mutation was not necessarily cause for alarm, as researchers are still investigating the effect of mutations.

“They are not clear what the meaning of this is,” he said. “Is it clinically important or is it just an observation? And that has to be linked to epidemiological data, which is what is being done.”

One question is which variants, and which mutations, could evade the effects of our existing vaccines.

“If someone was infected with the coronavirus six months ago, that person is immune to the non-mutated coronavirus,” John said. “But is the person still immune to the variants? (That has to be) studied.”

Meanwhile, Indian authorities are working to control the increase by implementing new restrictions and intensifying the country’s vaccine program.

India is administering two vaccines nationwide. One is Covishield, a vaccine developed by the University of Oxford and AstraZeneca and produced by the Serum Institute of India, the world’s largest vaccine manufacturer. The other is India’s first homegrown coronavirus vaccine, Covaxin, jointly developed by Bharat Biotech and the government-run Medical Research Council of India.

So far, India has administered more than 50 million doses of vaccines, with more than 8.1 million people fully vaccinated, according to Johns Hopkins University.

The Serum Institute of India not only produces the majority of vaccines for India, it is also responsible for many of the vaccines distributed to the rest of the world. In September last year, SII pledged to manufacture and administer 200 million doses of COVAX, a WHO vaccine alliance established to ensure fair access to Covid-19 vaccines.

But the SII has had to stop or delay its exports several times in recent months as global and domestic demand increased.

On January 4, India restricted the export of the AstraZeneca vaccine produced by IBS until at least March. “We were given a restricted license just to give it and hand it over to the government of India because they want to prioritize first for the most vulnerable and needy segments,” SII CEO Adar Poonawalla said at the time. “The only condition is that we can only supply to the government of India, we cannot sell it in the private market and we cannot export it.”

On Thursday, Reuters reported that India would likely delay deliveries of AstraZeneca vaccines to COVAX, citing UNICEF. India had temporarily suspended all major exports of AstraZeneca injections by SII to meet domestic demand, according to Reuters.

CNN has reached out to the SII, UNICEF and the Foreign Ministry for comment, but has yet to receive a response.

The Interior Ministry also unveiled new guidelines for infection control on Tuesday, which will run until the end of April. Some of the measures include quickly isolating positive cases and tracing their contacts within 72 hours.

Several cities and states, including Mumbai, Delhi and Odisha, have banned gatherings during Holi, the upcoming festival of colors, on March 28.