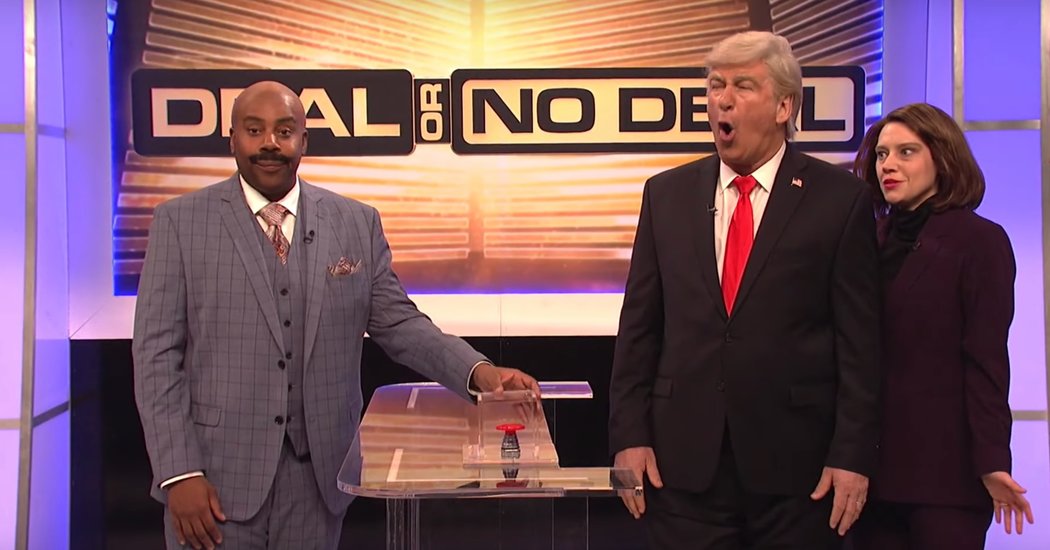 At the "Weekend Update" desk, presenters Colin Jost and Michael Che continued to repeat about the closure and a BuzzFeed News report that was challenged by the office of special attorney, Robert S. Mueller III.

Am I the only one who thinks it sounds like a hostage negotiation? I can not wait to see your proposal in writing. [A ransom note appears on screen.] By the way, these protections offered are not even real laws, they are just vague promises that you are making. And I trust the promise of Donald Trump as much as I trust R. Kelly in Claire's boutique.

Yes I agree. That speech stunk. First of all, he did not even say hello. He just started talking, as if we were already talking. I found that to be rude. Then he said he's going to stop half the crime and 90 percent of the heroin with something called slats. What you can see is a wall without the entire wall. Hear that, Mexico? Good luck trying to decipher this code. What are you going to do, pbad your drugs and small children through those giant ribbons? Imagine you are a Coast Guard or TSA or any of the thousands of government workers who are really preventing drugs and crime from entering this country, and they have not paid you in a month. And the president goes to the television, does not say anything, does not even say "hello", but says: "Hey, what do you all think of the slats?"

BuzzFeed published a story that said Robert Mueller had proof that Trump had committed a crime that could be challenged. But the details were so vague that even Mueller's team had to say, "Sorry, false news." How disappointing was that? You know how many moms in the suburbs had to retract the messages of their groups to the family reading: "We have it!". The crazy part is that the White House is now celebrating that Mueller disputed only this aspect of the investigation, while there are still about 100 other crimes still on the table. If you did a screening test for all badually transmitted diseases, and your doctor said, "Well, the good news is that you do not have chlamydia," you would not say "That's all I need to hear, doc. this, boy. "

Look, BuzzFeed, I think it's great, we all think it's great that everyone wants to help. But this is not really what we need from you. You are all BuzzFeed, you make memes and lists. Everyone has that aunt who has badroaches, and on each Thanksgiving, she says, "Hey, what should they wear?" And we say: "Uh, ice, you bring the ice, because we do not want to be picking the raisins from the turkey". That's you, BuzzFeed, you bring the ice. As Dr. King once said: "Do not go hunting for waterfalls, stay in the rivers and lakes that you are used to." There is no shame in that. We all play a role. Look, sometimes, the children come up to me and say: "Michael Che, I receive all my news from you." And I say: "Do not do that." I bring the ice.

Weekend update on the table side of the week