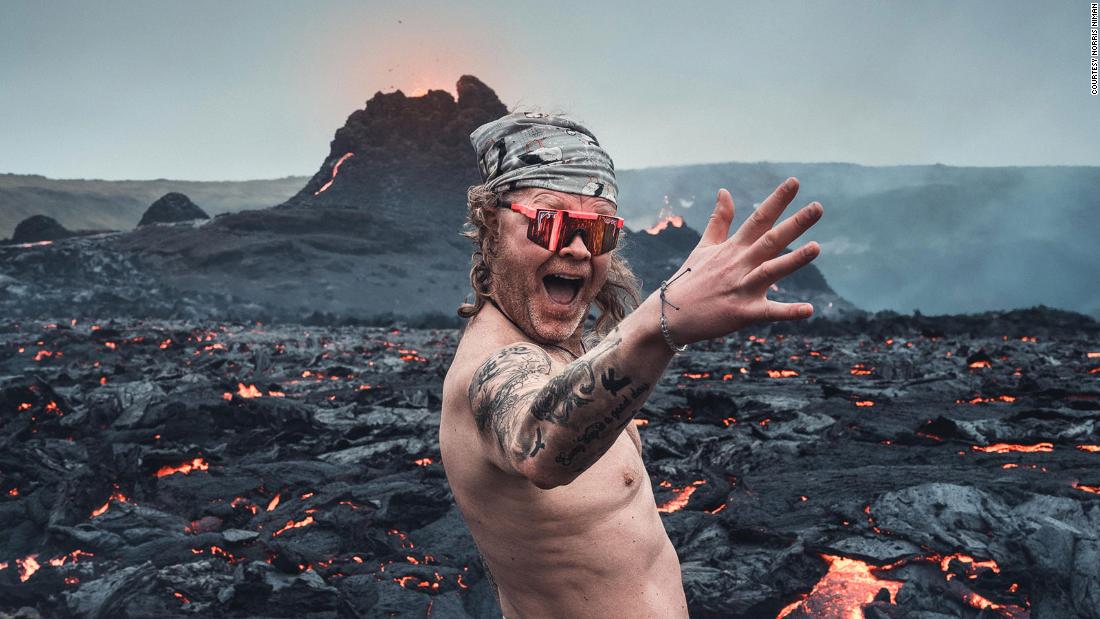 (CNN) – Taking off a few layers when things get hot can often be the most natural thing in the world.

But adventure tour guide Sveinn Snorri Sighvatsson has gone viral for doing just that while visiting Geldingadalur on Iceland’s Reykjanes Peninsula.
Their impromptu striptease took place as revelers gathered at the site of the erupting volcano to view the remarkable display, which began last Friday.
Sighvatsson, who works for the I Am Iceland travel company, was asked to model the Pit Viper shades as a favor and decided to get things rolling to ensure maximum exposure.

A volcano in Iceland erupted after tens of thousands of earthquakes disturbed the underground magma.

“My friends and I were joking about the nude photos in the lava field,” he tells CNN Travel. “One of my friends is a photographer and he was talking to me about these sunglasses. So I told him: ‘get your camera ready, I’m going to take off my clothes.’

The photographer who captured the moment was Norris Niman, who says he knew Sighvatsson was “the perfect man for a shot in the newly formed lava field.”

“A festival is not a true festival unless someone strips naked,” adds Niman. “And this, of course, was no exception.”

Sveinn Snorri Sighvatsson says the heat “washed over his skin” as he posed naked near the Geldingadalur.

But undertaking an impromptu photoshoot next to the site of an eruption was not an easy task and is definitely not recommended. In fact, visitors have been instructed not to get too close to the lava fountains.

“It was like being too close to a big bonfire,” adds Niman. “So we had about a minute to photograph this collection as we turned around so we didn’t broil too much to either side and with a large crowd watching.”

While his experience as an adventure guide meant he was able to assess danger and “get in and out” quickly, Sighvatsson emphasizes that anyone who “doesn’t know what they’re doing” should stay on high ground and avoid approaching lava fields.

“People don’t realize the gases that are there,” he says. “It’s okay to stay above that [the volcano] on the highest ground, there you are completely safe. But diving into it can be very, very dangerous.

“On Sunday there was a strong wind blowing, so the gases went in the opposite direction and we were fine if we stayed near the lava field. But if there is no wind, don’t go down there.”

Although the shoot lasted less than a few minutes, hundreds of people were there to witness it and the moment hit the Internet.

‘This eruption is something else’

Sighvatsson and Niman appear to be enjoying the attention sparked by their eruptive photoshoot, and while commentators haven’t focused their attention on sunglasses too much, their anonymous friend is also quite pleased with how things turned out.

“In fact, he sent a message saying that was the image he was waiting for,” says Sighvatsson, who has returned to see the volcano a couple of times in the past few days.

“I have seen all the eruptions here on the island since 1991, but this is something else.”

As crowds continued to gather in Geldingadalur, which is still spewing lava, Icelandic authorities have established a hiking trail to regulate the large number of visitors and the area is regularly patrolled to ensure everyone is safe.

“However, with the warning, don’t get too close.”