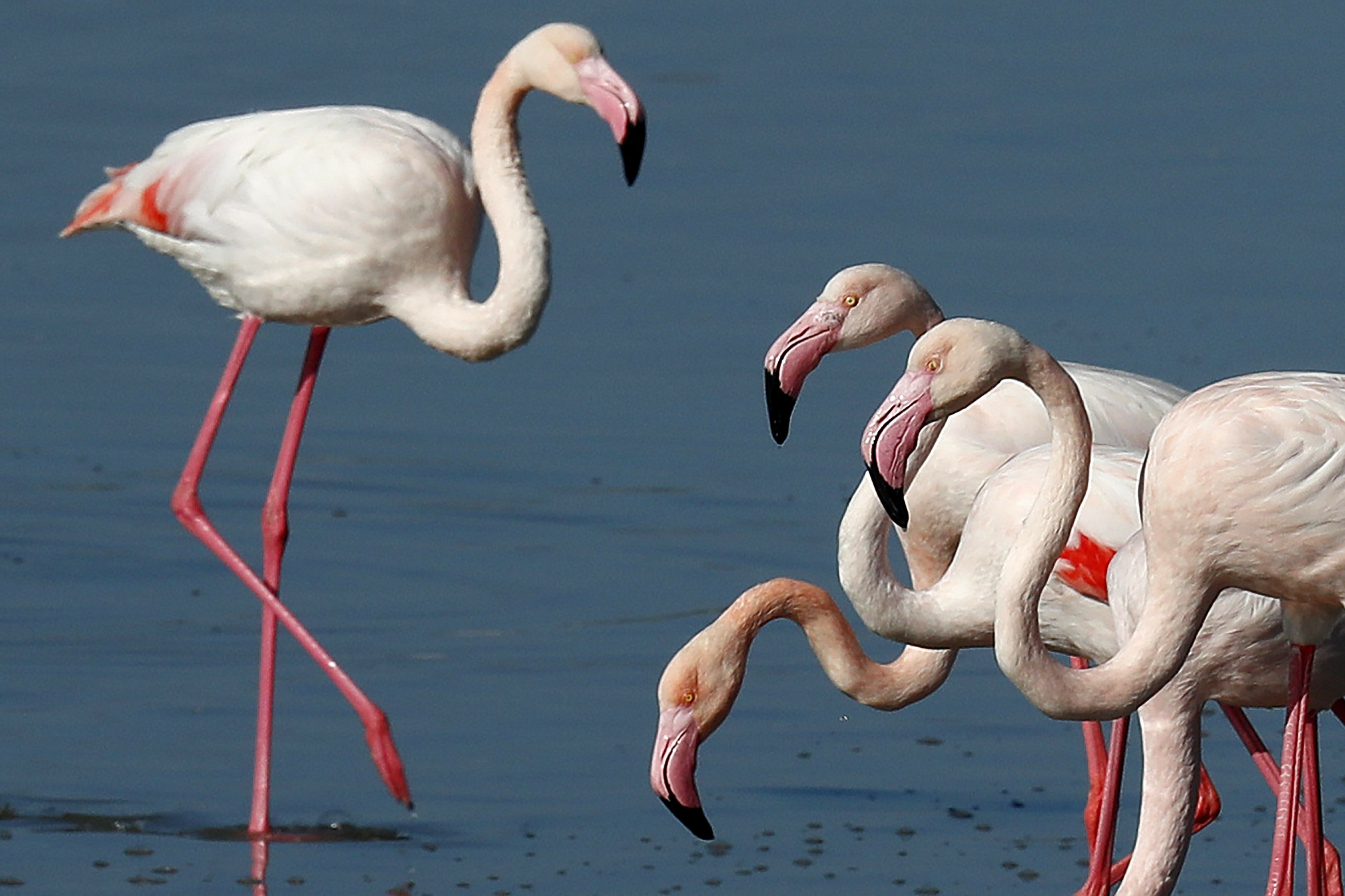 LARNACA, Cyprus (AP) – Cyprus conservationists are urging authorities to extend a hunting ban on a network of coastal salt lakes amid concerns that migratory flamingos could swallow lethal amounts of lead shot.

Martin Hellicar, director of Birdlife Cyprus, said flamingos are at risk of ingesting the tiny granules found in the lake bed while feeding. Like other birds, flamingos swallow small stones to aid digestion, but cannot distinguish between stones and lead granules.

“Last year, we had dozens of flamingo losses,” Hellicar said.

Cyprus is a key stop on the migration route for many types of birds that fly from Africa to Europe. Larnaca’s salt lake, a network of four-lake wetlands, typically hosts up to 15,000 flamingos from cooler climates on the island nation’s southern coast in the eastern Mediterranean. They stay for the winter and leave in March. Other waterfowl that frequent the lake include ducks, waders, and seagulls.

Hunting is prohibited in most of the salt lake, but hunters can still shoot ducks at the southern end of the net.

The government Game and Wildlife Service says that in the first two months of last year, 96 flamingos were found dead in the Larnaca Salt Lake wetlands as a result of lead poisoning. Cyprus Veterinary Services official Panayiotis Constantinou, who has performed autopsies on flamingos, said the lead in the granules poisoned the birds.

The high death toll is primarily attributed to heavy winter rains two years ago that churned up the lake’s sediment and released embedded lead shot.

A sports shooting range near the northern end of the lake closed nearly 18 years ago and authorities organized a cleanup of lead shot from the lake bed.

But Hellicar says the cleanup was apparently incomplete. A study funded by the European Union is underway to identify where significant amounts of lead granules remain so that they can be removed. Preliminary results of the study showed “very high” lead levels at the southern end of the wetland and continued duck hunting there could exacerbate the problem, Hellicar said.

“The problem is pronounced,” he said. “The danger is real for the flamingos and other birds that use the area.”

Cyprus Hunting Federation official Alexandros Loizides disagrees, saying hunting in a 200-meter northern strip is not a problem due to the limited number of hunters. He said he is unaware of the flamingo deaths in the area and criticizes the runoff of pesticides and fertilizers from nearby farms for creating pollution problems that harm wildlife.

“I think the effect of hunting there is very small in the specific part of the lake,” Loizides said. “It would be a shame if the hunters lost the only area where hunting is allowed near wetlands.”

The ban on the use of lead granules near wetlands has been in place in Cyprus for several years. A similar EU-wide ban went into effect last month, but conservationists believe the laws are not being enforced enough.

Pantelis Hadjiyeros, head of the Game and Wildlife Service, said it is less important to ban hunting in the area than to convince hunters to stop using lead shot shells.

“People should be taught that the use of lead granules is prohibited near wetlands and that only steel granules are allowed,” Hadjiyeros told The Associated Press.