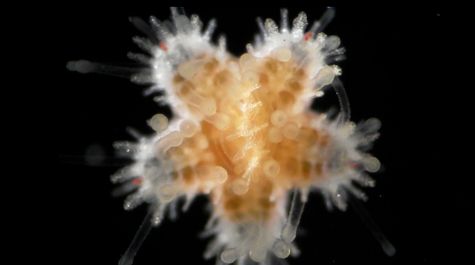 Baby starfish may look innocent and adorable, but they are little cannibals and eat their own siblings for their own survival, according to a new study.

Two researchers discovered this behavior among Forbes baby starfish (Asterias forbesi) accidentally. They were originally trying to understand how baby starfish reacted when presented to ferocious crab predators in the lab.

“But they all started eating each other before we even introduced the crabs. So we had to scrap that experiment,” said Jon Allen, associate professor in the Department of Biology at William & Mary. said in a statement. So Allen and his team switched gears to observe this previously unknown phenomenon among baby starfish.

Related: Dangers in the deep: the 10 scariest sea creatures

Forbes starfish, commonly found on the east coast of the US, can reach between 4.7 and 9.4 inches (11.9 and 24 centimeters) in length when they are adults. according to National Geographic. Juvenile starfish are basically pinhead-sized versions of their parents, Allen said. These starfish undergo a process called metamorphosis in which they transform from an immature form to an adult form just like caterpillars transform into butterflies.

These starfish, in their immature larval form, look like “weird little spaceships” flying through the water, said Karina Brocco French, a doctoral student at the University of California, Irvine (who was an undergraduate student working at the Allen’s laboratory during this investigation). They remain in this strange spacecraft stage for about a month before they metamorphose into juvenile starfish and settle on the seafloor, Brocco French said in the statement.

French and Allen discovered that baby starfish engaged in this cannibalistic behavior as early as four days after metamorphosis. They did this by using one of their multiple stomachs, known as their “heart stomach,” which they push out to gobble up and break down their food.

While such behavior was unknown in this species, cannibalism is not uncommon in the animal kingdom, with more than 1,300 species (including humans) documented to exhibit it, according to the statement. And the researchers believe cannibalism is likely even more widespread among small animals, including juveniles.

The findings were published on March 26 in the journal Ecology.