How the WCC Tournament takes place in very different circumstances 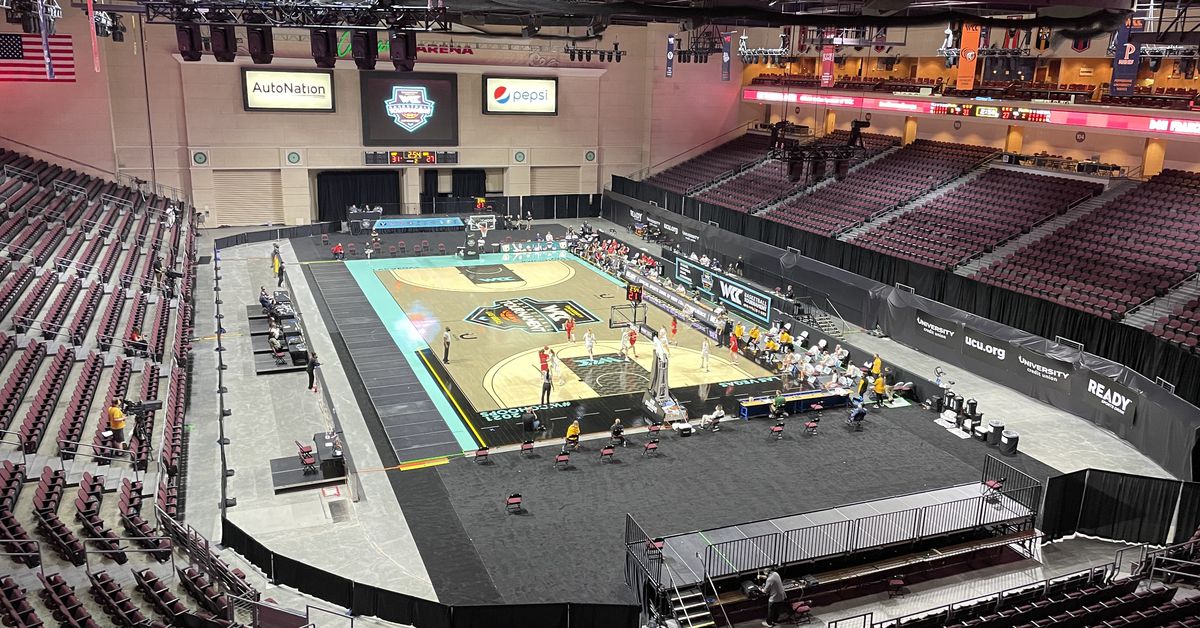 LAS VEGAS – It was an exciting days of basketball at Orleans Arena this past March, with some instant classic games and instant classic performances, thrilling the crowds in attendance.

But no one had a clue of the dramatic changes that were coming.

Then, two days later, in the semifinals, Gonzaga, ranked No. 2 in the nation, edged out San Francisco 81-77. That was followed by Saint Mary’s 51-50 win over No. 14 BYU in the semifinal cup when Ford hit a winning jumper with 1.4 seconds left.

The Zags defeated the Gaels the following night to claim another WCC Tournament championship.

“We are meeting or exceeding state, local and federal guidelines in all facets of organizing this event. WCC protocols and procedures reflect what teams will experience at the NCAA Tournament. By not allowing fans, friends and family to enter the arena, we are further minimizing risks and making the health and safety of students and athletes the priority. “- WCC Spokesperson Ryan McCrary

Just a few days later, college basketball, the NCAA Tournament, and apparently the world, shut down due to the pandemic.

In 2020, the WCC was one of the few conferences to complete its tournament. Many other league tournaments, which started later, ended abruptly or were canceled due to the spread of COVID-19.

“I remember how much we did not know and how quickly we began to learn and know what it all meant with COVID-19,” recalled WCC Commissioner Gloria Nevarez. “We entered that tournament knowing it. We had protocols. We were in hypercleaning and disinfection mode. But our social distancing didn’t exist yet. We are talking about fist bumps instead of handshakes. It wasn’t until the NBA canceled that everything changed. So it’s amazing how much time has passed. I never really imagined that we would have the same conversation until next year’s tournament. “

Here we are, a year later, and the WCC Tournament is back, but in very different circumstances, in an almost completely empty arena.

The conference, and its 10 member schools, have been planning this event for months to ensure that the WCC Tournament can be played safely. The WCC worked closely with City of Las Vegas medical staff and Clark County officials. The league considered countless contingency plans as the pandemic continued.

As it turned out, 19 of the 20 WCC basketball teams (only the San Diego women’s team is out due to COVID-19 issues) are in Las Vegas for this year’s tournament.

This time, of course, no fans are allowed in the arena. There are no bands, no cheerleaders, no pets. The pomp and spectacle that defines the conference tournament does not exist this year.

Unlike other years, famous ESPN analyst Dick Vitale doesn’t roam the bowels of Orleans Arena between games. The announcers in the venue have to use their “golf” voices during free throws because there is a lot of silence inside the arena.

There are a limited number of members of the media available, sitting on the upper reaches of Orleans Arena, about a $ 10 cab ride from the court.

“We are meeting or exceeding state, local and federal guidelines in all facets of organizing this event,” said WCC spokesman Ryan McCrary. “The WCC protocols and procedures reflect what teams will experience at the NCAA Tournament. By not allowing fans, friends and family to enter the arena, we are further minimizing risks and making the health and safety of students and athletes the priority. “

Nevarez explained why the conference decided not to allow fans this season.

“This is certainly a difficult decision, but it is the responsible decision of the WCC,” he said. “The WCC Tournament has sold out since the event moved to Las Vegas 13 years ago, and we value the passionate fan base and the ability of the friends and family of our student-athletes to support their teams each year. Unfortunately, we are in an unprecedented time and we must take unprecedented action.

“The guiding principle in everything we discuss is the health and safety of our participants,” Nevarez continued. “Limiting the number of people inside the Orleans Arena who are not subject to our security tests and protocols helps to provide the safest environment for our tournament to run. While Clark County has provided the opportunity to have a limited number of spectators for our event, we made this decision to allow us to be in the best position to protect our student-athletes, staff, and everyone at our event. “

For teams with hopes of the NCAA Tournament, staying healthy is crucial to avoid jeopardizing their chances of playing in the Big Dance due to COVID-19 issues.

BYU coach Mark Pope said the experience at this year’s WCC Tournament will be “super different” than last year. The Cougars wait until Sunday night to travel to Las Vegas before Monday’s semifinal game.

“Our idea is that we are going to try to give ourselves as little external exposure as possible. We are going in on Sunday night because we have to do the test at a certain time on Sunday night. So we’re going to land, go straight to our test appointment, and then go straight to our rooms. We will be quarantined there, except for target practice and games. We are taking the utmost precaution. “- BYU Coach Mark Pope

“Our idea is that we are going to try to give ourselves as little chance of external exposure as we can,” Pope said. “We are going in on Sunday night because we have to test at a certain time on Sunday night. So we’re going to land, go straight to our test appointment, and then go straight to our rooms. We will be quarantined there, except for target practice and games. We are taking the utmost precaution. That part is on the back burner, but we clearly felt the reality of missing this opportunity last year and we will probably be forever scarred by that. So we are being incredibly cautious and trying to take every precaution possible, including making this trip so compact and making it the least exposed trip. “

BYU women’s basketball coach Jeff Judkins, the WCC women’s coach of the year, said his team, which also plays in the semifinals on Monday, planned to depart for Las Vegas on Saturday afternoon.

“In the past, we would have come down on Friday night and we would have seen our opponent. We cannot see our opponent live. So we went down on Saturday afternoon, ”he said. “We will do our normal things as if we are preparing for a game. On Sunday, we will let them relax and have some kind of Sunday (religious) service. We will do that and keep you busy doing some things as a team. We are a little used to this. “

Teams have been going through the pandemic all season and even going back to last summer.

“All this year we have not been able to go anywhere. We had to stay, stay inside. That’s why being Coach of the Year this year is quite amazing because of what we had to do, all the teams, stay in, ”Judkins said. “You had to stick to your players to watch out for COVID-19. But I think we are used to it. We are more prepared for that. That is a big part of coaching. It’s not always the X’s and O’s, but it’s all the other things you’re trying to do. But I have a really good team with really good leadership. They want to win. … We will have to be careful with (the virus). We can take a walk around the hotel. I do not know. We’ll see what we can do. “

Regardless of the outcome of the WCC Tournament, this one promises to be very different from last year’s version and from any other tournament that preceded it.